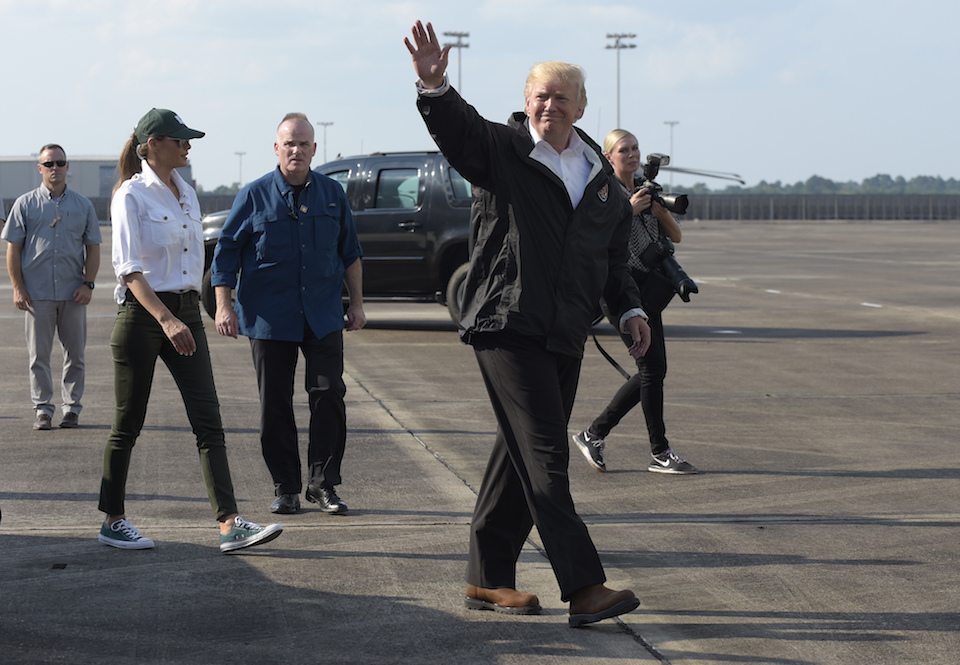 Donald Trump met with first responders in Houston, Texas, Saturday, and offered yet another ignorant and appalling take on the hurricane.

Donald Trump would never be mistaken as an overly empathetic person. But even he managed to outdo himself while meeting with first responders in Houston.

Trump was on his second visit to Texas in the wake of Hurricane Harvey, attempting to do-over after the public relations mess of his first trip.

In that first visit, mainly to Corpus Christi, Texas, Trump bragged about the crowd size like he was at a campaign rally, joked about looking forward to being congratulated for relief efforts, and failed to even mention the victims of the storm.

So when he took the second trip, this time to Houston now that the immediate dangers had receded, it was a chance for him to show that he does, in fact, know how to behave like a normal human being.

While ambling around NRG Stadium, taking pictures with locals and half-heartedly handing out a few boxes of food, Trump — of course — made sure to work in some self-praise and a nasty little dig at the media while speaking to reporters.

He even made a bizarre joke about his hands being too big — something he will never let go of, despite all appearances to the contrary — for the gloves he was wearing to handle the food.

But the most ignorant and callous moment came when he was greeting first responders at Ellington Field in Houston.

As Trump moved through the crowd of service members, he asked them how the weather was — the weather in a hurricane — and wanted to know, "How did that compare with some of the bad storms you've seen? ... Is this about as bad as it gets?"

One of them told him about the 60-mile per hour winds, but said that their equipment could handle stronger ones, and that, as the Coast Guard, "We'll go out in anything, sir."

"Better you than me, pal!" he snickered.

Exchanging amicable greetings and commentary with the first responders is all well and good. Surely they appreciated a moment to relax and lighten the mood after the strenuous work they've done for days.

But the snark of saying "Better you than me" — possibly the same thought Trump has had before — was inappropriate, ignorant, and appalling, even from Trump.

This second visit to Texas was absurdly billed by some as Trump's second chance to be the "consoler-in-chief."

Not much consolation is laughing about others risking their lives in a storm while he "witnesses" the devastation from a conference room.