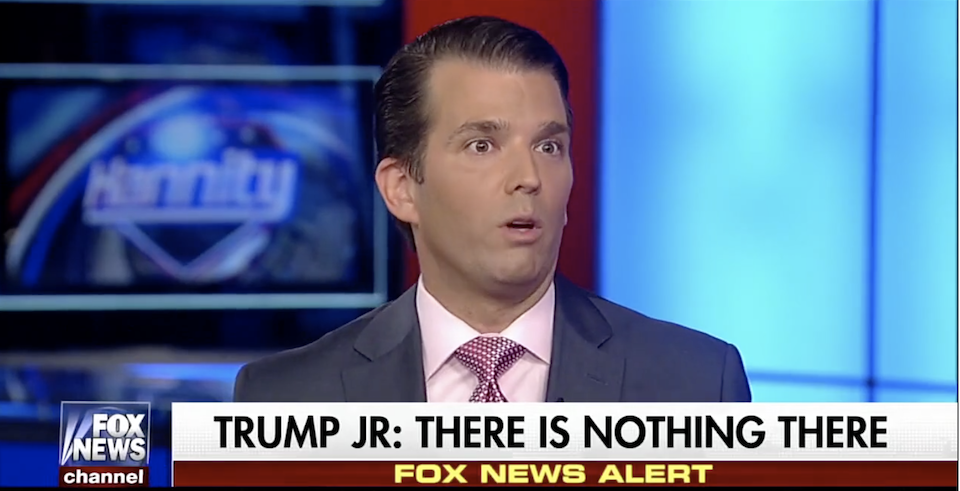 Donald Trump Jr. admitted in a Fox News interview that he had "probably met with other people from Russia" to talk about influencing the presidential election, raising more questions and concern about collusion and his father.

Appearing on Fox News in an attempt to squelch concerns about his meeting with a Russian operative on behalf of the Trump campaign, Donald Trump Jr. admitted to Sean Hannity that he probably had even more meetings with Russians.

Sean Hannity, who has become well-known as the most pro-Trump apologist on a network jam-packed with Trump shills, asked "Did you ever meet with any other person from Russia?"

Trump Jr. immediately responded, "I don't even know." He quickly amended the statement, saying, "I've probably met with other people from Russia," and adding that the meetings were "certainly not in the context of actually a formalized meeting or anything like that."

He did not explain what that meant or why it would matter. As far as collusion, it wouldn't matter how formal the meeting was. He was a part of his father's campaign, and colluding with a hostile foreign power to influence the outcome of an election would not be OK under any scenario, formal or informal.

HANNITY: Did you ever meet with any other person from Russia that you know of?

TRUMP: I don't even know. I've probably met with other people from Russia, certainly not in the context of actually a formalized meeting or anything like that. Because why would I? You know, in the grand scheme of things, how busy we were, it was much more important to do — this was a courtesy to an acquaintance.

As he has continued to do ever since reporters began uncovering this story, Trump Jr. made things worse for himself and his father's administration.

Laughably, Hannity told Trump that he could not think of any further follow-up questions, and did not press Trump Jr. on this point — or any others.

But special counsel Robert Mueller, the congressional panels investigating the election, the FBI, and millions of American citizens certainly can.