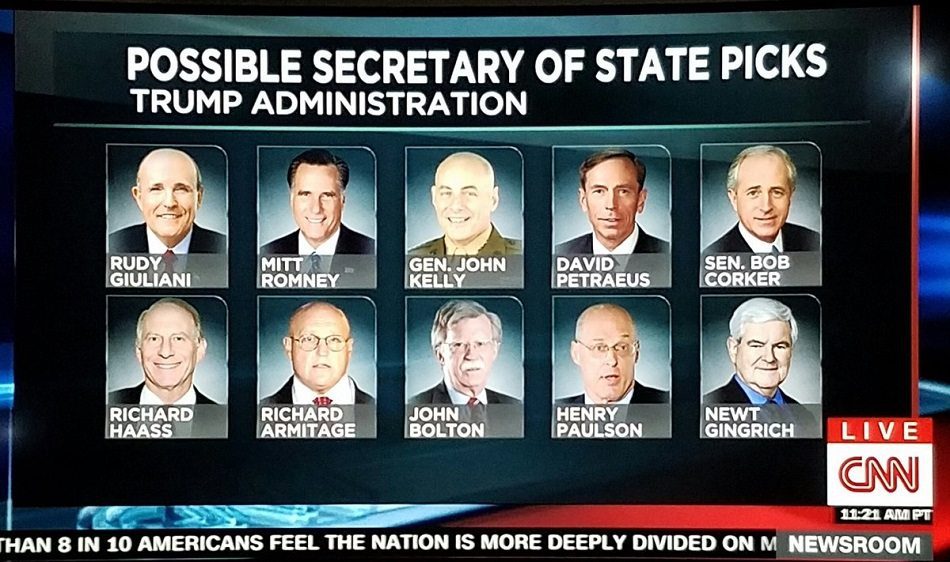 Donald Trump's presidential campaign had many moments of blatant misogyny, and the man himself is a serial offender on that score. It is therefore hardly a surprise that his cabinet appointments and considerations include few women, but it is still a disappointment.

President-elect Donald Trump has made nine cabinet and staff appointments thus far, only three of whom are women: Betsy DeVos as Secretary of Education; South Carolina Republican Governor Nikki Haley as Ambassador to the United Nations; and Kathleen McFarland as Deputy National Security Adviser.

It is worth noting that DeVos and Haley both bring a significant amount of baggage to their respective positions — but it is baggage that will fit in well with the Trump administration. Thus, in his picks that have been noted for bringing "diversity" to his staff, Trump is still ensuring an ideological homogeneity.

Further, his list of potential contenders for secretary of state is 100% male, while Monday's interview schedule includes eight appointments, only one of which is with a woman:

Donald Trump continues to show his disregard for women and families with each new administration pick. From Nikki Haley to Jeff Sessions to Betsy DeVos, all of these Trump appointees have supported dangerous policies that hold women back and marginalize communities of color and LGBT Americans. Regardless of gender, these picks are more of the same from a presidential candidate who offended and disparaged women at every chance he had.

A president's administration should reflect the country over which it governs — that is, if that president is truly concerned with serving the needs of all of the people who make up that country. And efforts to bring diverse voices to the table ring hollow if the people are only chosen to deflect criticism, and not because of their actual qualifications and aptitude for their respective positions.

This was something that Hillary Clinton understood and valued. She ran a campaign that truly represented the United States and featured impressive, accomplished women staffers. Most importantly, she promised during a town hall with MSNBC, "I am going to have a Cabinet that looks like America, and 50 percent of America is women."

How starkly different the political landscape and the incoming White House team would be if the events of November 8 had written another history.