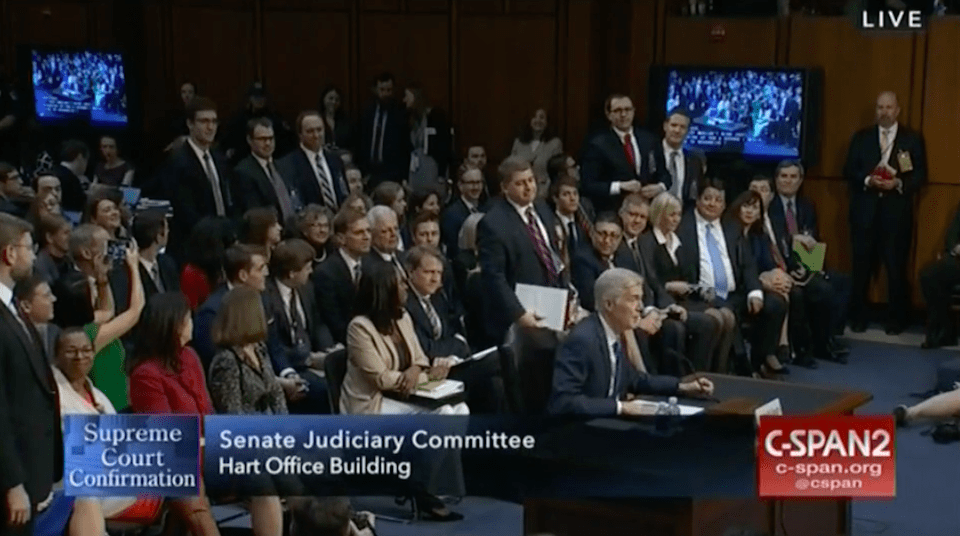 During his confirmation hearing, Supreme Court Justice nominee Neil Gorsuch asked his law clerks in attendance to stand up to be recognized. Unsurprisingly, they were all men.

Judge Neil Gorsuch is already facing an uphill battle in the confirmation hearings on his Supreme Court nomination. Democrats have long been on record that they will oppose Gorsuch, noting that the open SCOTUS seat was stolen from President Obama.

And Gorsuch himself has provided ample reason to be gravely concerned about a lifetime appointment to the highest court in the nation, including his exaggerated claims of volunteerism, his harmful ideas regarding rights for the disabled and for employees who become seriously ill, and his cowardly decision to only voice his criticism of Donald Trump behind closed doors.

Furthermore, Gorsuch has a dismal record on women's rights, evinced in odious fashion by reports that he told his law students that companies should ask women seeking employment about their plans for having children, warning about "the problems women pose for companies and the protections that companies need from women."

It is perhaps not surprising then — though still objectionable — that Gorsuch would be joined at his confirmation hearing by only male clerks.

During the hearing in front of the Senate Judiciary Committee, Gorsuch took a moment to acknowledge his law clerks in attendance, asking them to stand up to be recognized. As far as the cameras could see, all of the clerks were men.

GORSUCH: And I've got a whole bunch of my law clerks here in the audience, and if they wouldn't mind just standing up for a second, I'd like to recognize them, because [looking behind him] I consider them family, too. So, Senator, I'm very blessed to have so many family here with me today.

Though Gorsuch has had women as clerks, seeing at least seven men and zero women stand up in that room to be counted among Gorsuch's "family" drives home the fact that this is someone who not only does not care about women's equality, but who is actively hostile to the concept and unconcerned about the optics that seem to confirm as such.

All of which makes it distressingly clear why Gorsuch was Donald Trump's choice for the Supreme Court — and why his nomination should be vehemently resisted.