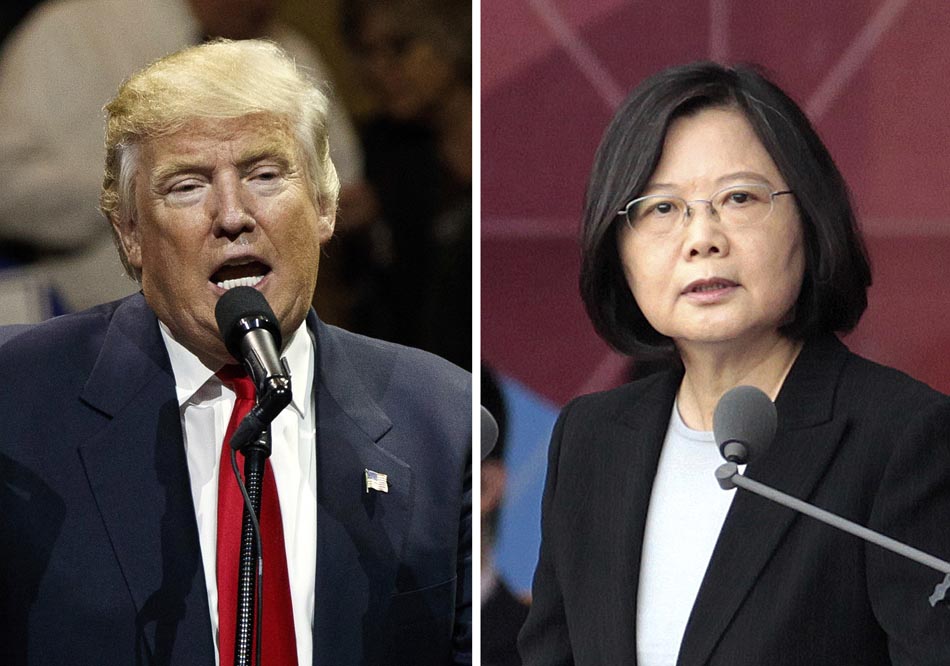 (AP Photo/Evan Vucci, Chinag Ying-ying, File)
Get The American Independent in your inbox

President-elect Donald Trump's provocative call with Taiwanese president Tsai Ing-wen was not just a diplomatic failure; it also raises yet more questions about his many conflicts of interest, as reports emerge that the Trump Organization recently explored expansion into Taiwan.

Donald Trump's call with Taiwanese president Tsai Ing-wen was troubling for a number of reasons, starting with the fact that the U.S. president-elect lurched abruptly from 37 years of foreign policy, without even a heads-up to President Obama, who is still the sitting president.

Expectedly, news of the call prompted firm opposition from the Chinese Ministry of Foreign Affairs, whose spokesman Geng Shuang issued a terse statement:

We have noticed relevant reports and lodged solemn representation with the relevant side in the United States. I must point out that there is only one China in the world and Taiwan is an inseparable part of the Chinese territory. The People's Republic of China is the sole legal government that represents China and that is an internationally recognized fact. The 'one China' principle is the political foundation of China-US relations. We urge the relevant side in the US to adhere to the 'one China' policy, abide by the pledges in the three joint China-US communiques, and handle issues related to Taiwan carefully and properly to avoid causing unnecessary interference to the overall China-U.S. relationship.

Trump's reckless behavior has further raised questions about his vast and varied conflicts of interest. The New York Times reports:

Newspapers in Taiwan reported last month that a Trump Organization representative had visited the country, expressing interest in perhaps developing a hotel project adjacent to Taiwan Taoyuan International Airport, which is undergoing a major expansion. The mayor of Taoyuan, Cheng Wen-tsan, was quoted as confirming that visit.

A spokeswoman for the Trump Organization, Amanda Miller, said that the company had “no plans for expansion into Taiwan,” and that there had been no “authorized visits” to the country to push a Trump development project. But Ms. Miller did not dispute that Anne-Marie Donoghue, a sales manager overseeing Asia for Trump Hotels, had visited Taiwan in October, a trip that Ms. Donoghue recorded on her Facebook page.

The Taiwanese report noted that the president-elect's son, Eric Trump, was to "come to Taiwan personally to see about the potential business opportunity by the end of the year."

These reports once again raise concerns that Trump's business interests, and his plan to turn over his business to his children, will continue to cause major conflicts of interest during his presidency. Unless and until he solves this dilemma by taking the meaningful actions of disclosing his tax returns and business financials, fully divesting himself, and ending brand licensing deals, these serious concerns will not go away.

A seemingly less solvable problem is Trump's tendency, as described by former U.S. Ambassador Christopher Hill, to "wing it."

"It was an example of what is all too often happening now with this incoming administration, this tendency to wing it," he told CNN's Erin Burnett. "This is not going to be the last of these kind of things. So, things need to get cleaned up and cleaned up in a hurry in Washington."

Indeed. But by whom?

If Trump's reckless and impulsive approach to foreign policy can even be restrained, the person who can accomplish that is not apparent. Frighteningly, he does not appear inclined to restrain himself.