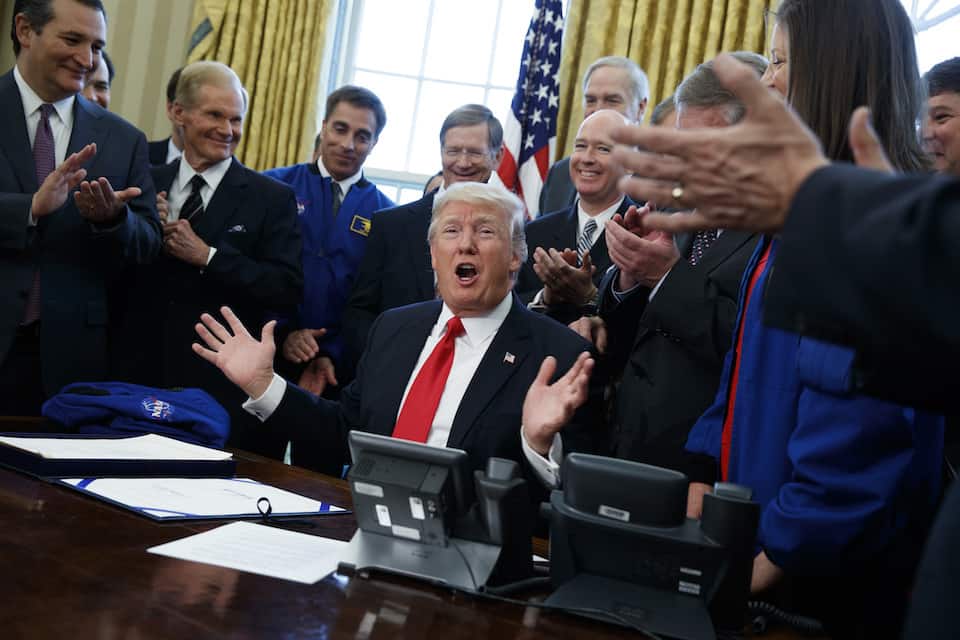 For a man who regularly said America had become the butt of global jokes, Trump may have finally made his own spin a reality.

World leaders are using America as a punchline to their jokes, thanks to Donald Trump's use of his position to promote nonsensical conspiracy theories.

For years Trump complained that American leaders were making the country a laughingstock. During the Reagan era, Trump took out a full page newspaper advertisement alleging "The world is laughing at America's politicians," and concluded, "Let's not let our great country be laughed at anymore." During his presidential run, assessing President Obama's leadership Trump said, "The world is laughing at us."

Now, under Trump, America truly has become the butt of international jokes, thanks to his conspiratorial behavior.

After Trump repeatedly promoted and defended the baseless theory that his predecessor President Barack Obama had his Trump Tower building wiretapped, international leaders began using the incident as a joke.

While meeting with Trump at the White House, Iraqi Prime Minister Haider al-Abadi grabbed Trump's arm and told the press in attendance, "We had nothing to do with the wiretap."

Former British Prime Minister David Cameron told an audience that since he left office, "I don't have to listen anymore to the wiretaps of Donald Trump's conversations."

When world leaders start to talk about the American presidency the same way late night comics do, that's a sign of how beyond the boundaries of normal conversation the president has gone.

Both the heads of the FBI and the NSA debunked and denied Trump's wiretapping conspiracy, yet he and his administration continue to emphasize the unfounded allegation that originated in the bowels of the right wing media.

The rebuke of Trump's allegation has been so resounding that even his fellow Republicans are now – finally – saying he should apologize to President Obama.

But Trump is unlikely to do so, instead preferring to keep himself sealed in a bubble of supporters who reinforce his conspiracies. And Trump's behavior will make America the butt of more jokes, as our reputation around the world continues to be dragged down with his own approval ratings.