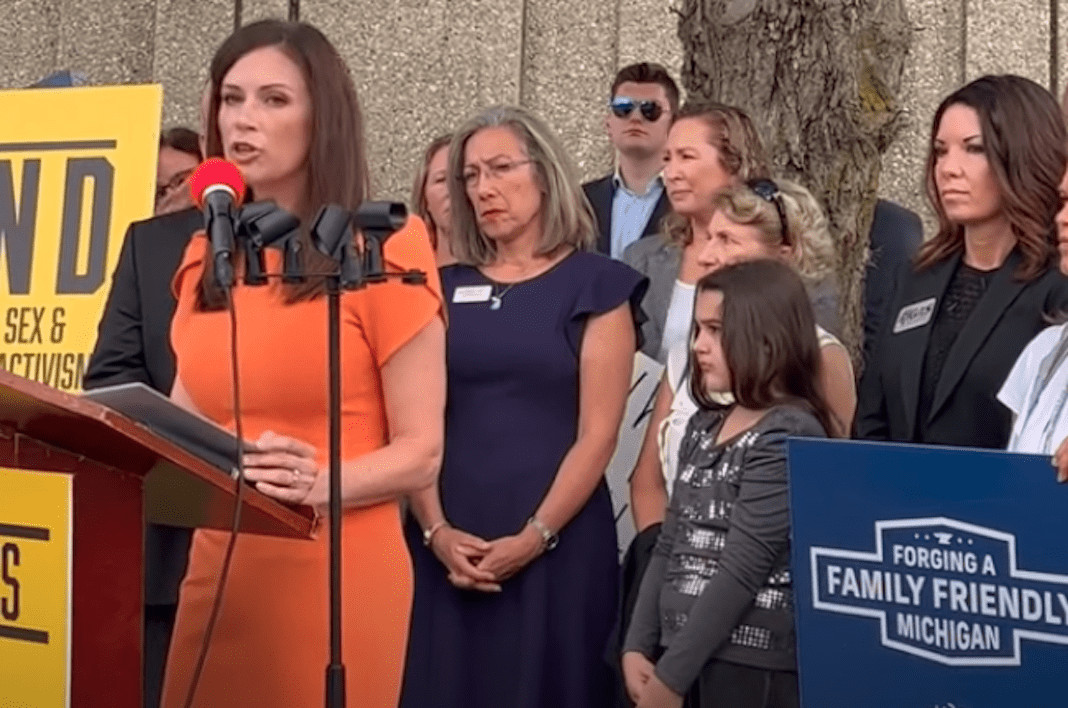 Michigan Republican gubernatorial nominee Tudor Dixon speaks at a press conference in Lansing, Sept. 20, 2022. US Hub/YouTube
Get The American Independent in your inbox

Republican Michigan gubernatorial nominee Tudor Dixon called for the resignation of Michigan's top education official over videos intended to train school staff on how to support LGBTQ students who are struggling.

Michigan Republican gubernatorial nominee Tudor Dixon continued her emphasis on culture war issues in her campaign against incumbent Democratic Gov. Gretchen Whitmer on Sept. 20. During a press conference in Lansing, Tudor called for the resignation of the top executive in the state's Department of Education, saying, "Somewhere along the way, radical political actors decided that our schools are laboratories for their social experiments and our children are their lab rats."

Tudor, backed by a number of women holding signs and agreeing vocally with her statements, said, "Today, I am here first and foremost calling for the resignation of state superintendent Michael Rice." After applause and cheering from her supporters died down, Tudor went on: "And as you can see, there are plenty of parents in the state, many of whom are standing right behind me, who want this same thing. There is no place for radical activism in our schools. Someone who has such contempt for parents as to instruct staff to hide information from them about their struggling child is unfit to oversee our education system."

Tudor remarks at the press conference and in a statement on her campaign website stemmed from an article published by right-wing activist Christopher Rufo on the conservative website City Journal that described training videos provided by the Michigan Department of Education on how best to support and work with LGBTQ students as "a radical gender theory program that promotes gender 'fluidity' beginning in elementary school and encourages teachers to facilitate the sexual transition of minors without parental consent."

The videos offer suggestions for school staff on how to work with children who are struggling. In one example, a trainer points out that teachers  can share with parents that a student is having thoughts of suicide without revealing to them that the student uses pronouns that do not conform to the gender they were assigned at birth, if the student does not want them to: "If you're into that area of, like, you're going to hurt yourself or somebody else, then you have a duty to report. I mean, the law is really clear about that. You can also talk to parents, though, about, like, that your kid is having suicidal thoughts, without outing them, without saying why. You can say, We have some concerns, your child has shared this. I would a thousand percent recommend working with the student to let them guide that process."

Sharing the video, Rufo tweeted, "Finally, the Michigan Department of Education instructs teachers how to facilitate child sexual transitions and recommends that they keep a child's 'chosen name and pronouns' a secret from parents, even if the child is suicidal."

In another video, the trainer discusses the role teacher can play in maintaining and protecting the relationship between students and their families in a situation with parents "who might not be supportive or might not be in a place where they feel ready and able to support their kid." The trainer notes that this can be done while "keeping in mind the safety of the young person involved and recognizing that family is a really important protective factor for young people if the family is not causing harm."

The Department of Education responded in a statement on its website:

For over two decades, the Michigan Department of Education (MDE) has provided local school district-requested professional development to build the capacity of educators to provide safe, supportive, and inclusive school climates where all students can thrive—especially students who identify as LGBTQ+.

Recent allegations that MDE has been holding secret professional development to "teach school employees how to facilitate the sexual transition of children under their care, while keeping the process a secret from parents," are patently false and deliberately divisive. Contrary to these harmful allegations, school staff do not facilitate the sexual transition of children.

School staff listen to children and work to help create inclusive learning environments, and the training informs educators that working with students and their parents is an essential component in this work. Any suggestion to the contrary is an attempt to bully educators and to undermine their support of children and parents.

Rice defended his department in an opinion column published by Bridge Michigan, saying:

Parents are our children's first teachers and schools are committed to strong partnerships with parents. ... Indeed, our professional development explicitly notes the importance of this parent partnership and connection.

At the same time, not all parents are supportive when they discover or are told that their child is gay or transgender. In the professional development sessions, we encourage discussions with parents about these issues whenever possible. ... When parents and students are not on the same page, school staff can play a critical role in helping to bridge the gap.

In a situation in which the student is concerned about abuse, neglect, or homelessness if parents are told, educators may be cautious about sharing issues of sexual orientation and gender identity with parents; they have a responsibility not to put children in harm's way, even inadvertently. Such decisions are not made lightly and are ultimately about safeguarding the health, safety, and wellbeing of students.

In a statement on her campaign website, Dixon said, "What is wrong with these people? Make no secret about it - our own state agency is being weaponized to actively recruit our kids and advance their radical gender theory with zero input from parents."

Dixon has discussed the need for what she calls "transparency" in school curriculums and practices many times, and has suggested that Michigan be more like Florida, referring to Republican Gov. Ron DeSantis' policies on issues of human, civil and LGBTQ rights, in particular his Parental Rights in Education law, otherwise known as "Don’t Say Gay," which bans school discussion of LGBTQ topics from kindergarten through the third grade.

School curriculums are already freely available to parents in Michigan on school or school district websites.

The Whitmer administration responded to Dixon's criticism by asking the department to review its program. In a letter to Rice, Whitmer's chief operating officer, Tricia Foster, wrote: "We urge you to review your trainings to ensure they comply with all applicable regulations, maintain department guidelines, and are reflective of best practices" and noted, “Parents are their children's first and most important teachers."

Dixon trails Whitmer by 16% in a poll of likely voters conducted by EPIC-MRA Sept. 15-19.