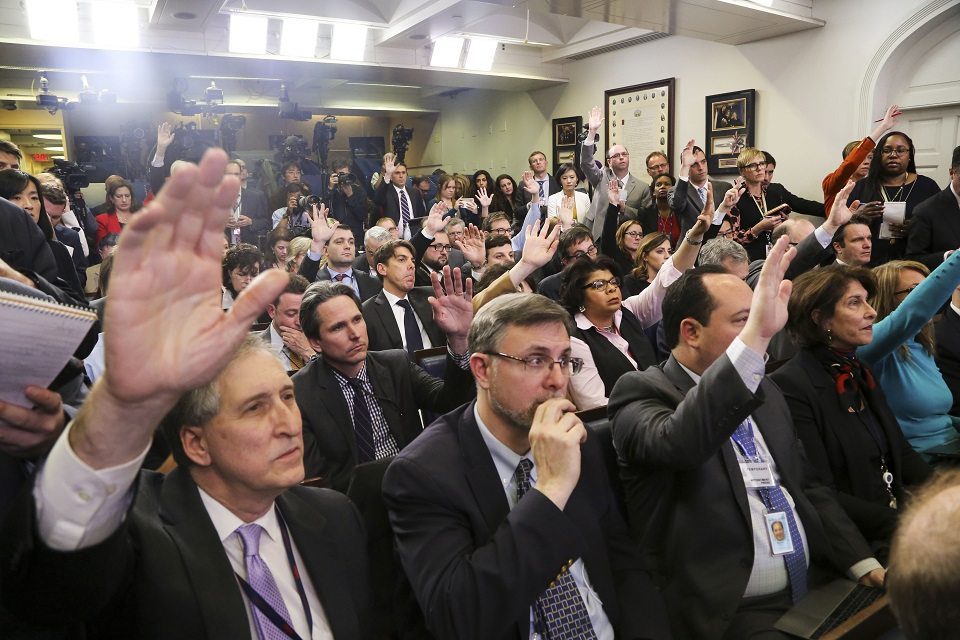 Shareblue has consistently reported on the Republican ignorance about health care that informs their current effort to repeal Obamacare. But as potentially destructive is a similar ignorance among the media, which harmed Americans during their original coverage of the Affordable Care Act. Here are two crucial points that journalists must understand in order to avoid the same disastrous result this time around.

It just recently dawned on Donald Trump that health insurance is complicated, which may explain why the roll-out of the Republicans' Obamacare repeal plan has been greeted with such confusion and opposition. Corporate media coverage of the repeal plan has been intensely negative — and much more positive toward Obamacare than when the Affordable Care Act was actually rolled out.

However, the same fundamental ignorance about health care that caused journalists to fail the public the first time around still exists, and threatens to fail them again.

There are two key points that journalists and reporters frequently miss or ignore these days, and the public desperately needs to understand them.

The first is that "selling insurance across state lines," a popular Republican talking point for many years, actually means gutting all state regulations. It was a key facet of John McCain's 2008 health care plan, and I got the chance to ask him about it a few years later at an event promoting his daughter's book. With minimal prodding, McCain freely admitted that the purpose of the plan was a race to the bottom with state regulations:

CHRISTOPHER: In 2008, one of the features of your health care plan, and one that's still — Republicans are using, is the idea of purchasing insurance across state lines. And so my question has always been: How do you accomplish that without undermining the insurance regulations of the states that those people live in?

MCCAIN: Well, I think that the states have to adjust their regulations, because if someone can get a lower-cost, more comprehensive health insurance policy, they shouldn't be constrained by the state boundaries in which they live. I mean, it's just common sense. If North Dakota has a better health insurance policy that I can get for my wife and children, that's less expensive and more coverage, then I shouldn't be constrained from not purchasing it. And then it would be up to the state of Arizona to adjust theirs.

As a matter of fact, Obamacare already contains a provision that allows insurance sales across state lines, but requires those states to agree on a set of regulations for that coverage. Conservative criticism of that provision makes plain that the real purpose of the Republican plan is lowering costs by gutting state insurance regulations, not increased competition:

Republicans wanted interstate competition for insurance policies, allowing New Yorkers to buy South Dakota policies that have fewer expensive mandates. The bill allows states to form interstate compacts, allowing New York to decide that New Yorkers can buy policies from certain other states—almost certainly other states with similarly stiff regulations. Just as the Harlem Globetrotters always choose to play the hapless Washington Generals, this isn't a real competition: It has the form of a Republican idea, but not the substance. And liberals offer a pretty good reason for not allowing real interstate competition: It might mean that all of the healthiest people in a state will flock to buy barebones policies registered in states with lax regulations, leaving the state government to deal with the oldest and the sickest.

The other problem, of course, is that once these people did get sick, and their meager out-of-state plans did not cover anything, taxpayers would be left on the hook for the cost of their uncompensated care. Beyond the immediate disastrous effects, such a plan would result in either a race to the bottom among states to gut their own regulations, or face actuarial death spirals in those states that refused to go along.

Republicans keep this fact well-concealed, with help from journalists who do not know any better, because it runs counter to their own stated principle that the federal government ought not meddle with the states. That dichotomy was boldly illustrated this week when Health and Human Services Secretary Tom Price told reporters that "states should be able to define what health coverage is," then mere seconds later, proposed just such a massive federal intrusion:

State flexibility — it’s incredibly important that we allow the states to be the ones that are defining what health coverage is, and have the flexibility, especially in the Medicaid program, to be able to respond to their vulnerable population.

State health insurance laws and regulations are not just the whims of bureaucrats — they are the will of the people as expressed by their elected state governments. And the Republican proposal, at its heart, destroys those citizens' voices. Republicans, it seems, only favor "states' rights" when it means removing protections from their residents.

The second crucial point is closely related to the first, because Republicans often speak of "competition" as the solution to every problem. But competition in the health insurance market does not actually work at all: Insurance companies make money by extracting premium dollars from people who do not actually use health care, so every natural market incentive for health insurers is for them not to compete for health care consumers.

That is why, before Obamacare, many people wound up with plans that they discovered would not actually cover anything, and even people with good insurance were subjected to annual maximums and lifetime caps if they got sick, or were  just thrown off of their policies for the crime of needing to use them. That is what "competition" does.

The other grand Republican idea is to control costs by having medical providers post their prices on something akin to a menu board, the idea being that patients can comparison shop for their MRI the way they would for a new iPhone. Aside from the debatable value of such a plan, its obvious flaw is that even the finickiest window shopping would never result in care that would be affordable to the average American facing a serious illness or injury.

That is why we have such an advanced medical system, and why we have an insurance industry at all, because by sharing the costs and risks of health care, we can afford tremendous medical advancements, and attract good people to the medical profession. What needs to be constrained are health care profits. Medicare constrains costs by negotiating on behalf of its 44 million members. Private health insurance companies do the same by negotiating on behalf of their own members, but take a healthy slice of profit for themselves. Forcing insurance companies to compete with Medicare for all, or some other public option, is the only sort of competition that might constrain costs.

The Republican plan to repeal Obamacare is a disaster for many more reasons than these, but if journalists are going to serve the public while covering this debate, these points are a crucial start to ensuring that the next plan to come down the pike is not much worse.