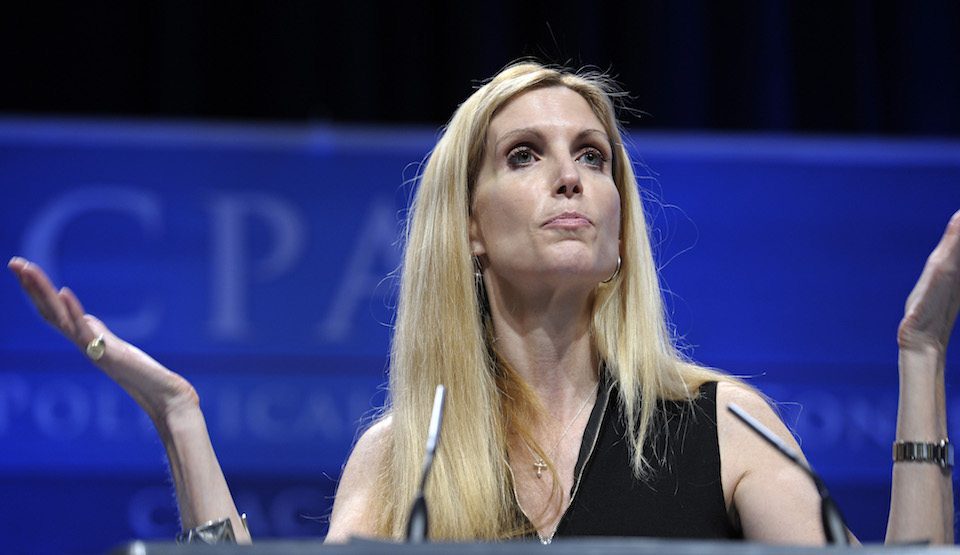 It seems the nation's most prominent racists and white supremacists all had a hand in Donald Trump's campaign platform of hate.

Donald Trump started his presidential campaign with openly racist attacks on Mexicans, calling them "rapists" and "criminals." And his campaign only got worse from there.

Trump hired white nationalist Steve Bannon, the former chief of Breitbart, the the self-described "platform of the alt-right."

Trump, as well as his son and some of his closest advisers, regularly relied on racist and anti-Semitic memes throughout his campaign, sending a deafening dog whistle to America's racists. That's how Trump won the endorsement of the KKK and former KKK wizard David Duke.

Now it turns out that another of the country's most fervent racists, right-wing media personality Ann Coulter, had a hand in helping Trump make his pitch to the most hateful elements of the American electorate.

According to a new book about Trump's campaign, the Trump team hired Coulter "to quickly write a white paper on Trump’s immigration policies," after Trump was criticized for having no policies at all. Coulter then praised the policy paper as "the greatest political document since the Magna Carta," without mentioning that she wrote it.

Coulter, who has built her decades-long career on smearing Democrats and championing white supremacy, was a staunch advocate for Trump during the presidential campaign. As Right Wing Watch notes, Trump's campaign rhetoric mirrored Coulter's hateful book "Adios, America! The Left’s Plan to Turn Our Country into a Third World Hellhole," in which she shamelessly argued that the government should "round up and deport 11 million illegals."

Trump has for years insisted that he is "the least racist person there is." It has always been a demonstrably false and absurd claim.

He has a number of white nationalists on his White House payroll — paid with taxpayers' dollars to the sum of $359,555. One such member of his administration is Sebastian Gorka, a Nazi sympathizer who was on his way out of the White House before Trump and Bannon personally intervened to save his job.

And of course Attorney General Jeff Sessions, who was one of Trump's fiercest surrogates on the campaign trail, has his own long record of racist attacks.

That yet one more nationally recognized advocate for racist policies helped inform Trump's platform, and his presidential agenda, isn't shocking. But it's further evidence of the ugly, divisive, and blatantly racist agenda Trump has had since the very beginning.