Home National Unearthed Trump recording: “I moved on her like a bi*ch ... and...
Support progressive journalism.
Donate today 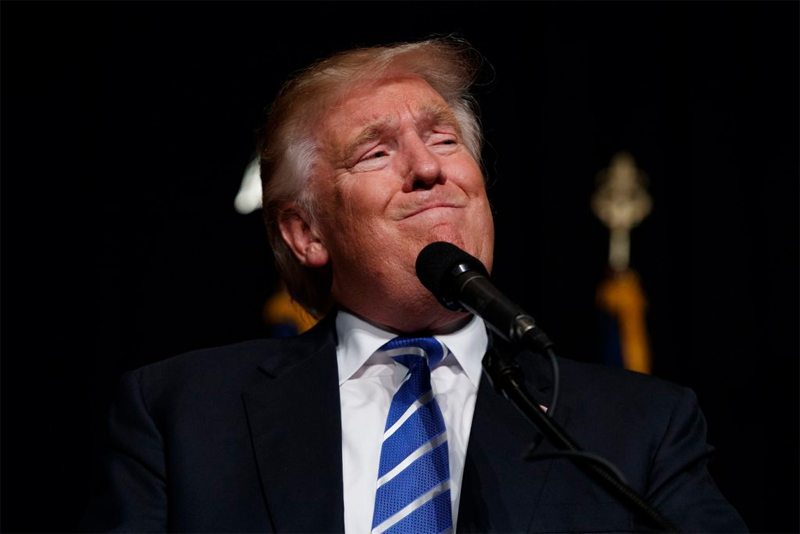 The Washington Post has published a recording from 2005 in which Donald Trump speaks about his exploits with women in the most vulgar terms.

One of Hillary Clinton's most devastating political ads of this election features video of a succession of young women looking into mirrors over audio of Donald Trump insulting women.

In newly-surfaced audio that was leaked from a 2009 Miss USA event, Trump can be heard asking contestants to select other contestants they find "beautiful." He then orders them to line up as he assesses them himself. The overall effect is that of a livestock auction:

Where's Miss Nevada? Come on up here. How are you? Beautiful! You'll be very popular here.

California is beautiful! Go ahead, isn't that nice? You know, when you do this to somebody, you make an eternal friend. It's nice.

New York. She's beautiful, wow. Where do you come from in New York? ... I have a building right next to you. I have buildings all over the place.

Trump is then heard going into a long and very telling explanation of "The Trump Rule":

Years ago, when I first bought [the pageant], we chose ten people. I chose none, and I get here, and the most beautiful people were never chosen! And I went nuts. So we call it 'The Trump Rule.' ... We have judges that maybe know beauty and maybe don't know beauty and they were picking people, and in many cases, they were picking the wrong people! And the most beautiful people were backstage while we were trying to choose a winner.

Contestant and eventual winner Carrie Prejean described a scene very much like this in her book Still Standing, including the effect this sorting process had on the women in the contest:

It became clear that the point of the whole exercise was for him to divide the room between girls he personally found attractive and those he did not.

Many of the girls found this exercise humiliating. Some of the girls were sobbing backstage after he left, devastated to have failed even before the competition really began to impress "The Donald."

Even for a beauty pageant, Trump's behavior was boorish, and these women were all young enough to be his granddaughters.

Another recording unearthed by the Washington Post is even more damning:

Donald Trump bragged in vulgar terms about kissing, groping and trying to have sex with women during a 2005 conversation caught on a hot microphone — saying that “when you’re a star, they let you do it” — according to a video obtained by The Washington Post.

The tape obtained by the Post includes audio of Bush and Trump’s conversation inside the bus, as well as audio and video once they emerge from it to begin shooting the segment.

In that audio, Trump discusses a failed attempt to seduce a woman, whose full name is not given in the video.

“I moved on her and I failed. I’ll admit it,” Trump is heard saying. It was unclear when the events he was describing took place. The tape was recorded several months after he married his third wife, Melania.

“I moved on her like a bi*ch, but I couldn’t get there. And she was married,” Trump says. “Then all of a sudden I see her, she’s now got the big phony tits and everything. She’s totally changed her look.”

Donald Trump apparently thinks he has the right to sexually assault women because he's famous. Nevermind consent, he doesn't think he needs it. He's not a role model, he's vulgar and dangerous, and his disregard for women has never been more clear.

We need Hillary Clinton in the White House.

This tape is both difficult to watch, and also exactly what you would expect from Donald Trump. The tape cuts to the core of who Donald Trump is: someone who judges women based on their appearance and views them as little more than sex objects. Over the course of this campaign, Trump has tried to excuse his sexist, offensive comments as being ‘for the purposes of entertainment.’ Now, he has tried to write this off as ‘locker room banter.’ There is no excuse for this reprehensible behavior. Women will not vote for this man in November.

This is horrific. We cannot allow this man to become president. https://t.co/RwhW7yeFI2