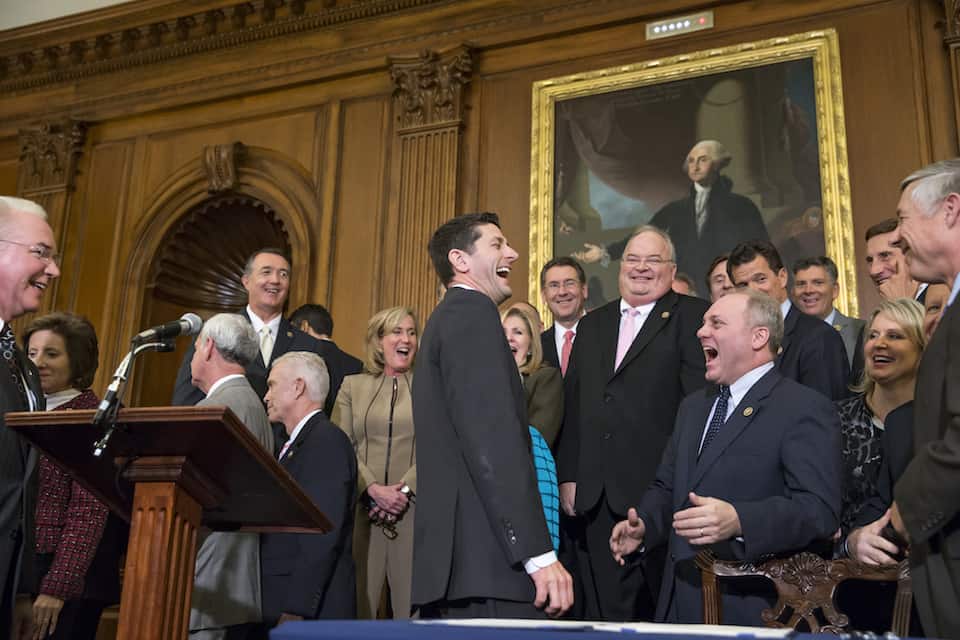 The GOP is shrugging its shoulders at an urgent deadline to renew the most important U.S. law protecting abuse victims.

Not a single Republican in the U.S. House has signed on to renew a major law that helps victims of domestic violence — even though Congress only has 11 legislative days to act before it expires.

The Violence Against Women Act (VAWA), first enacted in 1994, was a groundbreaking piece of legislation that made sure our justice system treats domestic violence like the serious crime it is — not a "private family matter," as many used to believe.

VAWA needs to be reauthorized by Congress every now and then, which Congress has typically done without a fuss and with broad bipartisan support.

That is, it used to — until Republicans raised a stink in 2013 over expanding the law's protections for LGBTQ people, undocumented immigrants, and Native Americans.

VAWA funds crucial services like rape crisis centers, community violence prevention programs, and the National Domestic Violence Hotline. It also offers legal protections against outrages like victims of sexual assault being forced to pay for their own rape kits, or victims of abuse or stalking being evicted from their homes because their attacker caused too many disturbances.

In short, VAWA is a big deal if you care at all about women's health and safety or about protecting abuse victims.

Too bad those issues are an afterthought, at best, for today's Republican Party.

Republicans haven't been publicly complaining too much yet about the new VAWA reauthorization proposal, which was introduced in the House in July by Rep. Sheila Jackson Lee (D-TX).

But GOP representatives also haven't bothered to sign on to it, or even offer their own alternative proposal. There are 104 Democratic co-sponsors for the bill so far, and zero Republicans.

Among other things, the proposal increases funding for local rape prevention efforts; expands the definition of domestic violence to cover "verbal, emotional, economic, or technological" abuse and coercion, not just physical or sexual violence; and gives law enforcement officers more options to take guns away from abusers.

Republicans are starting to grumble about all of these ideas. They argue that it costs too much, or that it might infringe on the rights of abusive gun owners to be abusive and own guns.

To put those complaints in perspective, the proposed $253 million spending increase is the cost of a couple of fighter jets.

Abuse isn't just about rape or beatings; victims often report that psychological abuse or financial coercion are the worst parts of their abuse, and the factor making it hardest to leave their abusers.

And while abuse victims are 5 times more likely to be murdered if there is a gun in the home, the current legal options for taking away an abuser's guns are depressingly narrow.

VAWA expires at the end of September. Congress will only have 11 legislative days to pass it after returning from the August recess. This urgent deadline doesn't seem to bother Republicans one bit.

And why would it?

After all, the Republican president is Trump, the groper-in-chief who was once accused of violently raping his then-wife.

And the Republican attorney general — who leads the Department of Justice, the agency responsible for carrying out many of VAWA's provisions — is Jeff Sessions. He voted against the 2013 VAWA reauthorization, and recently made it a lot harder for victims of brutal violence to seek asylum in the United States.

The Republican Party doesn't care about women's rights or safety, and often works overtime to make life even more dangerous and oppressive for women.

Shrugging their shoulders at the most important law to protect abuse victims is par for the GOP course.