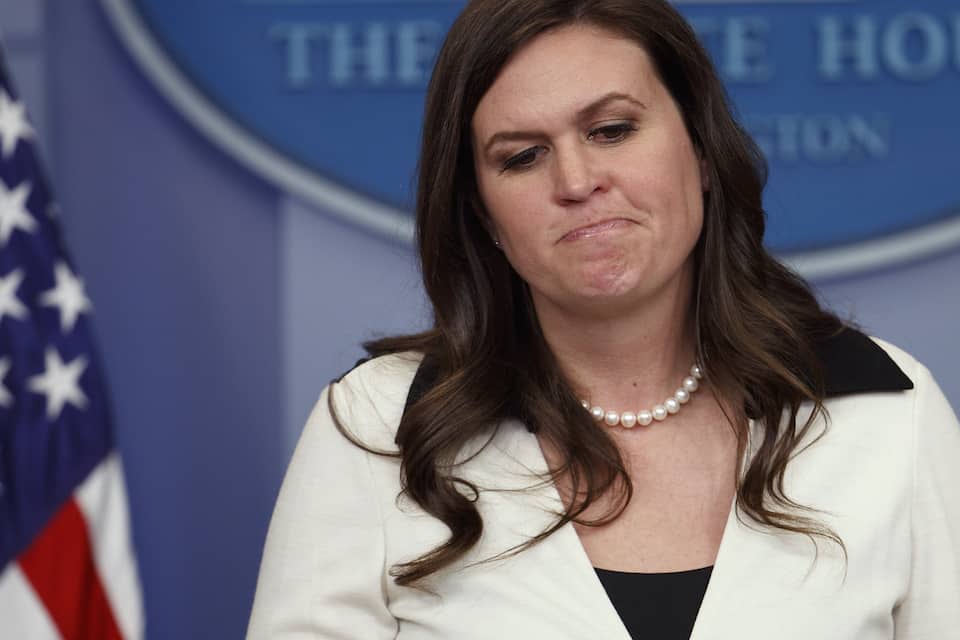 At a White House briefing, ABC News Chief White House Correspondent Jonathan Karl mercilessly called out most of the Donald Trump administration for lying about the decision to fire James Comey, which Trump now says was his alone.

In a recent interview, Donald Trump contradicted his entire communications staff and his vice president by saying that the decision to fire FBI Director James Comey was his alone, and not the result of a recommendation by Deputy Attorney General Rod Rosenstein.

ABC News Chief White House correspondent Jonathan Karl rattled deputy White House press secretary Sarah Huckabee Sanders by reading out her own false statement about the Comey firing, as well as several others, before asking why they had all been so "incorrect."

When Sanders tried to deflect by saying she personally hadn't spoken to Trump when she made that statement, Karl nailed her on it, noting that Vice President Mike Pence has no such excuse:

Sean Spicer said directly it was all him, meaning the deputy attorney general. Now we learn from the president directly that he had already decided to fire James Comey. So why were so many people giving answers that just weren't correct? Were you guys in the dark? Was the vice president misled again?

SANDERS: I know you'd love to report that we were misled and you want to create — hold on, Jonathan, you had — I let you finish, and read off every single one of those statements, so unless you want to trade places, I think it's my turn now.

I think it's pretty simple. I hadn't had a chance to have the conversation directly with the president, to say — I'd had several conversations with him, but I didn't ask that question directly — had you already made that decision. I went off of the information that I had when I answered your question. I've since had the conversation with him, right before I walked on today, and he laid it out very clearly. He'd already made that decision. He'd been thinking about it for months, which I did say yesterday, and have said many times since. And Wednesday, I think, was the final straw that pushed him, and the recommendation that he got from the deputy attorney general just further solidified his decision, and again, I think, reaffirmed that he made the right one.

KARL: This is important. Was the vice president in the dark too?

SANDERS: Nobody was in the dark, Jonathan. You want to create this false narrative.

Sanders went on to try to blame the Democrats and insisted that the White House has been "entirely consistent," but Karl's point was devastating.

The White House has been anything but consistent, as Trump's interview and so many statements from members of his administration have shown.

Trump initially said the decision was made at Rosenstein's recommendation but has since changed his mind. Trump's story about firing Comey was a fiction that never had any credibility. It has now been utterly destroyed by the man who created it. If Trump's presidency comes to a similar end, it will likely be by similar means.