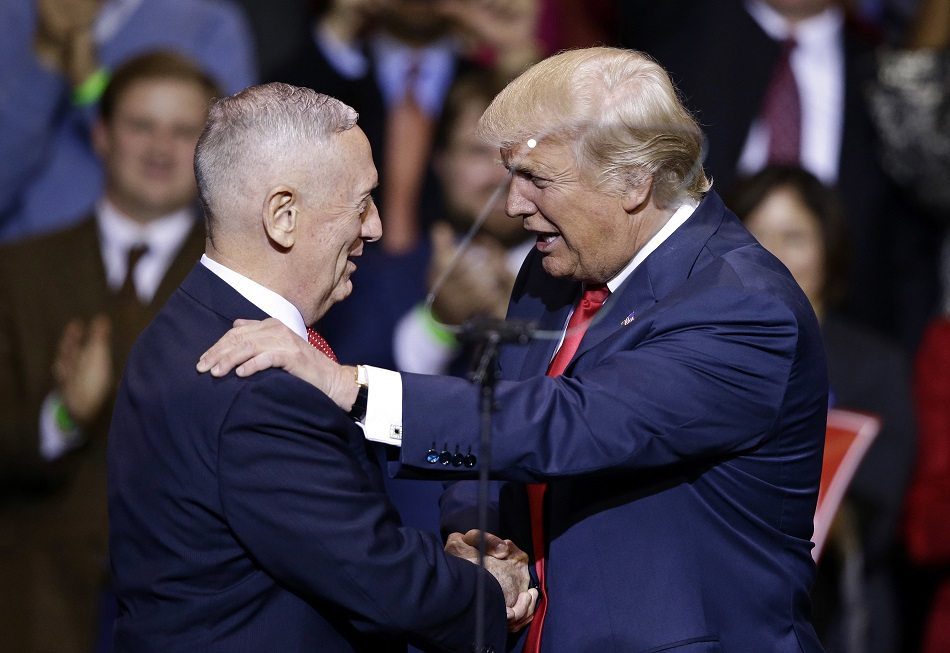 (AP Photo/Gerry Broome, File)
Get The American Independent in your inbox

With Donald Trump's recent selection of retired General James "Mad Dog" Mattis as Secretary of Defense and retired General John Kelly to head the Department of Homeland Security, VoteVets.org, a veterans' organization of over 450,000 members, is issuing an urgent warning about upending civilian leadership traditions, which are written into our Constitution for good reason.

Retired General James Mattis was recently introduced at one of President-elect Donald Trump's "thank you" rallies as his choice for Secretary of Defense, a selection that has drawn decidedly mixed reviews.

Mattis, who has an unsettling history of violent quotes, will need a waiver in order to assume the position thanks to a law that mandates a 7-year gap between active military service and the top post at the Defense Department. Republicans in Congress are in the process of trying to ram through a waiver in a government funding bill.

General Mattis is a serious choice for Secretary of Defense, but raises two issues.

First, and foremost, as someone who has stood diametrically opposed to Donald Trump on issues like Iran and NATO, will he stand up to Trump and build a coalition of voices in the administration to challenge Trump when he is wrong? In a great many cases, the last bulwark against Donald Trump making catastrophic decisions will be General Mattis. Will he face down Donald Trump, or will he resign, in those situations?

Secondly, while absolutely qualified, and loved by men and women who serve, we traditionally have had civilian leadership of the Pentagon for a good reason. We have no doubt that General Mattis will respect that traditional role. However, it is somewhat concerning that Donald Trump continues to eye recently retired Generals for some of the most important traditionally civilian positions in government. People with military experience bring a lot to the table, and we need more of them in government. However, we should never lose sight of the balance in civilian and military roles that has served our nation well for centuries.

The absolutely crucial balance to which Soltz refers is codified throughout the U.S. Constitution in the separation of powers, and is meant to prevent any number of ills that our founders foresaw, including military dictatorship. As this article on the Defense Department's website explains in chilling detail, this is no mere abstraction. "[B]efore the concept of civilian control of the military sank in," it reads, "some military officers actively plotted against the government."

That balance is being further tested by Trump's selection of retired Marine General John Kelly as Secretary of Homeland Security, which has engendered worry about the militarization of a sprawling civilian security bureaucracy.

In a separate statement to Shareblue, Soltz expressed his concerns about Kelly:

General Kelly obviously has a great military record, but does bring some concerns to the table, as the head of DHS.

First and foremost, his steadfast support for the prison at Guantanamo Bay will continue to help terrorists recruit, make us less safe, and his apparent support for the torture that took place there stands in stark contrast to the views of General Mattis that torture does not work.

Secondly, heading DHS requires skill and experience dealing with a complex interagency process, not just strategic thinking. Dealing with a myriad of agencies, contracts, unions, and more is just not something General Kelly has ever really done. It is not a natural job for a general, and there is no time for him to learn on the job. He must convince the Senate that he will need no training on the job.

One final point. As someone whose son gave his life in service, General Kelly knows the pain of being a Gold Star parent. We are very interested in knowing if General Kelly will make it a point to convince Donald Trump to apologize to the Khans, and other Gold Star families who were deeply hurt by Trump's comments. It is one of the greatest things Kelly could do, to bring America together.

Kelly retired in January, but will now be in a position to head a set of agencies operating domestically, the militization of which has already been criticized.

Just as the framers sought to keep the military under civilian control, they sought to keep the government out of military control. As Soltz points out, even the most respected military mind is not necessarily suited to the responsibilities of governing. More than that, though, the Department of Homeland Security is already an unwieldy behemoth. Placing it under control of a recently-retired general risks further militarizing it, making it a dangerous behemoth as well.

Pending Senate confirmation, Donald Trump would have most generals in his Cabinet since World War II https://t.co/eg5p5If2Rt pic.twitter.com/5CuUsgHNrV

In addition to Mattis and Kelly, Trump has appointed controversial retired General Michael Flynn to be national security adviser, and is reportedly considering retired General David Petraeus for Secretary of State.

Democrats will face a real challenge when deciding which of Trump's nominees to oppose, when so many of them present major cause for concern. But civilian control of the military is a principle worth fighting for, and civilian control of our government is even more so.