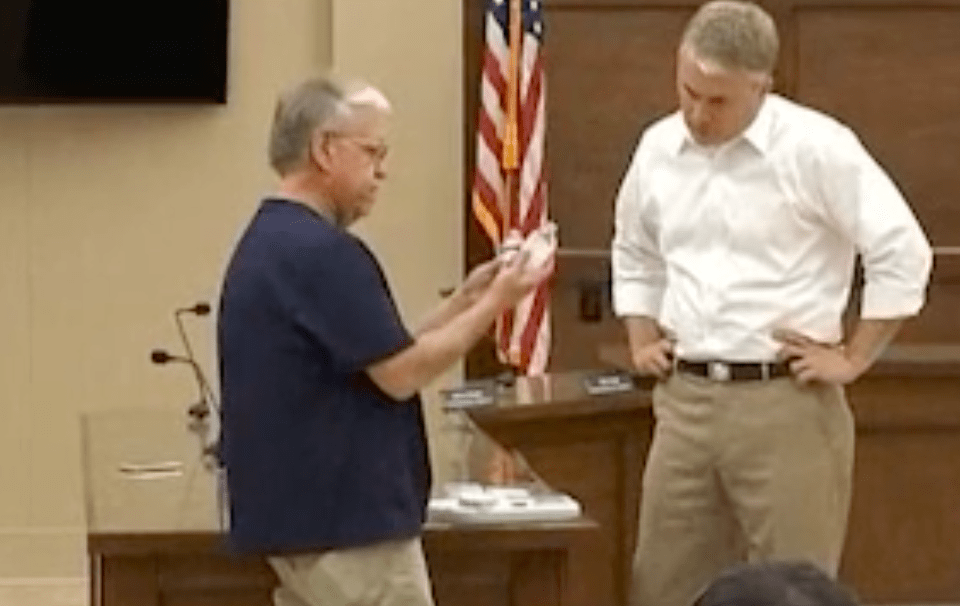 WPSD
Get The American Independent in your inbox

Republican Rep. James Comer (R-KY) got a vivid demonstration of the Republican health care repeal plan's consequences when a constituent showed him the costly lifesaving treatment that Obamacare allows him to afford.

With the monumental distraction of Donald Trump's bombshell-a-day FBI obstruction scandal, it is easy to lose focus on the life-or-death struggle by many Americans against the Republican attack on health care.

Kentucky Republican Rep. James Comer found that out during a town hall meeting in Marshall County recently, when a constituent actually showed him, and the entire town hall, what Obamacare's repeal could mean to him. In a dramatic exchange, Randy Gray showed Comer the medical treatment that keeps him alive, at a cost of $680,000 per year.

Showing Comer two vials of medicine and the pump he uses to deliver them, Gray told him that "these two bottles right here represent $13,000 a week worth of my medicine." It's just part of the regimen that Gray needs in order to treat the life-threatening immune system disorder with which he was diagnosed in 1963.

Without Obamacare, Gray explained, he would quickly exceed the annual and lifetime caps that existed before the Affordable Care Act became law.

Gray concluded by telling Comer not to forget about him when he gets back to Washington, or when it's time to cast votes in Congress.

"I want you to think about people like me," Gray said. "I didn’t ask for this. Believe you me, I’d rather be like you and be perfectly healthy."

Gray is the son of retired Democratic Kentucky state Rep. J.R. Gray, who was also at the town hall, and who had strong words of his own for Comer, and for Donald Trump.

But it was his son's dramatic plea that had the most impact, as a powerful reminder that illness and death don't take time off for scandals and résumé-fluffing foreign trips.

Amid all the distractions, the Congressional Budget Office is set to come out with a new report on the repeal plan this week. We must not forget the real people, like Randy Gray, who will be represented in the millions when that report comes out, whose lives hang in the balance, and for whom this assault on health care must be resisted.