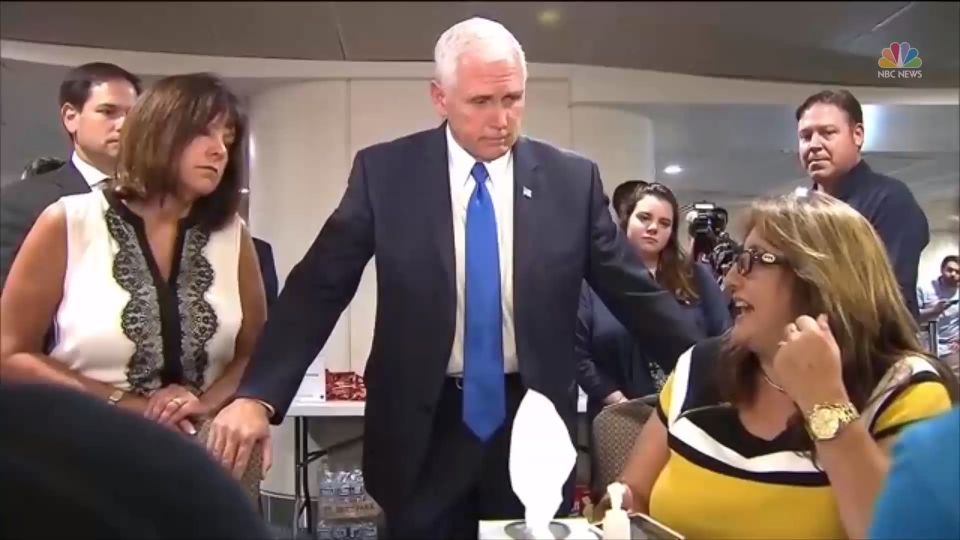 A Puerto Rican woman confronted Mike Pence during a hurricane relief photo op, pointing out that Donald Trump had avoided the areas of severe and serious devastation during his brief trip to the island.

A Trump administration photo op went horribly off the rails when a Puerto Rican citizen confronted Mike Pence about Donald Trump's bizarre trip to the island in the wake of the hurricane.

Pence traveled to Orlando International Airport and greeted a group of people who had just arrived from the island. They were meeting with relief agencies assisting them when Pence spoke to Everlinda Burgos, from Naranjito, located in central Puerto Rico. Naranjito, like most of the island, is suffering from a lack of water and other essential supplies.

While he was probably expecting a soft-focus, camera-friendly meeting, Burgos quickly took Pence to task.

Speaking of his planned visit to the island, Burgos said, "Don’t go to San Juan. Go inside the country, like where I live." She pointed out that Trump had visited "another part, not in the center" during his quick trip there, and had avoided the areas with major devastation.

Burgos also made a point of highlighting that the death toll in Puerto Rico is worse than what Trump tried to claim it was, noting that communication has been cut off many areas so "they don't know" how many were killed. During his trip, Trump insisted that the death toll was very low, and that that was also evidence of how well his team had performed. Since then the Trump team has been caught erasing data about the response that makes his administration look bad.

Pence's bizarre response was to tell her "there's no place like home," and awkwardly hug her. Notably, he did not offer an apology or explanation for Trump's widely criticized trip.

BURGOS: 34 today. Right now, that's what they say outside.

BURGOS: Right now, I know the president went, but he we went some – another part, not in the center. I would like you to go to the center.

BURGOS: Because that's where the disaster is.

PENCE: Well, we're going to work every part of it. We're going to help Puerto Rico recover, and you'll be here. You'll be fine, your son, your family, and then you'll be able to go home, right?

BURGOS: I hope so.

PENCE: That's right. Can I give you a hug?

Trump spent just a few hours in Puerto Rico, whose citizens he had slammed for not doing more to make him look good before he arrived there.

Once on the ground, Trump led an event in which government officials were prompted by him to say what a good job his administration has done in response to the storm. He snubbed the San Juan mayor who has been critical of his slow response, then he threw out paper towels and turned his nose up at efforts to reclaim drinking water.

He then left an hour before he was scheduled to go and added the Puerto Rican flood response to the long list of squandered and mismanaged events in his presidency.

Pence has often acted as the clean-up act for Trump's inability to lead. But in this instance, the job is too big for him to handle, and one Puerto Rican woman made that clear — right to his face.