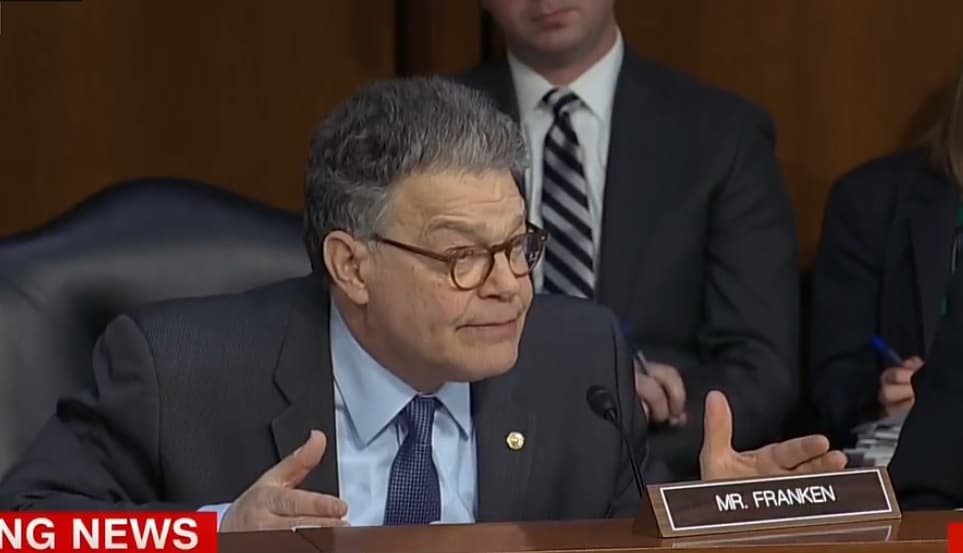 Senator Al Franken brought up the tortured logic used by Trump's Supreme Court nominee Judge Neil Gorsuch to justify a ruling in which his preferred outcome would have justified a man dying of hypothermia. Franken blasted the ruling as "absurd" and explained why it made him question Gorsuch's judgement.

Senator Al Franken (D-MN) grilled Trump Supreme Court nominee Judge Neil Gorsuch on his controversial decision against a truck driver who was fired by his employer for abandoning his vehicle after waiting for repairs after several hours in subzero temperatures.

The Tenth Circuit court ruled that Alphonse Maddin had been illegally fired from his job and ordered that he be rehired, but Gorsuch dissented and argued that the company was within its rights to get rid of the employee, even if he had been mistreated.

In his opinion, Gorsuch had written that the statute was "perfectly plain." During Gorsuch's confirmation hearing, Senator Franken took issue with this characterization, pointing out that using the concept of the "plain meaning rule," judges have a duty to avoid a result that would be "absurd" particularly when the outcome could have been freezing to death.

Franken made it clear that Gorsuch's rigidity – which would have found nothing wrong with a man dying – made him "question [Gorsuch's] judgement."

FRANKEN: You decided that they had the right to fire him even though this law says you may not discharge an employee who refuses to operate a vehicle because he did operate the vehicle. Is that right? That's your -- that's how you decided, right?

GORSUCH: That's the gist of it.

GORSUCH: Senator, there are a lot more words and opinions both in the majority by my colleagues and in dissent. But I'm happy to agree with you, that's the gist of it.

FRANKEN: Right. Well that's what you've said. And, look, I'm not a lawyer, but I've been on this committee for about 8 years, and I've paid some attention. So I know that what you're talking about here is the plain meaning rule. Here is what the rule means: When the plain meaning of a statute is clear on its face, when its meaning is obvious, courts have no business looking beyond the meaning to the statute's purpose. And that's what you used, right?

GORSUCH: That's what was argued to us by both sides, Senator.

FRANKEN: But that's what you – what you used.

GORSUCH: Yep. Both sides argued that the plain meaning supported their --

FRANKEN: And you used it to come to your conclusion?

GORSUCH: Both sides did.

FRANKEN: But the plain meaning rule has an exception. When using the plain meaning rule would create an absurd result, courts should depart from the plain meaning. It is absurd to say this company is in its rights to fire him because he made the choice of possibly dying from freezing to death or causing other people to die possibly by driving an unsafe vehicle. That's absurd. Now, I had a career in identifying absurdity, and I know it when I see it. And it makes me -- you know, it makes me question your judgment.

Red flags have previously been raised about Gorsuch's outlier opinion in this case, which is another piece of evidence showing the nominee's hostility towards worker safety, and become a rallying cry for those opposed to his nomination and the manner in which it would pervert the orientation of the court, against workers and the average American, and in favor of businesses and the powerful elite.