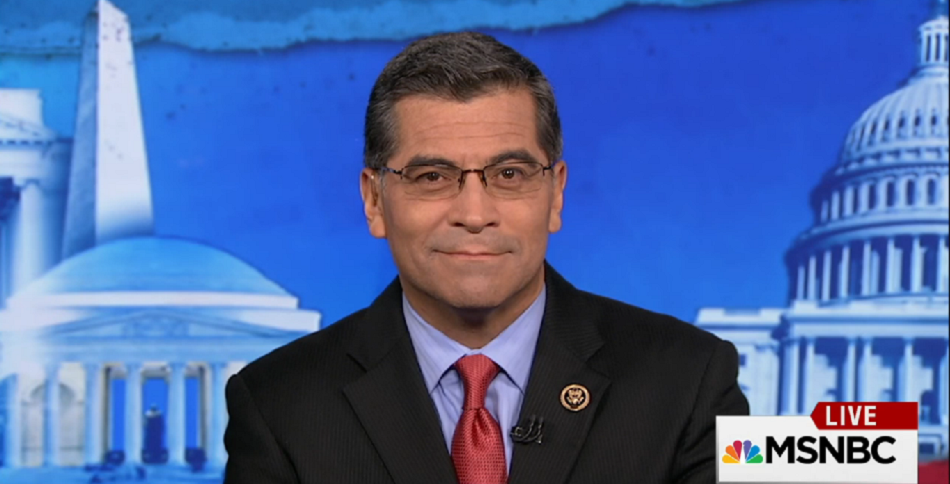 With its large and diverse population, and a robust economy, California has a great deal of power and influence in politics and society. The state's incoming Attorney General Xavier Becerra is proud of that fact, and intends to leverage it against the Trump administration's overreaches.

California is the most populous state in the nation, and the 6th largest economy in the world. It is also often a bellwether and driver of social change nationwide.

On her show Wednesday night, Rachel Maddow noted how this "definitely blue" state "has been a real laboratory of progressive social policy for a while, no matter who is in charge 2,500 miles away in Washington, D.C."

And it is in this spirit of "As goes California, so goes the nation," that Democratic Representative Xavier Becerra has signaled his intention to be at the forefront of looming confrontations between this very blue state and the incoming right-wing, reactionary Donald Trump administration.

Recently nominated by Governor Jerry Brown as the state's next Attorney General, in succession to Senator-elect Kamala Harris, Becerra knows that California could be a target for a federal government that is actively opposed to the state's overarching goals and values. Lawmakers in the state will need to be its staunch defenders.

And as he told Maddow, Becerra is ready and willing to take on that role.

MADDOW: Does it strike you wrong, do you object at all to this idea that California might have a role vis-a-vis the Trump administration, something akin to what Texas has done to the Obama administration?

BECERRA: We'll have a role, because we're California, and more often than not, as goes California, so goes the nation. But I will say this: I don't think California is looking to pick a fight — we're just ready to fight if someone tries to stop us from moving forward some progressive values that have helped so many Californians. Nearly 39 million people strong, we are a growing economy, the 6th economic power in the world, and we're not going to stop and we're not interested in having folks try to stop us. We'll look at the Constitution of the United States and we'll look at our California Constitution, and recognize that, as any other state, we will do whatever the U.S. Constitution allows us to do to protect our people and advance our interests.

MADDOW: One of the flashpoints already is clearly going to be the issue of immigration. This week, Democratic leaders in your state announced a bill that would ban state and local law enforcement from helping the federal government round up undocumented immigrants. Another bill would require President Trump to get approval from California voters before building a wall along the Mexican border with California. If things like this get passed, if they get signed by the governor, if they become California law, do you expect that you'll be defending these things in court?

BECERRA: I would hope that the federal government would recognize that states have the purview to take on the protection of their people, the advancement of their economy. So long as we're not doing something that's against the U.S. Constitution, we should have the right to move forward. And if we don't want to see walls built along our southern border, we will do everything we can to make sure that our people understand that we have a good working relationship with Mexico, we have a lot of folks who go back and forth, I'm the son of Mexican immigrants. And so we recognize — about 40 years ago, we went through this fight that so many people in this country are going through on immigration. We've gone way beyond that. I remember Pete Wilson and Prop 187 in 1994. At that point, we were probably considered a purple state, maybe even in some minds a red state. Today we're a very blue state, and much of that is because of Prop 187 and Pete Wilson.

It is heartening to know that leading lawmakers in an influential, powerful state like California are eager to take up the defense of progressive values. As Becerra proudly put it, "If you want to take on a forward-leaning state that is prepared to defend its rights and interests, then come at us."