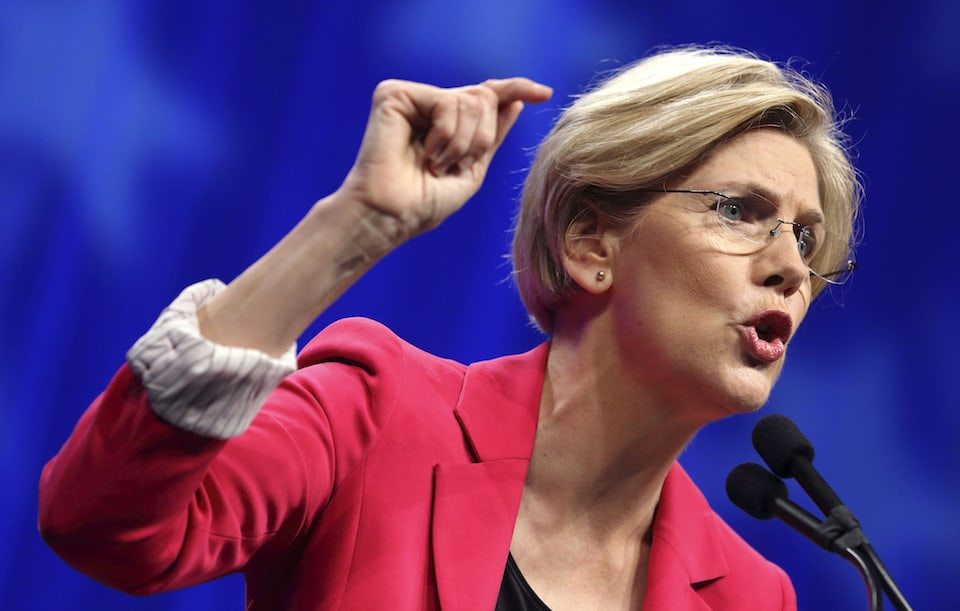 (AP Photo/Michael Dwyer, File)
Get The American Independent in your inbox

Massachusetts Democrat and progressive hero Senator Elizabeth Warren delivered a flawless argument to her Senate colleagues for why Judge Neil Gorsuch, Donald Trump's nomination for the stolen Supreme Court seat, is an unacceptable choice and should not be confirmed. And, as usual, she is completely right.

Senate Republicans are determined to steal the vacant Supreme Court and give it to Judge Neil Gorsuch — whose anti-woman record and remarks, even during his confirmation process,  is deeply troubling — but Democrats are united in making sure they will not get their way without a fight.

That is why Senator Mazie K. Hirono (D-HI) organized her fellow Democratic women senators to give a series of speeches highlighting what makes Gorusch unacceptable, especially for women and their families.

Donald Trump's nomination of any judge for this seat is arguably illegitimate, given the unprecedented and outrageous scheme the GOP deployed to prevent President Obama from fulfilling his constitutional duty to fill the vacant seat.

But this particular nominee, at this particular moment in Trump's presidency, is especially troubling, and Democrats are right to do everything in their power, including filibustering, to stop him — as Senator Elizabeth Warren (D-MA) so perfectly explained in a speech on the Senate floor:

Thank you, Mr. President. Thank you to the senator from Hawaii for calling us here together today.

Now, I'll be honest. I think it is crazy that we are considering confirming a lifetime Trump nominee to the Supreme Court at a moment when the president's campaign is under the cloud of an active, ongoing FBI counterintelligence investigation that could result in indictments and appeals that will go all the way to the Supreme Court so that Trump's nominee could be the deciding vote on whether Trump or his supporters broke the law and will be held accountable. That is nuts, and I believe we should tap the brakes on any nominee until this investigation is concluded.

Warren is right, and that should be reason enough to prevent the Senate from confirming any Trump nominee to a lifetime appointment. But Warren continues, listing specific objections to Gorsuch in particular, including the fact that he was hand-picked by right-wing groups because they believe he would be their ally on the Court:

But even if none of that were happening, I would still oppose the confirmation of Neil Gorsuch. My objection is based on Judge Gorsuch’s record, which I have reviewed in detail. Judge Gorsuch's nomination is the latest step in a long political campaign by right-wing groups and their billionaire backers to capture our courts. Of the last 30 years, as the rich have gotten richer and working families have struggled to make ends meet, the scales of justice have been weighted further and further in favor of the wealthy and the powerful.

Giant corporations and right-wing groups have notched a lot of big wins in the Supreme Court lately, but they know that their luck depends on two things. First, stacking the courts with their allies and second, stopping the confirmation of judges that don't sufficiently cater to their interests. That's part of the reason that they’ve launched an all-out attack on fair-minded mainstream judges — judges like Merrick Garland, a thoughtful, intelligent, fair judge to fill the open vacancy on the Supreme Court. These very same corporate and right-wing groups handed Donald Trump a list of acceptable people to fill the Supreme Court vacancy. And as a presidential candidate, he promised to pick a justice from their list.

Who made it on to the right-wing list? People who, unlike Judge Garland, displayed a sufficient allegiance to their corporate and right-wing interests. Judge Gorsuch was on that list, and his nomination is their reward.

Even before he became a federal judge, Judge Gorsuch fully embraced right-wing, pro-corporate views. He argued that it should be harder, not easier, for shareholders who got cheated to bring fraud cases in court. And on the bench, Judge Gorsuch's extreme views meant giant corporations could run over their workers.

Now, when it comes to the rules that prevent giant corporations from polluting our air and our water, from poisoning our food, from cheating hard-working families, Judge Gorsuch believes that it should be easier, not harder, easier for judges to overturn those rules, a view that is even more extreme than that of the late Justice Scalia.

Republicans assert that Judge Gorsuch is a fair mainstream judge, but right-wing groups and their wealthy anonymous funders picked him for one reason: because they know that he will be their ally. And that's not how our court system is supposed to work.

Judges should be neutral arbiters dispensing equal justice under law. They should not be people hand-picked by wealthy insiders and giant corporations. For the working families struggling to make ends meet, for people desperately in need of health care, for everyone fighting for their right to vote, for disabled students fighting for access to a quality education, for anyone who cares about our justice system, there is only one question that should guide us in evaluating a nominee to sit on any court: whether that person will defend equal justice for every single one of us.

Judge Gorsuch's record answers that question with a loud no.

Republicans have a choice. They can tell President Trump to send a new nominee, a mainstream nominee who can earn broad support. Or they can jam through this nominee. If they do jam through Judge Gorsuch, the Republicans will own the Gorsuch court and every extreme 5-4 decision that comes out of it. Republicans will own every attack on a woman's right to choose, on voting rights, on LGBTQ rights, on secret spending in our political system, and on freedom of speech religion. Republicans will be responsible for every 5-4 decision that throws millions of Americans under the bus in order to favor the powerful moneyed few who helped put Judge Gorsuch on the bench.

If ever there were a time to say that our courts should not be handed over to the highest bidder, it is now. And that is why Judge Gorsuch should not be confirmed to sit on the Supreme Court of the United States.

Thank you, Mr. President. I yield.