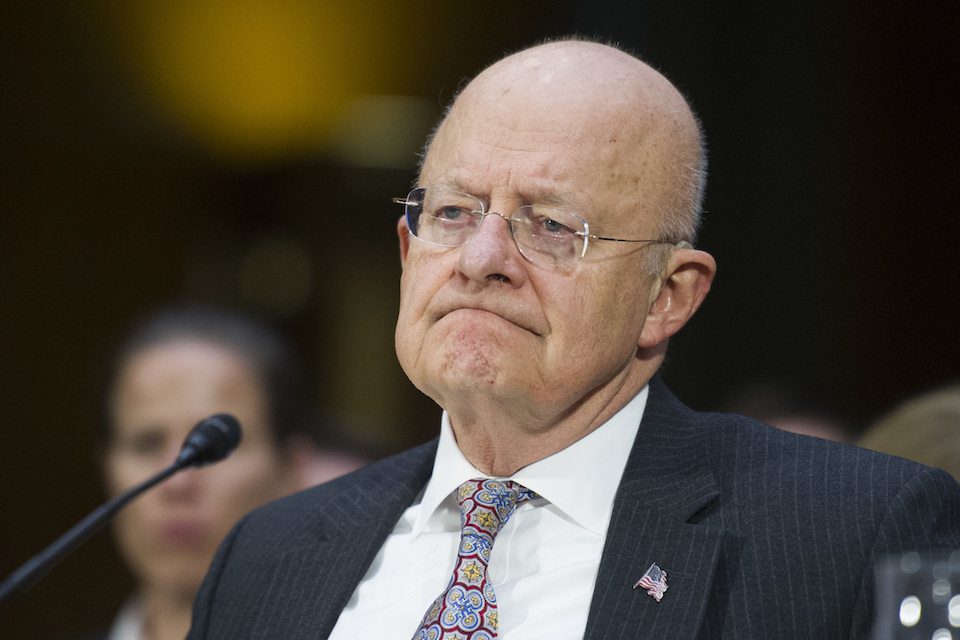 Former Director of National Intelligence, James Clapper, confirmed some claims within the Trump/Russia kompromat dossier and refused to refute others.

During an interview on Monday with ABC's Brian Ross, former Director of National Intelligence, James Clapper spoke at length about his conversation with Donald Trump following the briefing of Trump by FBI Director James Comey on the contents of the supplemental material in conjunction with Trump's January brief on the Intelligence Community Assessment "Assessing Russian Activities and Intentions in Recent US Elections." The supplemental material was a two-page summary of what was later revealed to be a 35 page collection of memoranda compiled by a British former counter-intelligence officer with expertise in Russian affairs. The larger dossier came to be known as the "Steele dossier" or the "Trump kompromat dossier" and contains information about alleged communications between Trump aides and advisors and representatives of the Russian government during the presidential campaign and other material that might be used by Russia to coerce Trump into serving their interests.

While there has been skepticism from some about the dossier's contents and the Trump team has attempted to dismiss the dossier as "fake news," we reported earlier that central allegations within it - and even the details of specific meetings - have proven over time to be factual.

In his interview with ABC, Clapper confirmed aspects of the dossier and - notably - declined to refute any of the dossier's contents. In addition, Clapper revealed Trump had asked him to put out a public rebuttal of the dossier, which Clapper refused to do. Watch this portion of the interaction between Ross and Clapper:

Ross: What did he [Trump] say about this dossier?

Clapper: Well, this [the briefing of Trump on the supplemental material] was on a one-on-one basis by Director Comey. We had decided that was the best way to handle it. And I assume he took - subsequent conversation I had with him – he took umbrage at it and thought it was all false.

Ross: What did you say to him about his speech that compared the intelligence community to Nazis?

Clapper: I tried to appeal to his higher instincts and make the point to him about what a tremendous resource, a tremendous treasure actually, a national treasure, the U.S. intelligence community is. The institutional instincts of the community are to support policy makers, particularly policy maker number one. And, in that, carries a responsibility, which I hope he would understand and accept – in fact welcome – truth to power, even though this may be bad news or information he doesn’t want to hear.

Ross: And what did he say when you raised this issue?

Clapper: Well, he seemed to accept it, but his main concern, in fact he asked me, to put out a rebuttal or a refutation of the dossier, which I couldn’t do and didn’t do.

Clapper: I had no way of validating – at the time, no way of corroborating the information in it. Some of the second and third order sources that were used in that, we could not corroborate. And I told him that.

Ross: Are there parts of that dossier that have been corroborated?

Clapper: There were some. Particularly pertaining to the rabid animus, I guess I’d call it, that Putin had for the Clintons, both President Clinton and Secretary Clinton. And that was born out in the main body of the report, but we felt, because of the unknowns pertaining to the sources of this report, that we did not include it in the main body of the report that we briefed him.

Ross: But, just so I’m clear, there are some parts of that dossier that have been corroborated?

Clapper: The, as I said, the example I cite is the animus for the Clintons, and that we saw from other sources.

Ross: Are there other parts that have NOT been corroborated?

Clapper: That’s all I’m going to comment on the dossier.

When asked if there are parts of the controversial dossier that have not been corroborated, it would have been simple enough for Clapper to say, "Yes." He chose not to do so. For a man with decades of experience in a field where what one doesn't say is as known to be as significant as what one does say, that's a notable and possibly meaningful choice on his part.

Clapper's decision to decline to refute any portion of the dossier and to reveal Trump had asked him to put out a public rebuttal of it are also notable in terms of timing. Since Trump's inauguration, his former National Security Advisor Michael Flynn was forced to resign and his Attorney General Jeff Sessions recused himself under pressure from any investigation of Russian interference with the Trump campaign. Both of these events came about as a result of  their each lying about their respective communications with Russian officials. As a result, Democrats have recently stepped up demands for a special prosecutor independent of the Department of Justice to investigate Trump's ties to Russia.