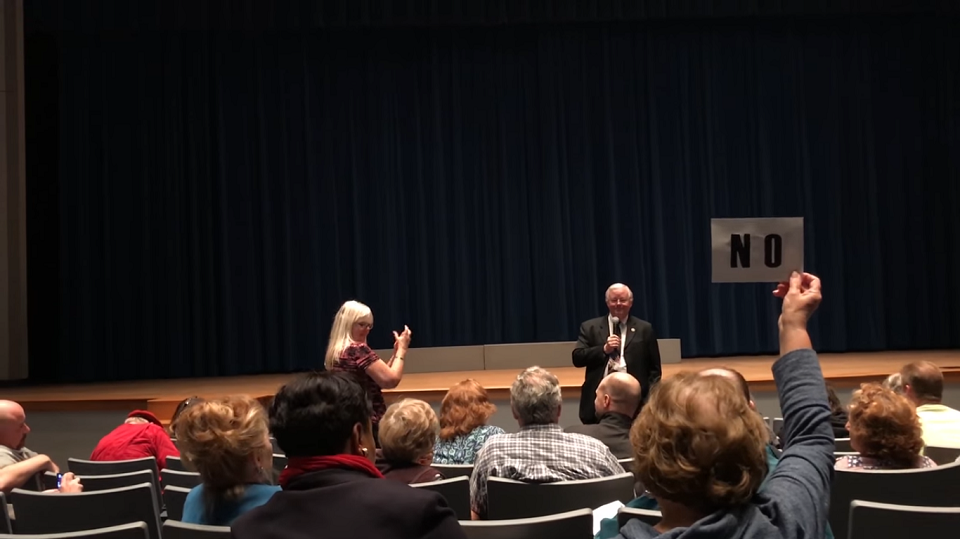 YouTube/bryanstew
Get The American Independent in your inbox

In response to being called out by angry constituents during a town hall meeting, Rep. Joe Barton (R-TX) yelled at one of them to "shut up."

Rep. Joe Barton (R-TX) lost his cool during a town hall meeting in Frost, TX, yelling at a constituent to "Shut up!"

Barton's outburst came after a voter challenged Barton for opposing legislation pertaining to violence against women. Asked why he voted against a bill regarding such crimes, Barton claimed that it was a state issue, not a federal one.

In response, several members of the audience booed him, and one man said, "It's violence against women, that's a national issue. That is an issue that impacts everyone everywhere, not only in this country but everywhere."

That was the pushback that made Barton blow his top.

AUDIENCE MEMBER: Now given your voting record opposing legislation protecting women from violence, will you make a commitment to us today, make a promise, that you will reach out to Congresswoman Jackie Speier and work with her to see this bill successfully through Congress?

BARTON: Let me comment on a number of things that you're – on the first bill that I voted against, that's a true statement, and I voted against it because I think that's a state issue not a federal issue, there are –

AUDIENCE MEMBER: It's violence against women, that's a national issue. That is an issue that impacts everyone everywhere, not only in this country but everywhere.

BARTON: You, you sir shut up.

AUDIENCE MEMBER: [jeers] You don't tell anybody to shut up, you work for us.

Conservatives have often used the excuse that an issue is to be left to the states to excuse inaction at the federal level. Most infamously, segregation and voting rights were described as "state's rights" issues, which helped to prolong the systemic racism that flourished in the Jim Crow south until federal legislation was finally passed in 1964.

The Dallas Morning News reported that Barton had additional town hall problems, as more people showed up for an earlier town hall than he expected and his team was forced to "change the location of the town hall from a small room in a senior center to a school gymnasium."

Republicans have faced a grassroots uprising confronting them at town hall meetings since the year began. Progressives, organizing against Trump and the Republican Congress, have made life miserable for members of Congress, who have begun canceling town hall events, holding them over the phone, or running away from them when the situation got too uncomfortable.

And Barton's unprofessional reaction shows that the pressure is getting to Republicans, and is a sign to those in The Resistance that their methods are working and should endure.