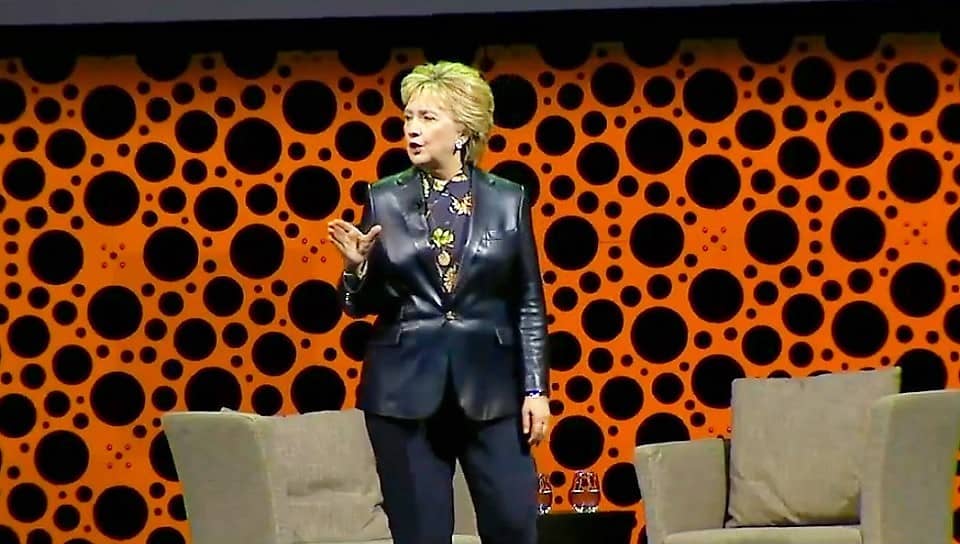 screenshot via YouTube
Get The American Independent in your inbox

Hillary Clinton delivered an uplifting, inspirational speech at the Professional Business Women of California Conference in which she praised the resistance that killed Republicans' attempt to repeal Obamacare, and encouraged that fight to continue.

Hillary Clinton is getting a lot of attention for her strong condemnation of racist and sexist attacks on Rep. Maxine Waters (D-CA) and White House correspondent April Ryan, but the rest of her speech was filled with strength and inspiration, as well.

Addressing the Professional Business Women of California Conference, Hillary channeled the energy and defiance of her supporters, praising the resistance and pointing the way forward.

With a relaxed and funny command of the room, she spoke out against the assault on Planned Parenthood, talked about her own experience of being pregnant in a male-dominated workplace, praised the Women's March and the town hall resistance to the Republican repeal plan, and delivered this inspiring call to arms:

.@HillaryClinton:"The other side never stops trying," we must fight twice as hard because these are "bad policies that will hurt people." pic.twitter.com/opmE7XzEz5

But let me let you in on a little secret. The other side never quits. Sooner or later, they will try again. We will need to fight back twice as hard, not for the sake of politics, but because these are bad policies that will hurt people, and will take our country in the wrong direction.

Hillary then shared what she called a "mantra" for the fight ahead:

You know there's a little mantra I've been repeating to myself lately. It's a little silly, the kind of thing that pops into your head when you take a lot of long walks in the woods. But as I think about the outpouring of activism we're seeing, despite all the noise and the nonsense, four words keep coming back to me: resist, insist, persist, enlist.

She went on to explain that we must "resist actions that go against our values as Americans," like demonizing Muslims and ignoring climate science; "insist on putting people first" by fighting for health care and equality in education; "persist" the way Senator Elizabeth Warren (D-MA) did, and "bring that to the voting booth in 2018"; and to "enlist" each other by running for office, or starting a business, or otherwise getting involved directly.

With just a tinge of wistfulness, she finished her speech by telling the crowd that while this isn't exactly where she wanted things to end up, she's still fighting:

So sure, the last few months haven't been exactly what I envisioned, although I do know what I'm still fighting for. I'm fighting for a fairer, big-hearted inclusive America. And the unfinished business of the 21st century can't wait any longer. Now is the time to demand the progress we want to see, and to work together to make it real in our own lives, in our businesses, in our government, in our families, our country, in the world. And I'll be right there with you every step of the way.

If the past few months of the resistance have shown us anything, it's that tens of millions of us will also be there with her, every step of the way.