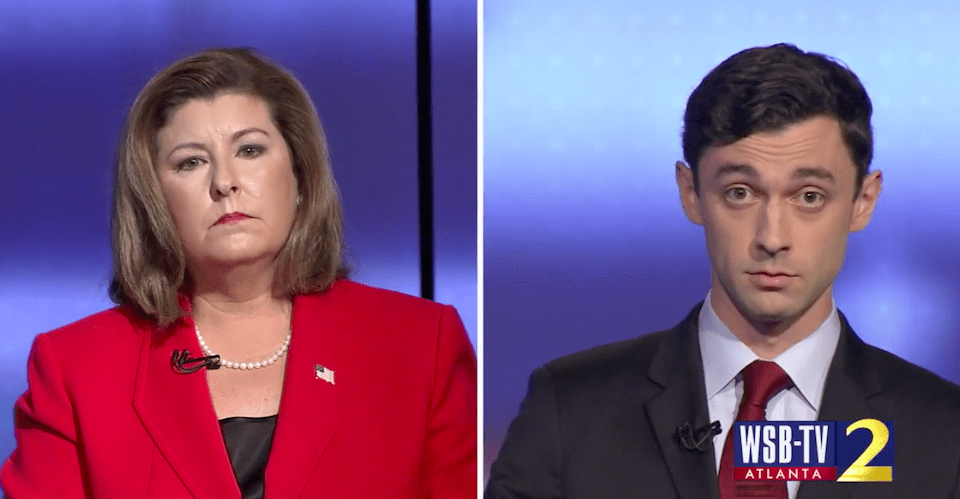 WSB-TV
Get The American Independent in your inbox

Georgia Republican Karen Handel has been trying to hide from her disastrous record of trying to cut off women's access to health care. But in their first debate, Democrat Jon Ossoff called her out for it and caught her flat-out lying.

In addition to being an anti-women's health extremist, she nearly destroyed the breast cancer foundation Susan G. Komen for the Cure by pushing for her anti-Planned Parenthood agenda.

And in their first debate for Georgia's 6th Congressional District, Democrat Jon Ossoff called her out on it:

Handel's response was nothing short of shocking. She denied responsibility for the decision made at Komen because of her efforts, in an obvious attempt to trick Georgia voters into thinking she had not tried to undermine women's health care:

HANDEL: And in regards to Komen, for anyone to think that as one individual employee, I was able to make a magic wand and make something like that happen. It was a business decision ultimately decided by the board of Komen. And I have been working on women’s health issues for nearly my entire life.

The simple and indisputable fact is that Komen cut off funding to Planned Parenthood's breast cancer screening programs because of Handel. As HuffPost's Laura Bassett reported at the time, in February 2012, Handel was the driving force behind Komen's disastrous decision.

Handel was the vice president for public policy, and immediately upon joining the organization, she sought to end its relationship with Planned Parenthood:

“Karen Handel was the prime instigator of this effort, and she herself personally came up with investigation criteria,” the source, who requested anonymity for professional reasons, told HuffPost. “She said, ‘If we just say it’s about investigations, we can defund Planned Parenthood and no one can blame us for being political.’”

The allegations Handel used for her guidelines were baseless, and she was soon forced to resign from the organization — which quickly reversed her terrible decision and tried fix the damage she wrought.

Handel would be a disaster for women's health if she were elected to Congress. And Ossoff — who supports Planned Parenthood and women's health care — was absolutely right to challenge her on her record because obviously, she has no good answer.