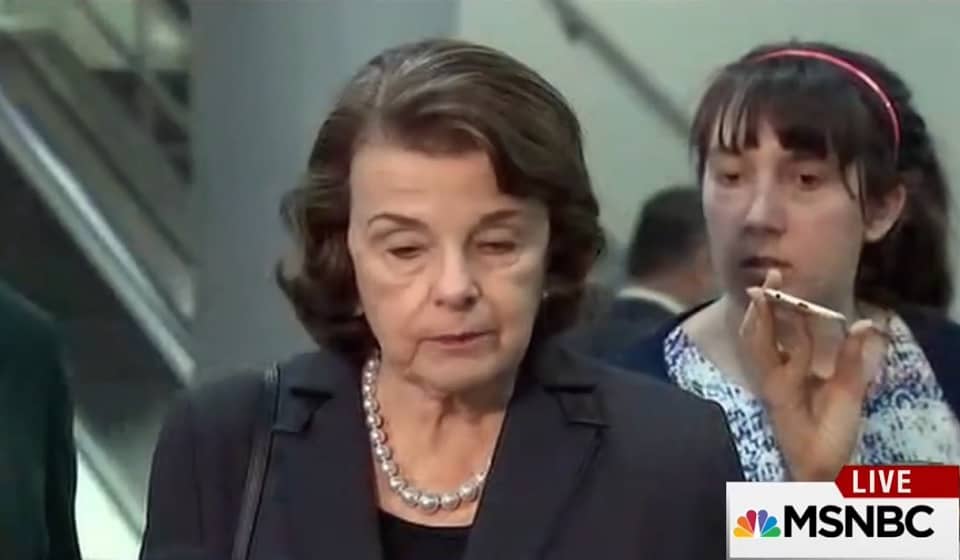 Following a "highly classified" briefing by the FBI Director to select members of the Senate and House, lawmakers emerged appearing worried.

FBI Director James Comey met separately with members of the Senate and House for highly classified briefings. Members went into the briefings looking for a firm answer from the FBI to the question of whether or not their was an ongoing investigation into possible ties between Donald Trump's presidential campaign and Russia but emerged silent on that question and appearing visibly disturbed.

On the Senate side, Comey met with the Chair, Senator Chuck Grassley, and Ranking Member, Senator Dianne Feinstein, of the Senate Judiciary Committee.

After the meeting, Feinstein spoke very briefly with reporters who had been waiting for the pair to emerge from the briefing:

Sen. Feinstein on meeting with FBI Dir. Comey: "This briefing was all on sensitive matters and highly classified" https://t.co/yU56Ikmx8Y

Long-time observers of events on the Hill noted the unusually somber appearances of the Senators:

I've seen Feinstein have the worried look on her face. This is more than that. She just met with FBI chief Comey.

@kurteichenwald She had a similar look when she announced Moscone & Milk had been shot by Dan White.

Also notable is the fact the meeting with Comey took place not just behind closed doors, but within a Sensitive Compartmented Information Facility (SCIF):

FBI Director Comey is in the Senate SCIF with Grassley and Feinstein. Schumer and Warner have also gone down.

As we previously reported, the Chair, GOP Representative Devin Nunes, and the Ranking Member, Democratic Representative Adam Schiff, met with Comey on the House side. Nunes came out of that briefing appearing likewise  and saying it was "very possible" information involving Trump himself had been collected as part of the incidental intelligence gathered when the U.S. intelligence community was monitoring Russian officials. Nunes and Schiff likewise appeared tight-lipped and visibly discomfited:

House Intel Chair Nunes says it's "very possible" Trump's communications were 'swept up' in the FBI surveillance of Russians —via @MSNBC pic.twitter.com/fXUorrYbSb

Additionally, Schiff took the unusual step of openly disagreeing with Nunes to assert it was not possible to say there were no contacts between the Trump campaign and Russia:

Reporter: "Do you have any evidence that there were contacts between the Trump campaign and Russians?"

Nunes: "I don't have any evidence of that, and we're not going to get into, I mean, this gets to the whole issue of incidental collection, you know, who else was talking to the Russian Ambassador. This is a slippery slope. I think you just need to let the appropriate agencies get us the information in a timely manner, which I agree with the Ranking Member on, the more that they stall, the more they make it more complicated for us, the slower the investigation goes and the more complicated it makes it for us to answer your questions."

Schiff: "I do want to say on that question because, Director Clapper [sic] was asked a similar question, I cannot answer that question the same way. Not certainly with the same categorical nature of the response. So, I don't share that summary conclusion, and that's about all I can say on that subject."

Judging from the unusual reactions to the information the members received from the FBI Director, the story about the extent and nature of communications between Donald Trump and his campaign associates and the Russian government is far from over. However it ends, the American people deserve to know whether Trump and his aides were complicit in Russia's activities to subvert the will of our electorate.