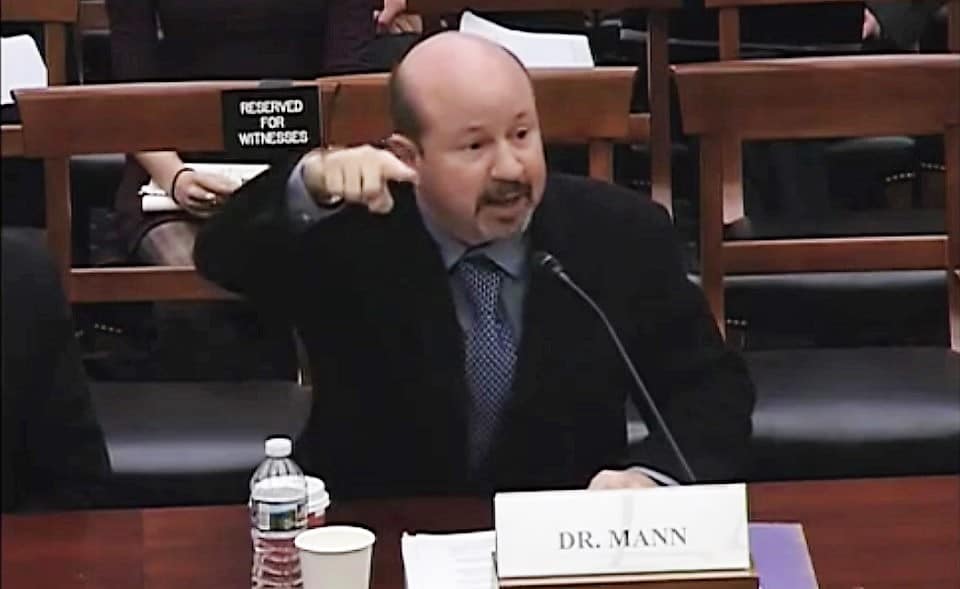 screenshot via YouTube
Get The American Independent in your inbox

In the midst of Donald Trump's all-out assault on the environment, the Republican-controlled House Science and Technology Committee held a sham hearing featuring three climate change "skeptics," and one scientist, invited by the Democrats, who accepts the overwhelming scientific consensus. It did not go well for the skeptics.

Donald Trump's presidency continues to be a disaster for the environment. The Energy Department's Climate Office banned use of the phrase "climate change," and Trump recently signed an executive order that seeks to gut Obama-era environmental protections in the name of jobs that are never coming back.

The Republican-controlled House "Science" Committee did its part as well, inviting three fringe climate change skeptics to testify at a sham hearing on, as they put it, "Climate Science: Assumptions, Policy Implications, and the Scientific Method."

Unfortunately for them, there are also Democrats on that committee, and they invited a real climate scientist, Dr. Michael Mann. The skeptics' game was clear from the outset: to assert that scientific "uncertainty" means, essentially, that since we do not know everything, we do not really know anything, and thus cannot act to reverse climate change.

The hearing featured many compelling moments in which Democrats pushed back against the GOP's denial of science and elicited telling testimony from the Republicans' witnesses, or in which Republican members made fools of themselves. There were two moments in particular, though, that neatly summed up the two-and-a-half hour exercise.

First, Rep. Mo Brooks (R-AL) shared a cockamamie theory that he heard from someone in Antarctica, and asked several witnesses to comment on it. Dr. Judith Curry clearly seemed to be humoring Brooks, but threw in several of her patented references to "uncertainty," while Mann replied by citing the actual science:

CURRY: There's uncertainty, but you've seen the accumulation over east Antarctic, whereas on the west Antarctic ice shelves, you're seeing net melting. So there's some spatial variability. And there is significant uncertainties in our estimates of all this, particularly the further back you go. [edit]

MANN: Yeah, so we have widespread measurements now, from satellites, direct measurements of the total ice mass contained in the ice sheets, and there's no question that the two main potential contributors to global sea level rise, the Greenland Ice Sheet and the West Antarctic Ice Sheet, are losing ice. And we know that that loss of ice means that the ice sheets are contributing to sea level rise already. Now, we hear so much about "uncertainty," as if uncertainty is a reason for inaction, but in this case, the uncertainties are breaking against us, because we are actually seeing more rapid loss of ice from those ice sheets than the climate models, that many here criticize, had predicted in the past. That means that we are going to see more sea level rise, in the near term, than the models had predicted. In this case, uncertainty is not our friend, it's breaking against us.

The other recurrent theme of the hearing was Republicans and their witnesses complaining about how mean people are to them, when all they are trying to do is fight efforts to keep the Earth habitable for human life. That theme was so successful that it managed to color what little mainstream media coverage the hearing received.

In one particularly memorable moment, Mann tried to correct the record by claiming that he had not called any of his fellow panelists "climate change deniers," which resulted in an exchange with Curry over his written testimony, in which Mann called her a "climate science denier." While Mann tried to explain the distinction, committee chairman Rep. Lamar Smith (R-TX) smugly entered that written testimony into the record (again) with a victorious flourish:

That sense of victory, however, was short-lived when, mere seconds later, Rep. Bill Foster (D-IL) asked the panelists if they agreed it was more likely than not that climate change would eventually become a problem, and Curry denied the climate science to which Mann had been referring:

FOSTER: So you all think, would agree, that it's more likely than not that this will be a big problem?

CURRY: Yes, I would say that we don't know.

FOSTER: No, do you think it is more likely than not that this would be a big problem?

CURRY: I would say as likely as not.

MANN: Well, I just want to say that's what I'm talking about, I didn't call Judith Curry a "climate change denier" here today. There is a statement in the written statement that she's a science, a "climate science denier," and this is precisely what I'm talking about. She has argued that we might be responsible for less than 50 percent of the warming that we have seen. The IPCC has assessed that, they've actually estimated the likelihood that that could be true, it's one in ten thousand. One in ten thousand is the likelihood of something that she claims to be true. That is a rejection of basic climate science. (crosstalk) It's a rejection of science.

This is, in a nutshell, the entire problem with the climate change "debate" — the false equivalency between an overwhelming scientific consensus and fringe deniers. Calling someone who denies climate science a "climate science denier" is just telling the truth, and it is not the same as referring to that scientific consensus as "Stalinist." Over-representing fringe science by 2500 percent in a sham hearing doesn't change that.

Trump and the Republicans are hell-bent on destroying any efforts to mitigate climate change, but Democrats and scientists like Mann are not going to let them do it without a fight.