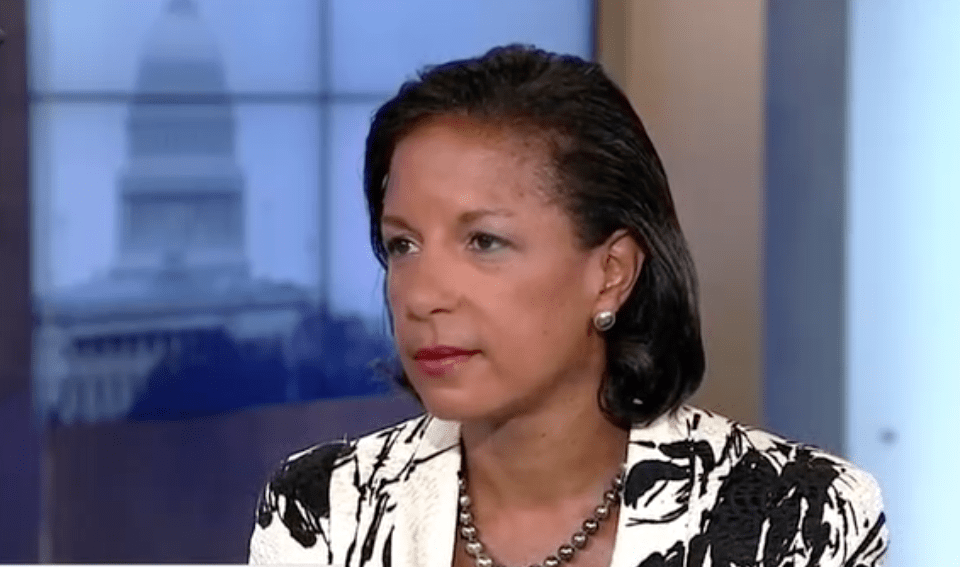 Susan Rice calmly and carefully debunked the ludicrous right-wing conspiracy theory about her promoted by the Trump administration, while also pointing out how absurd Trump's theories about Obama have been.

Former Obama UN Ambassador and National Security Advisor Susan Rice appeared on MSNBC's Andrea Mitchell Reports and calmly and carefully debunked the recent conservative attack on her, which alleged that she misused her position to target Donald Trump officials for "unmasking" by security agencies during the election.

Rice told Mitchell that the claim coming from Trump and his supporters that Obama officials like her unmasked names for political supporters was "absolutely false."

When asked if she had leaked former National Security Advisor Michael Flynn's name as some conspiracy theorists have claimed, Rice said, "I leaked nothing to nobody. And never would." She added, "People seem to think asking for the ID of an American person is the same as leaking, and that is absolutely false."

MITCHELL: This is a fire storm. It is involved with the whole question of the Russia investigation and the response by President Trump, and now these accusations against you. How do you respond?

RICE: Well, Andrea, this is not anything political has been alleged. The allegation is that somehow Obama administration officials utilized intelligence for political purposes. That's absolutely false.

Let me explain how this works: I was the National Security Advisor. My job is to protect the American people and the security of our country. That's the same as the Secretary of State, the Secretary of Defense, the CIA director. And every morning, to enable us to do that, we receive from the intelligence community a compilation of intelligence reports that the IC, the intelligence community, has selected for us on a daily basis to give us the best information as to what is going on around the world. I received those reports, as did each of those other officials, and there were occasions when I would receive a report in which a U.S. person was referred to. Name not provided, just 'U.S. person.' And sometimes in that context, in order to understand the importance of the report, and assess its significance, it was necessary to find out, or request the information as to who that U.S. official was.

Let me give you just a hypothetical example. This is completely made up: Let's say there was a conversation between two foreigners about a conversation they were having with an American, who was proposing to sell to them high-tech bomb making equipment. Now, if that came to me as National Security Advisor, it would matter enormously. Is this some kook sitting in his living room communicating via the internet offering to sell something he doesn't have, or is this a serious person, or company, or entity, with the ability to provide that technology, perhaps to an adversary? That would be an example of a case where knowing who the U.S. person was was necessary to assess the information.

So when that occurred, what I would do, or what any official would do, is to ask their briefer whether the intelligence committee would go through its process, and there's a long-standing established process, to decide whether that information as to who the identity of the U.S. person was could be provided to me. So they would take that question back, they'd put it though a process, and the intelligence community made the determination as to whether or not the identity of the individual could be provided to me. That is what I, and the Secretary of State, Secretary of Defense, CIA director, DNI, would do when we received that information. We only do it to protect the American people, to do our jobs in the national security realm. That's the only reason.

RICE: Absolutely not for any political purposes, to spy, expose, anything —

MITCHELL: Did you leak the name of Mike Flynn?

RICE: I leaked nothing to nobody and never have and never would. But let me explain this: First of all, Andrea, to talk about the contents of a classified report, to talk about the individuals on the foreign side, who were the targets of the report itself, or any Americans who may have been collected upon, incidentally, is to disclose classified information. I'm not going to do that.

MITCHELL: The allegation is that in one case, they are alleging in the Daily Caller that there was a spreadsheet that you printed out of all of these names and circulated.

RICE: Absolutely false. No spread sheet, nothing of the sort. And let me also elaborate and say when the intelligence community would respond to a request from the senior National Security official for the identity of an American, that would come back only to the person who requested it, and it would be brought back to them directly.

MITCHELL: To you directly?

RICE: To me, or to whoever might have requested it, on occasion, and this is important. It was not then typically broadly disseminated throughout the national security community or the government. So the notion which some people are trying to suggest that by asking for the identity of an American person, that is the same as leaking it, is completely false. There is no equivalence between so-called unmasking and leaking.

Later, Mitchell asked Rice about Trump's wild allegation that President Obama had secretly wiretapped him in Trump Tower. Rice responded, "It was not typical of the way that presidents treat their predecessors."

MITCHELL: Is there any truth to President Trump's claim on Twitter, exactly a month ago, early one Saturday morning on March 4th, that President Obama was eavesdropping on him at Trump Tower?

RICE: Absolutely false. And the intelligence community, the director of the FBI, has made that very clear. There was no such collection, surveillance on Trump tower or Trump individuals.

MITCHELL: At the same time, the president, his associates, their names could have been bandied about by foreign officials, they could have been picked up in incidental collection?

RICE: Yes, that is possible.

MITCHELL: And you could have asked for those names – American #1, American #2, however it is identified, to be unmasked so you would know how significant it was?

RICE: That is exactly right, Andrea. The fact is if, whether we're talking about Russia or any other topic, if I saw an intelligence report that looked potentially significant, and understand by definition, if it is being provided to me, it is significant. I don't solicit reports, I only receive what the intelligence community thinks I or any other senior official needs to see. So they're giving it to me, if I read it, and I think that in order for me to really understand is it significant or not so significant, I need to understand who the U.S. person is, I can make that request. The intelligence community then process that request through their normal procedures and if they feel they can give the answer, they will give the answer.

That comes back to me, not to anybody broadly in the national security world, and that is necessary for me to do my job. It is necessary for the Secretary of State, or the Secretary of Defense, or the CIA director to do their jobs. We can't be passive consumers of this information and not — and do our jobs effectively to protect the American people. Imagine if we saw something of grave significance that involved Russia, or China, or anyone else, interfering in our political process and we needed to understand the significance of that. For us not to try to understand it would be dereliction of duty.

MITCHELL: What did you first think when the president tweeted that President Obama had eavesdropped on him?

RICE: I was surprised. I was shocked. I think many people were. That's a very serious allegation, it had no basis in fact, and it wasn't typical of the way that presidents treat their predecessors and it's not indicative of the tone and collaboration that we sought to achieve.

The Rice conspiracy is the latest attempt by team Trump to throw up a smoke screen as the walls continue to cave in on his presidency, as his alliance with Russia, inability to govern, and rampant corruption become clearer.