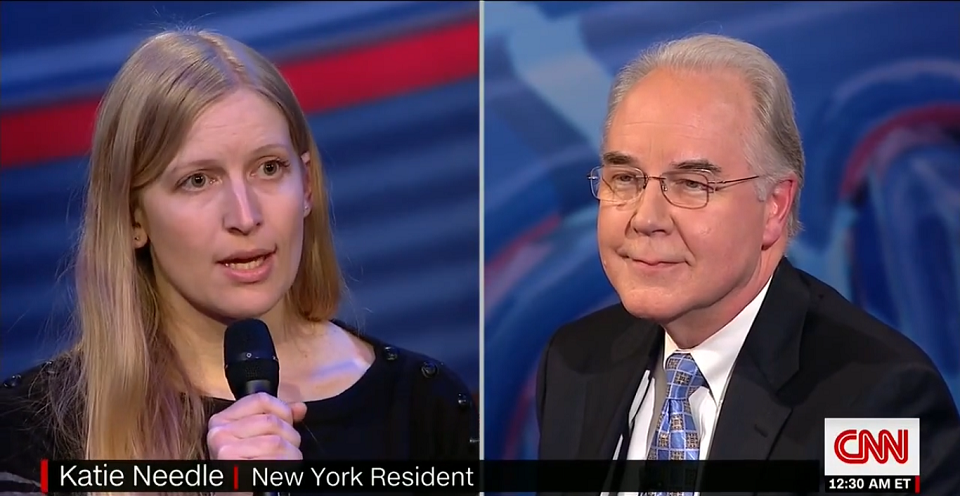 Among the many lowlights, one bright spot at CNN's town hall with Health and Human Services Secretary Tom Price was a Brooklynite named Katie Needle, who strongly confronted Price about the Republican repeal plan's defunding of Planned Parenthood.

Resistance to the Republican health care repeal plan grows stiffer every day, and was much in evidence at CNN's town hall with Health and Human Services Secretary Tom Price.

After being forced to lie to a cancer patient who will be thrown off his health coverage by the GOP plan, Price was confronted by Katie Needle over the plan's defunding of Planned Parenthood.

Price repeatedly brought up the percentage of health care providers who participate in Medicaid as a mark against Obamacare. Needle, an executive assistant from Brooklyn, drew huge applause when she pointed out the obvious fallacy of Price's talking point:

And I just want to call back — this wasn't part of my question — but I just want to call back, because you earlier brought up Medicaid specifically and complained about how one of the biggest problems under Obamacare was that only a third of doctors were accepting Medicaid. This plan chooses to cut a provider that sees over a million Medicaid patients every year.

So if that is your big problem with Obamacare, then how does that make any sense? That's not my question.

The moment drew an extended round of applause, but Needle was not finished. She then asked Price how the Republican plan will serve the millions of people who depend on Planned Parenthood for health care:

PRICE: Yeah, this is an important question, because the fact of the matter is that the American people have for decades said that they didn't want their tax dollars, their federal tax dollars, to be used for the provision of abortion services. And so what we have tried to do, when I was in Congress and now with the administration, is to respond to the desires of the American people in a way that answers their concerns.

The fact of the matter is that what the bill does that is before Congress right now actually increases, increases money for women's health services. And we do so by providing those monies through community health centers. There are over 13,000, if my number's correct, over 13,000 community health centers across this country, and they're in the hundreds of Planned Parenthood facilities. So what we're trying to do is respond to the American people and their concerns about having their tax dollars, federal tax dollars used for the provision of abortion services, and make certain that women not only have more ability to get to a health center, but have more resources to be able to do so.

Price is just wrong when he says that already-overburdened community health centers could replace Planned Parenthood, and he is flat-out lying about taxpayer funding for abortion, which is already illegal. It is true that a majority of Americans support that law, the Hyde Amendment, which rejects the Republican "money is fungible" talking point. And a whopping 80 percent of Americans oppose cutting funding to Planned Parenthood for non-abortion services.

Americans are also rejecting the Trump/Republican repeal plan by huge margins, and will continue to do so as long as Republicans attack an extremely popular institution, upon whom millions of people rely for primary health care.