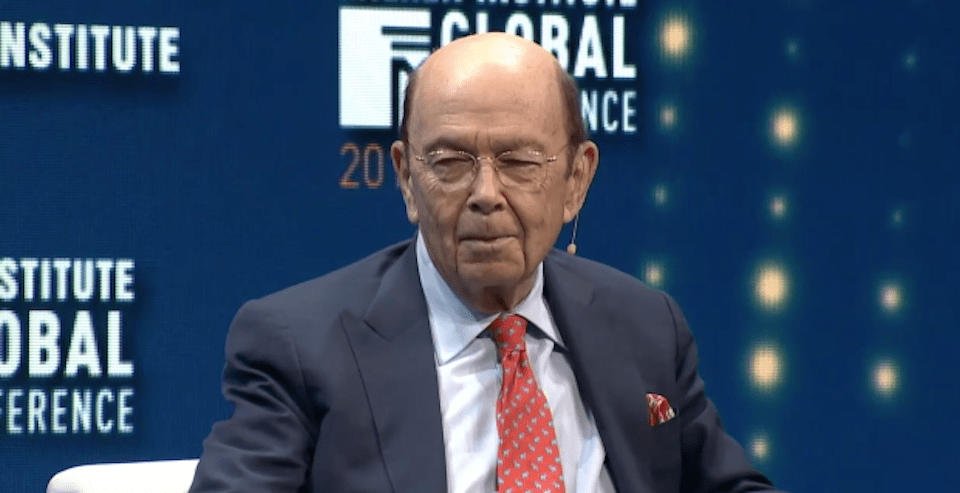 Livestream.com
Get The American Independent in your inbox

Secretary of Commerce Wilbur Ross chillingly illustrated Donald Trump's dangerous view of presidential power when he joked that the Syria airstrike was "after-dinner entertainment" at Mar-a-Lago.

Donald Trump's outrageous and abusive firing of FBI Director James Comey is just the latest demonstration that he wields presidential power like a clumsy, Godzilla-sized toddler. That move stunned even those critics of Trump who have come to expect almost anything from this administration.

But new video from the recent Milken Institute Global Conference provides another reminder of just how frightening this administration's view of presidential power can be.

Speaking at the conference last week, Secretary of Commerce Wilbur Ross described the evening at Mar-a-Lago during which Trump informed Chinese President Xi Jinping of his unilateral and ultimately ineffective airstrike on a Syrian airbase.

Ross joked that the 59 Tomahawk cruise missile strike served as "after-dinner entertainment" that "didn't cost the president anything," to the amusement of the audience, as well as moderator and Carlyle Group founder David Rubenstein:

RUBENSTEIN: The president, in the campaign, was fairly negative about China's impact on us in terms of the big trade deficit. Yet he had a meeting, I think you were at the dinner at Mar-a-Lago, and did president say, "Well, I'm not happy with your trade posture, but if you help me with Kim Jong-un, I might be able to help you a little bit?" And, how did that work?

ROSS: Well, the most bizarre thing about the dinner was obviously that just as dessert was being served, the president explained to Mr. Xi that he had something he wanted to tell him, which was the launching of 59 missiles into Syria. So, it was in lieu of after-dinner entertainment that we staged that.

ROSS: Well, the thing was, it didn’t cost the president anything to have that entertainment.

The fact of the matter, of course, is that Trump's "after-dinner entertainment" didn't cost him anything, but it cost American taxpayers $60 million just to replace the 59 missiles that were launched. That is equal to the amount of taxpayer money that was recently appropriated to pay the expenses for Trump's frequent vacation travel.

People also lost their lives in the strike, which, for most people, is in no way comparable to the stylings of a lounge singer.

Ross' comments were reported at the time, but without video of the two billionaires quipping about the taxpayer-funded "entertainment" of a deadly airstrike, the story didn't gain much traction. Curiously, archived video of the Ross event wasn't uploaded until eight days later, while every other event at the conference was available within hours.

The Milken Institute did not return Shareblue's calls for comment about the delay.