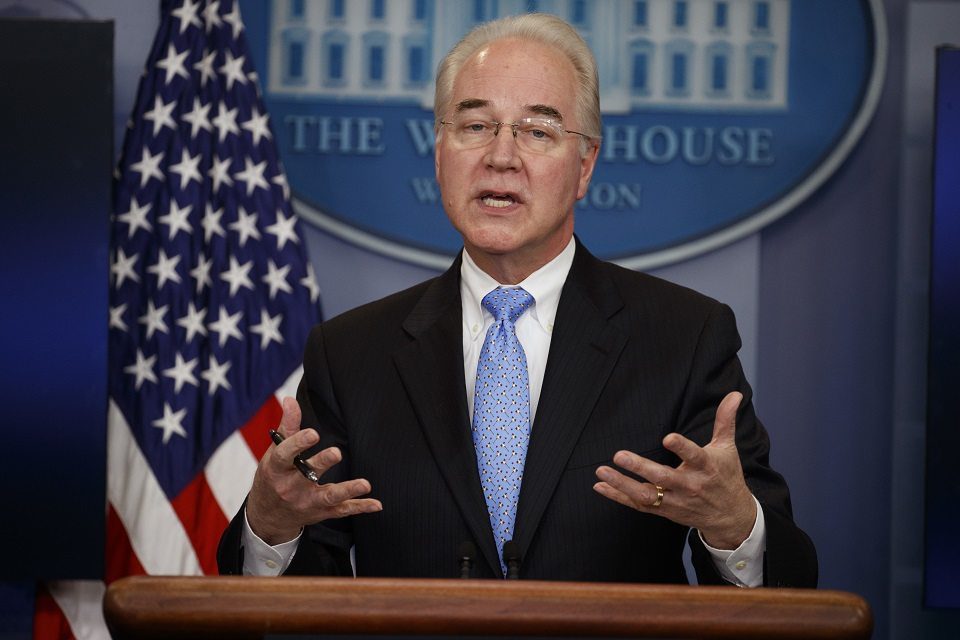 Department of Health and Human Services Secretary Tom Price was Sean Spicer's opening act at the first televised White House briefing in over a week, and he gave a stunning non-answer when asked if the Republicans' replacement plan would result in millions of people losing health insurance.

At Sean Spicer's first televised White House briefing since the Republicans rolled out their disastrous "replacement" for Obamacare, at which he was accompanied by Health and Human Services Secretary Tom Price, the dais featured this simplistic visual aid:

Prediction: the pile on the left is GOP #MakeAmericaSickAgain bill, the right is Obamacare pic.twitter.com/2r5aBLFMyF

Price explained that the purpose of those props was just that: To demonstrate that the Republican plan is smaller than the Affordable Care Act was.

That comparison quickly turned ironic when Price was unable to comment on the provision of the bill that gives tax breaks to insurance company CEOs because he claimed not to have seen it.

Price took questions for about half an hour, including this rather pointed inquiry about the fact that the Congressional Budget Office has yet to score the GOP's plan. Asked if he could guarantee that the plan would neither increase the deficit nor throw millions of people off of their insurance, Price would offer only this reassurance:

REPORTER: Keeping in mind that the CBO score isn't in yet, can you guarantee that this plan will not have a markedly negative impact on the deficit, or result in millions of Americans losing health insurance?

PRICE: What I can say is that the goal and the desire, I know, of the individuals on the Hill, is to make certain that this does not increase the cost to the federal government.

Of course, the CBO has already stated that a repeal of Obamacare would result in 36 million more uninsured Americans by 2026, and Price's response indicates not only a refusal to guarantee that will not happen, but that preventing such an outcome is not even a goal. According to Standard & Poors, the GOP plan could result in 10 million fewer insured.

As to the cost, the CBO has also previously stated that repeal would blow a hole in the deficit, and the Republican plan does not address that at all.

The Republican plan may indeed be much shorter than the Affordable Care Act in actual pages, but that means it is shorter on substance, as well. And as Price's non-response makes clear, the GOP's "plan" will likely lead to millions of Americans losing their affordable health insurance.