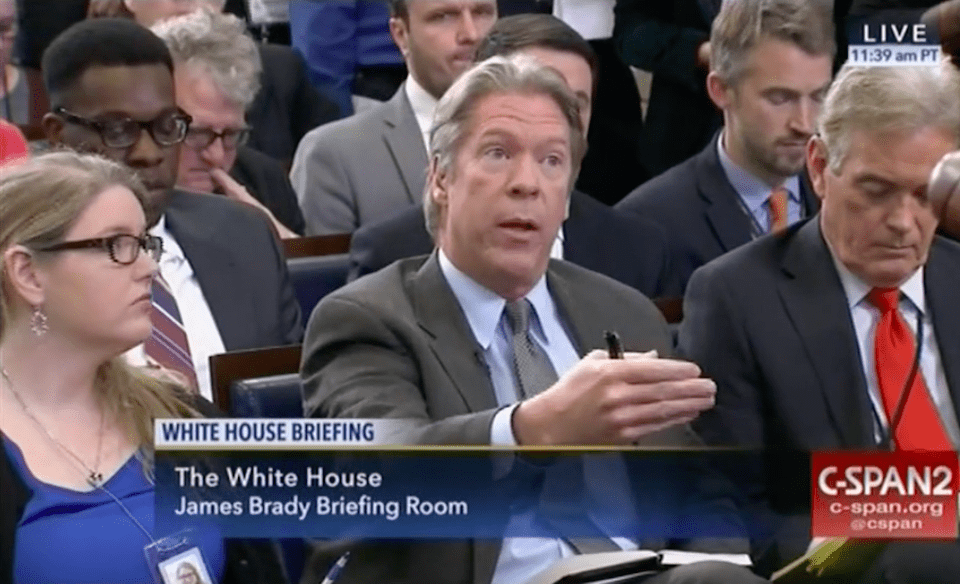 White House Press Secretary Sean Spicer has repeatedly played fast and loose with the truth as he unsuccessfully tries to cover up for Donald Trump's mistakes and provocations in the White House.

When that happens, what is needed is a White House press corps willing to hold Spicer and his boss to account for their words and actions — a function of the watchdog press that too often goes unfulfilled, especially in the daily briefing.

After Trump tweeted that his former national security adviser Michael Flynn "should ask for immunity" as part of ongoing congressional probes into Russian election interference, which Trump falsely characterized as "a witch hunt," Garrett pressed Spicer to be clear on what Trump was asking for.

Spicer attempted to stonewall him and continue the White House's attempts to ignore the consequences of Trump's tweets, but Garrett persisted, asking calmly for clarity instead of spin, noting that Trump's comments have weight no matter where they happen.

Eventually Spicer relented, admitting that Trump was not instructing Congress or the FBI to offer Flynn immunity.

GARRETT: You frequently tell us to take the president's tweets at face value, and they speak for themselves. So, when the president says that Mike Flynn should get immunity, is he suggesting to Congress that it grant immunity?

SPICER: I think Mike Flynn and his legal counsel should do what's appropriate for Mike Flynn.

GARRETT: But that isn't — they cannot obtain immunity. It must be granted.

SPICER: Right. And again, to your question —

GARRETT: Is the president recommending, either to the FBI or to Congress, that it grant immunity? Because that's the only way it can happen.

SPICER: I understand, but again, he didn't say 'Congress should grant.'

GARRETT: That's why I'm asking. What does he mean by that?

SPICER: What he means is he supports Mike Flynn's attempts to go up to Congress and be very clear with everything that they ask and what they want.

GARRETT: Right, but he could've just said testify; he said he should get immunity. And I'm asking you because it's important.

GARRET: Every lawyer who works on this tells you it's extremely important to seek it and then obtain it. And there's only one way you can seek it: By it being granted either by the FBI or by Congress. And for the President of the United States to even lightly indicate that he is in favor of that, it seems to me is a significant development. I'm trying to find out if that's what the president was trying to accomplish.

SPICER: And I'm trying to answer the question, which is that I think what the — not that I think, I've talked to the president about this —

SPICER: Yes. And the president is very clear that he wants Mike Flynn to go and be completely open and transparent with the committee, and whatever it takes to do that he is supportive of.

GARRETT: Even if he doesn't obtain immunity?

SPICER: He wants him — again, I want to be clear: He wants him to do what is necessary to go up there and talk to the committees of jurisdiction to get this matter behind us.

GARRETT: And since you've talked to the president about this, he was not trying to suggest to the FBI or the Justice Department that it grant immunity to Michael Flynn?

SPICER: I think he was asking — I'm not entirely sure of the process, whether Congress does it or DOJ or both in this case. But the point is — right, I understand. The bottom line is —

SPICER: What he is asking is that Mike Flynn do everything he can to cooperate with the committees that he's asked to look into this.

Shareblue's Tommy Christopher, a longtime White House press colleague of Garrett's, observed, "Major has always had a knack for nailing the substance of an issue, and he nailed Spicer with it today."

Trump had long signaled his intent to be hostile to the press and opaque to the public — a public which now pays his salary. The reporters in the room should keep this in mind, and take a lesson from Garrett not to let Trump's team get away with disinformation and evasion.

More than 1 in 10 American workers lost their jobs in the past 3...