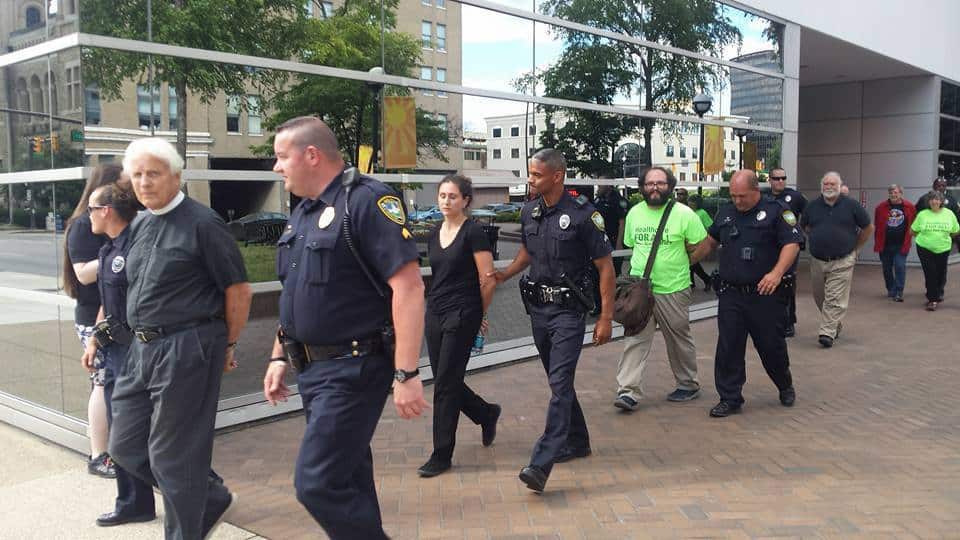 Rise Up WV
Get The American Independent in your inbox

Sen. Shelley Moore Capito's constituents were taken into custody while trying to defend access to health care for all Americans.

Six constituents of Republican Sen. Shelley Moore Capito were arrested Monday at her office in Charleston, West Virginia, after performing a sit-in to protest the GOP plan to repeal health care coverage.

The group went to Capito's office hoping to convince the senator to vote against the bill, with a sign saying "Senator Capito: Whose side are you on? Vote No on ACHA – Yes to Healthcare for All! Stop playing politics with our lives!"

Upon discovering the senator was not in her office but rather in Washington, D.C., the constituents began a sit-in and pledged not to leave until Capito agreed to vote against the bill.

But soon enough, police showed up on the scene, and took the protestors into custody.

During the arrests, the police said that "We really don't like doing this at all." Nonetheless, the four men and two women were handcuffed and removed from the scene.

Some wore bright chartreuse shirts with  "Healthcare FOR ALL – Why not now?" emblazoned on them. A member of the clergy wore his collar.

The protesters had live-streamed what was happening, garnering tens of thousands of views on Facebook. They read personal accounts collected from other West Virginians desperate about the possibility of losing access to health care, and posted the phone numbers of Capito's various offices asking those who were watching to call.

Bill Price, one of the participants, commented:

In West Virginia, we value generosity and helping out our neighbors ... Senator Capito would not be representing our West Virginia values if she votes for a bill that would throw families off of Medicaid and eliminate over 10,000 jobs in the healthcare sector, just to enrich a wealthy few.

The Republican bill to repeal the Affordable Care Act is a massive tax cut for the wealthiest Americans paid for with "blood money" and American lives.
SaveSave