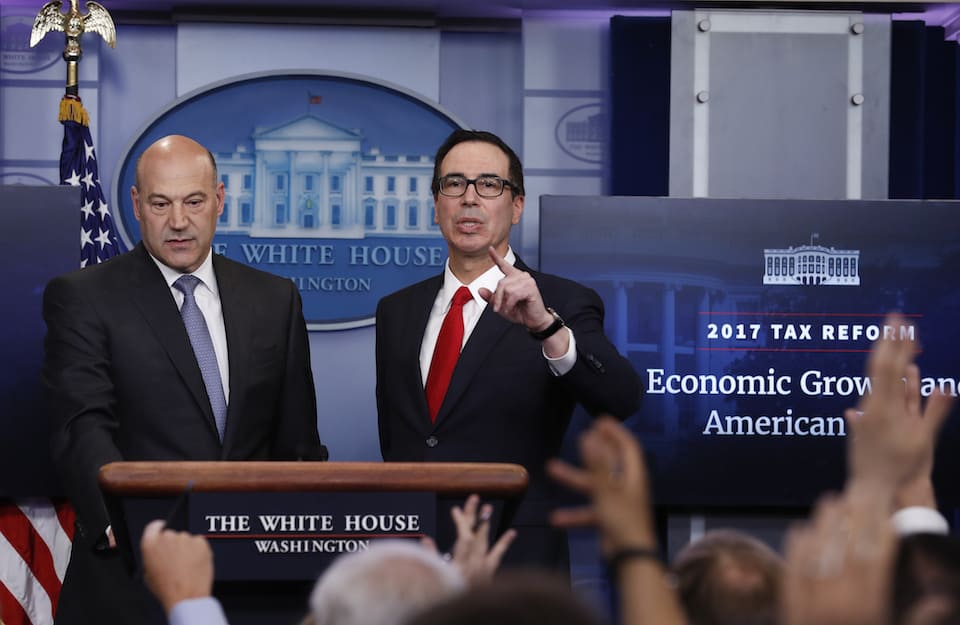 Treasury Secretary Steve Mnuchin held a press briefing to tout Donald Trump's thin "tax plan," but ABC News Chief White House Correspondent Jonathan Karl was there to challenge him, by asking if Trump will release his tax returns so Americans can learn how the plan benefits him.

What should have been a fairly routine public relations exercise, however, abruptly went south for Mnuchin thanks to ABC News Chief White House Correspondent Jonathan Karl.

Karl began asking Mnuchin if Trump would release his tax returns so that Americans could assess whether the plan will personally benefit Trump, but Mnuchin cut him off in mid-question, likely sensing what was coming. As Karl doggedly finished his question, Mnuchin talked over him, rudely telling him that "other people have the right to ask questions."

KARL: My second question is, will the president release his tax returns so that Americans —

KARL: Don't the American people have the right to know how the tax reform plan —

MNUCHIN: Excuse me. Other people — other people have the right to ask questions.

KARL: — will affect him personally?

Karl's line of questioning is powerful, because just from the (possibly Trump-leaked) single bit of tax information we have on Trump, we know that his plan to repeal the Alternative Minimum Tax would have saved him most of the $38 million he paid in taxes that year. By getting Mnuchin to show his chin like this, Karl has ensured that this question will dog Trump and his White House whenever the subject of "tax reform" comes up.

What Karl has also done is hand Democrats yet another strategy to pressure Republicans into joining them in demanding Trump's tax returns. Every committee that considers these measures will now have solid, politically bulletproof grounds on which to compel Trump to release his tax returns, whether it is his "intention" to do so or not.