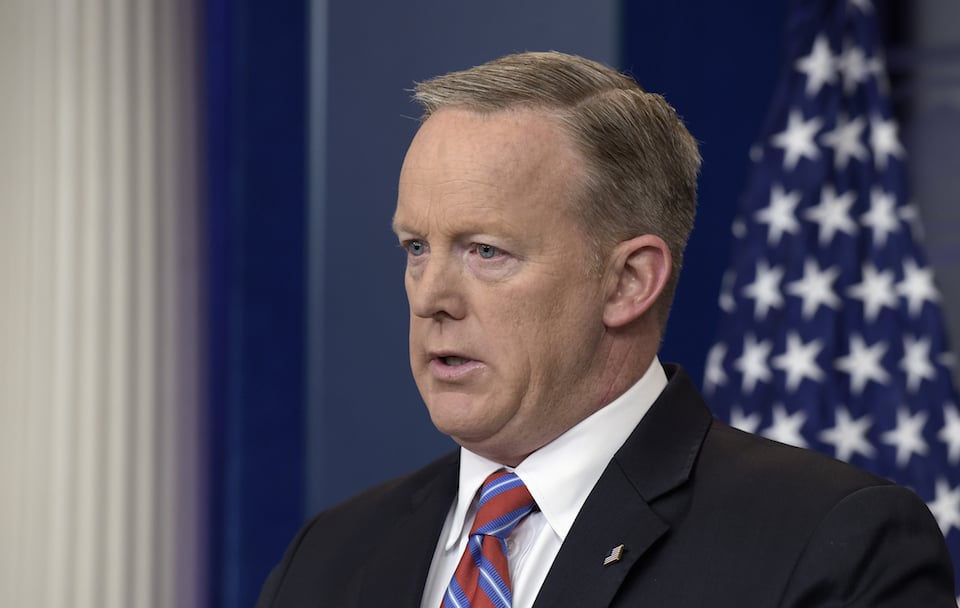 Donald Trump's schedule has been even lighter than usual these days, which caused one reporter to bluntly ask Sean Spicer, "What is he actually doing all day long?" Spicer didn't have much to offer in response.

One of the many deleterious features of Donald Trump's time in office has been his leisurely schedule of what can loosely be described as "work," consisting largely of ornamental meetings, phone calls, and photo ops that occasionally intrude on golf and dinner. And of course, hours of watching TV.

Even for Trump, though, his recent schedules have been wafer thin, and journalists are beginning to point this out.

At a recent White House briefing, CNN White House correspondent Sara Murray voiced what many of us are wondering when she asked press secretary Sean Spicer what Trump is "actually doing all day long."

Spicer, true to form, offered a jumble of words in response, which amounted, essentially, to him citing preparations for an upcoming trip:

MURRAY: One other question. Can you just give us a better sense of what the president has been doing with his time the last few days? We haven’t had very detailed schedules, we haven’t been seeing him publicly. He’s only had one or two meetings. So what is he actually doing all day long?

SPICER: Thanks. I mean, as I said at the top, the president is going on a nine-day — eight-day trip. He’s going to Saudi Arabia, Israel, Rome, the G7, NATO. This is an opportunity next week, as I mentioned — he’s going to have the Crown Prince here, he’s got a commencement speech at the Coast Guard Academy.

Part of the use of this week is to be meeting with the principals the head of — the directorates of the countries that we’re going to ahead of the meetings where he’s receiving extensive briefings throughout the week with his team. He’s had several meetings with General McMaster over the last couple weeks. He was one of the leaders in the effort for this trip. He’s met with the chief of staff, his legislative team. He was just meeting when I walked out of the Oval Office with part of his economic team.

Trump's foreign trip — to Riyadh, Jerusalem, Rome, Brussels, and Taormina — doesn't begin until May 18, and much of the activity that Spicer cited to pad out Trump's daily inactivity is not typically noted on presidential schedules because it is so routine. The president doesn't "meet with" his chief of staff; that's just a guy he works with.

What we do know of Trump's activities is not good. He spent at least part of his day Tuesday firing FBI Director James Comey and then watching — and mocking — reactions on TV. The only event he has scheduled for Wednesday is a closed-press meeting with Russian Foreign Minister Sergey Lavrov, perhaps so they can trade Comey jokes.

Trump has also found lots of time to tweet juvenile propaganda aimed at quashing concerns over his firing of Comey.

Given Trump's destructive tendencies when he is working, his inactivity may seem like a blessing, but it bears repeating again and again: none of this is normal.