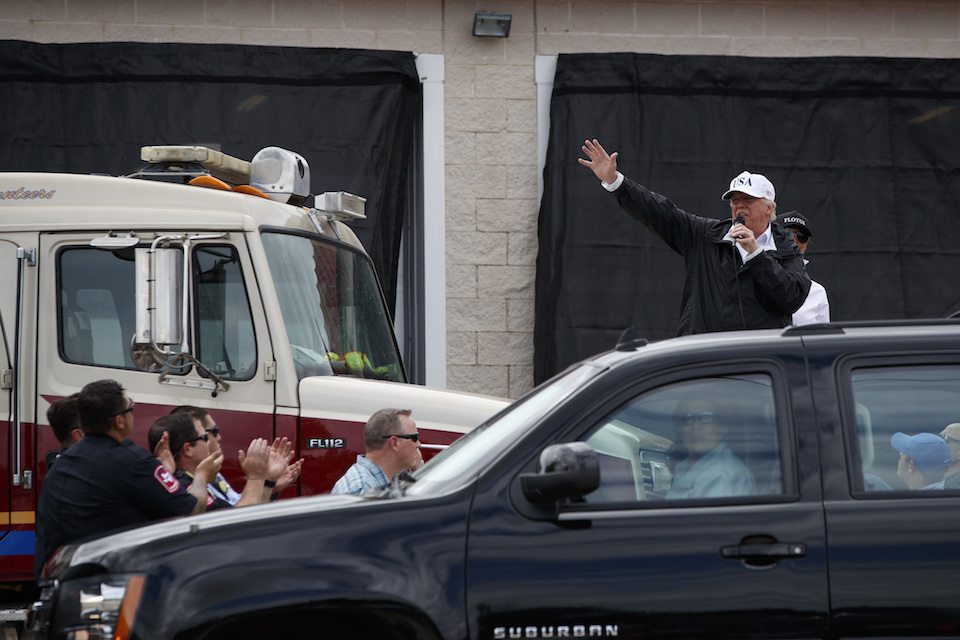 Even when he is supposed to be giving comfort and assurance to Americans devastated by a natural disaster, Trump can't help his obsession with crowd size.

Donald Trump's response to Hurricane Harvey has gone from bizarre and inappropriate to profoundly unpresidential.

During a televised briefing in Corpus Christi, Texas, Trump managed to leave out any mention of the victims of the hurricane that has ravaged Houston and is predicted to displace tens of thousands of people, or the 14 people who have died already.

But Trump wasn't finished showing the country and the world how sure he is that this disaster is very much about him. Standing atop a fire engine, Trump addressed the hundreds of Texans who had gathered by crowing about one of his favorite subjects: his crowd size.

TRUMP: I just want to say, we love you, you are special, we're here to take care, it's going well, and I want to thank you for coming out. We're going to get you back and operating immediately. Thank you, everybody. What a crowd, what a turnout. [...] I will tell you, this is historic. It's epic, what happened. But you know what? It happened in Texas, and Texas can handle anything. Thank you all, folks. Thank you, thank you.

Trump appears utterly incapable of grasping the seriousness of the situation or his role in it. A president's job at such a time is to provide comfort and assurance to the country — not to gleefully anticipate congratulations or brag about crowd size and the "historic" nature of the disaster. And it's certainly not to market his own campaign swag, solicit donations for his re-election campaign, or try to get good TV ratings.

But Trump doesn't get it, as he has made painfully and uncomfortably obvious in the last few days. Which is a terrible shame for the country, at a time when Americans need and deserve someone who does get it.