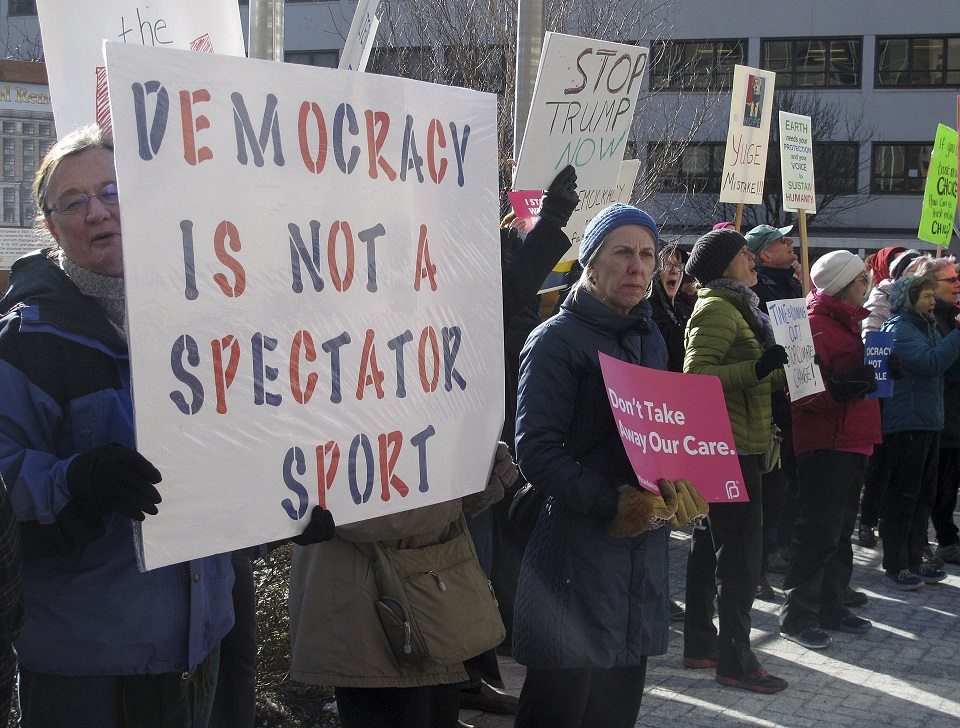 (AP Photo/Becky Bohrer)
Get The American Independent in your inbox

On Tuesday, Democrats took two out of three open seats in the Connecticut special election, keeping their majority in both chambers of the state legislature.

Last night, the corporate media spent all its time on coverage of the disaster that was Donald Trump's first address to a joint session of Congress. But while Trump was on national television, grassroots Democratic activists were hard at work delivering an electoral victory in Connecticut.

Three seats in the Connecticut General Assembly were vacant: Two in the state senate and one in the state house. Their legislators, two Democrats and one Republican, had resigned to accept positions in Governor Dan Malloy's administration.

This was a highly important contest, because the state senate was tied 17 to 17, with both a Democratic and a Republican open seat up for grabs. Lieutenant Governor and Senate President Nancy Wyman can break ties for Democrats, but the loss of a state senate seat would have officially flipped the chamber to Republicans.

Despite this, any coverage of the race was preempted by Trump's address. In fact, this election received so little attention that the Connecticut Secretary of State did not even provide a results page on election night.

Nonetheless, Connecticut Democrats stepped up. A surge of turnout delivered a victory in two out of the three races, preserving Democratic control of both chambers.

Although Democratic representative Greg Cava failed to defeat Republican Eric Berthel in the 32nd Senate District, he came within 10 percent, the strongest showing in decades by a Democrat in one of the state's most solidly Republican districts.

The upshot is that Democrats beat back Republican challenges to their majorities in the state legislature, just as they did in last week's special election in Delaware.

In a statement, DNC Chair Tom Perez noted the importance of these state-level elections:

Democrats also came within approximately 1,800 votes of flipping the most Republican Senate district in the entire state, showing that even Republicans running in GOP strongholds aren’t safe from the shadow of Trump. Republican politicians across the country should be shaking in their boots at the thought of defending Trump’s disastrous presidency at the ballot box.

Several more special elections are on the calendar in congressional districts and state legislatures around the country, most notably the House seats in Georgia and South Carolina vacated by Trump appointees Tom Price and Mick Mulvaney, and several open Republican seats in the Washington state senate, which the GOP controls by only one vote.

Democrats must harness their continued groundswell of support to keep winning local races. Every effort to build the opposition from the ground up will make stopping Trump's agenda that much easier.