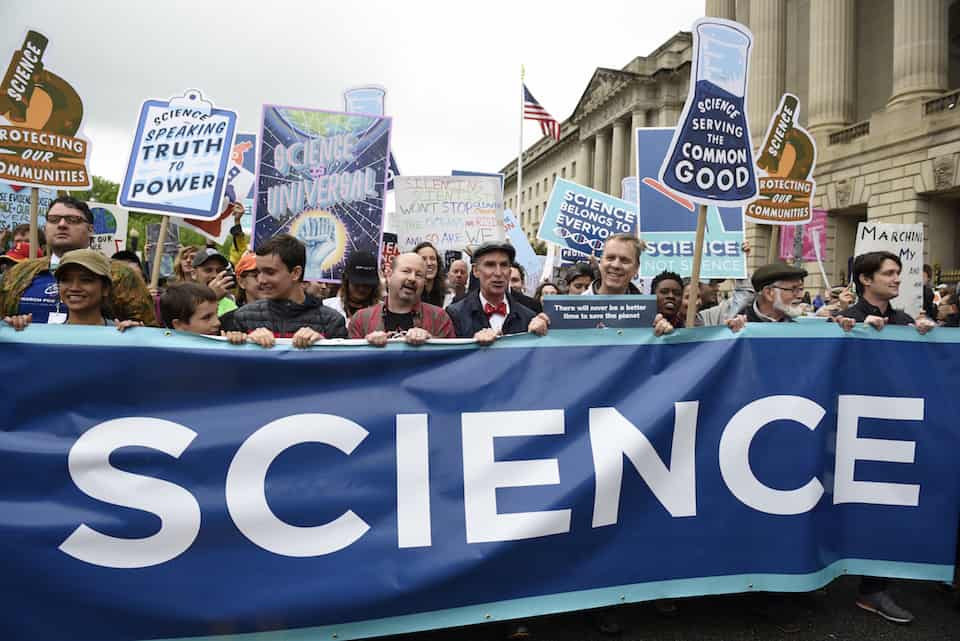 The world rose in resistance, and in support of science, this Earth Day, while Donald Trump issued an statement that openly promoted the weakening of regulations that protect citizens from pollution and global climate change.

On this Earth Day, thousands of people around the world decided to March for Science, mainly in reaction to the anti-science policies and political positions championed by Republicans, and embodied by the Donald Trump administration. The marchers drew heavy attention from the media, much of it for their awesome and nerd-tastic signs.

Meanwhile, Donald Trump broke with President Obama's eight-year tradition of issuing Presidential Earth Day Proclamations, instead putting out a demonstrably un-presidential statement in which he paid lip service to the environment, while openly promoting its destruction (emphasis added):

Economic growth enhances environmental protection. We can and must protect our environment without harming America’s working families. That is why my Administration is reducing unnecessary burdens on American workers and American companies, while being mindful that our actions must also protect the environment.

Since taking office, Trump has already demonstrated his idea of "rigorous science," nominating cabinet officials (including an Environmental Protection Agency chief) who deny climate science, are ignorant of educational science, and ignore medical science. He has shown his commitment to the environment by proposing a budget that guts the EPA and scientific research, by gutting the Clean Power Plan, and by signing a law allowing coal companies to pollute the water.

And marching for science is not just about climate change and the environment. Ignorance and denial of science imbues every facet of Republican governance, from their anti-choice TRAP laws and crusade against Planned Parenthood, to their attempt to destroy health care for millions of Americans, to their embrace of failed drug policies, to Trump's Supreme Court nominee's ignorance about the disabled, and right down to Trump's own deeply offensive Autism Awareness statement.

As the world rises up to resist Trump this Earth Day, even as Trump continues his anti-science governance, there is at least one ray of hope to be found in the one scientific fact that Trump and the Republicans cannot deny, no matter how hard they try: The force of political gravity.