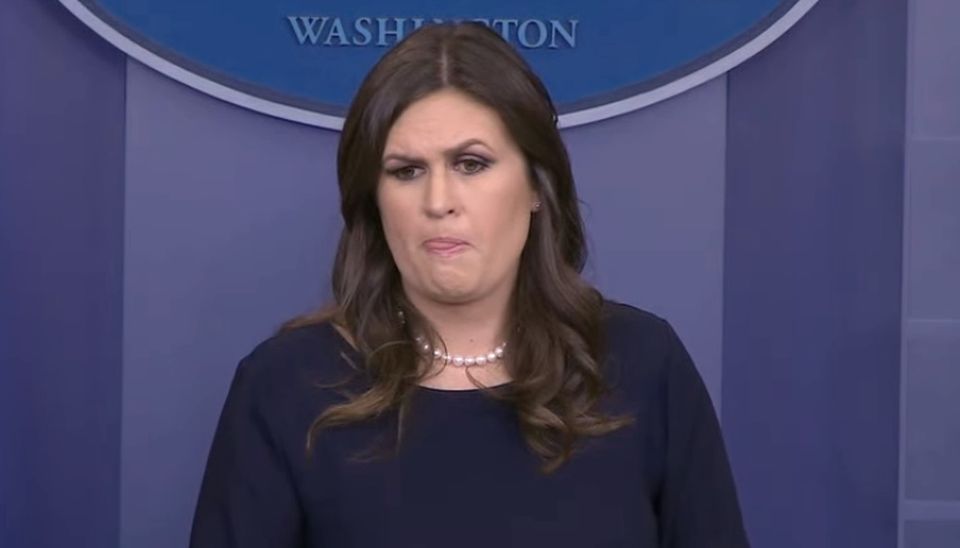 The White House continued to deflect from Trump's neglect of dead soldiers, arguing that bureaucracy prevented him from acknowledging their deaths. This was a lie.

The White House continues to blame everything and everyone, except Donald Trump, for the president's neglect of dead soldiers for nearly two weeks. The latest excuse is bureaucracy.

Asked at the daily press briefing why Trump took over 12 days to acknowledge the deaths of the four soldiers killed in Niger, press secretary Sarah Huckabee Sanders blamed the bureaucratic process.

Returning to the White House version of "the dog ate my homework," Sanders recited the entire procedure for how the names of the fallen are delivered to the office of the president. But whether Sanders was accurate or not — the administration lies so often, they cannot receive the benefit of the doubt — that was a dodge.

REPORTER: Why did the president wait 12 days to speak publicly about the casualties—

SANDERS: As I said, I walked you through that process, so the DOD package that was sent to the White House arrived on Thursday of last week, the White House military office confirmed the contents of that package on Monday and the letters have been drafted over the weekend. They were sent once that confirmation was completed, and calls were scheduled on Monday to be made on Tuesday.

REPORTER: But I wasn't just asking families, I was asking about why he didn't make public remarks.

[Sanders ignores reporter, moves on to next question]

The soldiers were killed in an ISIS ambush on Oct 4. Trump was told about their deaths that night, when he traveled on Air Force One on his way back to Washington after speaking in Las Vegas. He knew full well about these deaths long before he said a word.

And regardless of process, Trump has never failed to immediately comment, usually on Twitter, when a tragedy suits his narrative, even before he has information about it.

But not this time. Trump was busy golfing and feuding with the NFL and botching the recovery effort in Puerto Rico in the time during which he would not say a thing about the four soldiers. When he did finally do his job, he insulted Myeshia Johnson, the widow of Sgt. La David Johnson, and told her he "knew what he was signing up for."

Trump did not even say the sergeant's name during the phone call. His widow reportedly said he seemed not to know it.

The knee-jerk Trump behavior in these cases is time and time again to deflect, deflect, deflect. That was why Trump lied and said that President Barack Obama and former President George W. Bush neglected to call families of the fallen, and it is why he continues to deny what multiple witnesses report he said in the call with the Johnson family.

Trump has been caught in yet another act of cruelty and disrespect toward the military, behavior that has been a hallmark of his life and one reason why so many Americans — a plurality — rejected him as commander in chief.

His actions are showing why so many felt he had disqualified himself for the job, and his team's defensiveness and dishonesty while defending him are right in line with his neglect of duty.