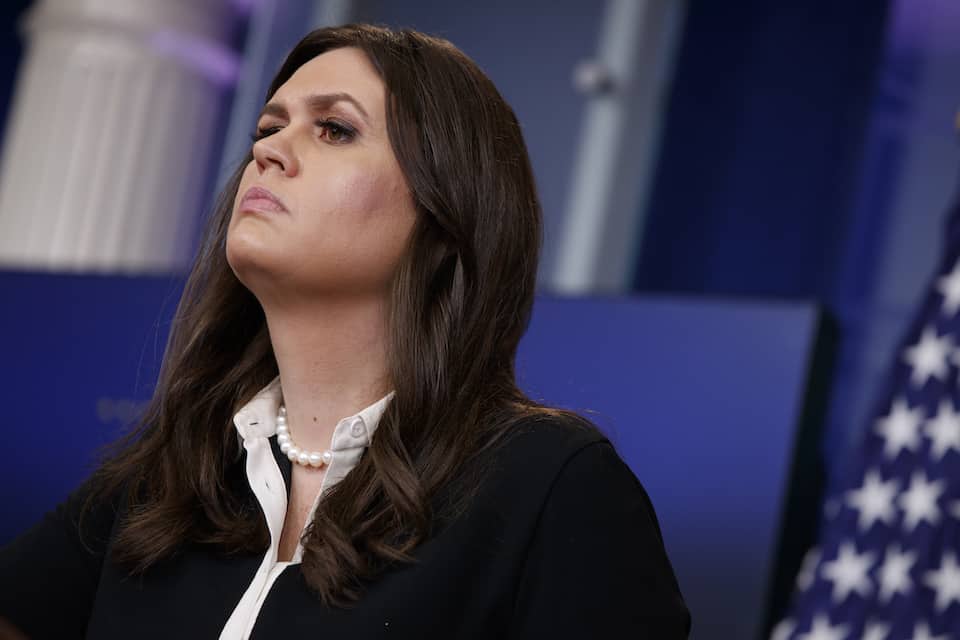 The Trump White House is orchestrating a smear campaign against President Barack Obama to distract from Trump's deplorable treatment of the families of soldiers killed in Niger.

Donald Trump has disgraced himself by refusing to acknowledge the deaths of four troops killed in an ISIS ambush — and the White House has kicked into high gear to cover his behavior.

The administration is orchestrating a smear campaign against President Barack Obama to cover up Trump's callous treatment of the families of four fallen soldiers. The episode is the latest skirmish in Trump's decades-long war on the military, in which he has attacked and denigrated service members and their families.

Trump has not called the families of four soldiers who were killed in action in Niger two weeks ago. To try to justify his lack of respect, he falsely alleged in a press conference that other presidents — including Obama — neglected to contact the families of the fallen. Previously, Trump refused to acknowledge sailors who were missing and later declared dead, instead, he constantly referenced himself in a narcissistic speech in Arizona.

White House press secretary Sarah Huckabee Sanders has been identified as the administration figure who is pushing and confirming Trump's attack on Obama, where he claimed Obama did not call the families of fallen soldiers.

Sanders has peddled the smear to multiple media outlets, including Fox News, Axios, ABC, and NBC. The Daily Beast reported that "senior White House officials signed off on this specific line of attack as legitimate communications strategy," but did not want their names attached to the smear campaign.

Trump recently used the death of Marine Lt. Robert M. Kelly, son of White House chief of staff John Kelly, to deflect from the criticism he has received. He told a Fox News host, "I mean you could ask Gen. Kelly, did he get a call from Obama?"

The Obamas hosted the general and his wife, Karen, at a White House reception for Gold Star families and were seated at first lady Michelle Obama's table.

When Kelly appeared before a gathering of the Military Officers Association of America, he told them, "Please don't mention my son."

Now Trump is openly disrespecting that request to exploit Kelly's loss for cheap shots at Obama.

Trump has often attacked, demeaned, and belittled those who have served. His behavior, along with his other failures in office, has contributed to a sense among many in the military that Trump is "unfit to be the president of the United States," according to reporting from Carl Bernstein, who broke the Watergate case.

Trump received five deferments during the Vietnam War, and did not serve. His physician cited "bone spurs," which did not appear years later in the report issued by his doctor while he was running for president.

When a veteran discussed his service with Trump early in the 2016 campaign, Trump told the man he was responsible for the Vietnam Veterans Memorial in New York.

But members of the commission to build that memorial said Trump never attended meetings except for quick photo ops. When that criticism came out, Trump attacked the members as "very small thinkers," adding, "They're stockbrokers that were in Vietnam and they don't have it."

Trump once said avoiding STDs while he was on the dating scene was his "personal Vietnam."

He infamously attacked Sen. John McCain (R-AZ), denigrating McCain's time as a prisoner of war in Vietnam, and declaring, "I like people who weren't captured."

He repeatedly and viciously attacked the family of a slain American soldier, smearing and denigrating Khizr and Ghazala Khan, after they spoke out about his bigoted attacks on Muslims.

As he campaigned for the presidency, Trump insisted he knew more than the generals in the field leading the fight against ISIS. He said, " I know more about ISIS than the generals do, believe me." He also said the generals "don't know much because they're not winning."

The White House-directed smear campaign comes almost precisely a week after Trump laughed and joked during a solemn military ceremony honoring the flag and those who have died to defend it — while at a military base.

His actions show that Trump is more than willing to denigrate and belittle the military to shield himself from criticism and condemnation he earned on his own.