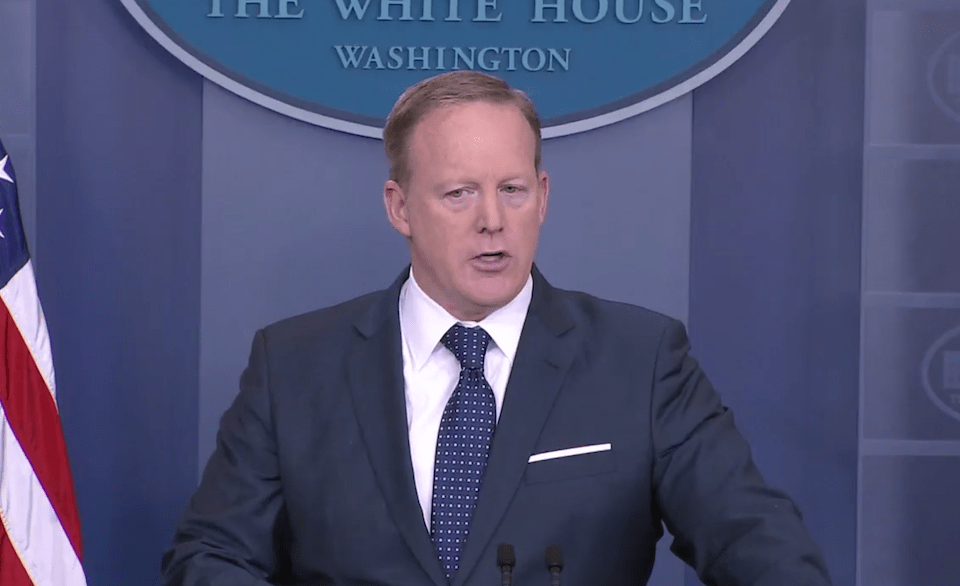 Republican politicians' unabashed violence and insults in May were followed by a string of race-based terror attacks, one of which ended in murder. The White House's response? Next question.

It's a safe bet that Trump's deputy press secretary, Sarah Huckabee Sanders, filling in on Monday for Sean Spicer, might have more to say about the attack in London during her Monday press briefing. But will she have anything more to offer about the attack here at home?

At Friday's White House press briefing, April Ryan, the intrepid White House correspondent for American Urban Radio Networks, asked about the White House's silence on the attack in which two men were murdered, and a third seriously injured, after they came to the aid of two young Black women wearing hijabs who were being terrorized on a train by a white supremacist.

Ryan confronted White House press secretary Sean Spicer, calling out the administration's inaction regarding the most recent string of hate crimes, which the White House has largely chosen to ignore.

Spicer's response to Ryan's reminders of these deadly, terrorist threats from within was short, defensive, and dismissive of the point:

RYAN: There are a number of reports on hate crimes. Nooses have been found at the museum — the museum that the president toured, the African-American History and Cultural Museum. And also, there was a very negative word, one of the worst words you can say, spray painted on LeBron James' home. What is the president saying about this? Specifically, as people are saying, over the last 130+ days, people are feeling that there has been a divide that is perpetuated from this White House.

SPICER: Well, I would respectfully disagree with the premise of that. I think we need to denounce hate in any form and any act, and this president made it clear from election night to his inauguration that he wants to unite this country and move it forward. (Calls on another reporter)

In response to the real, not rhetorical, blood on his hands, the president's spokesman gave a glib response lacking in any substance whatsoever.

He did not address the problem or show even a modicum of respect to the memory of those brave young men who lost their lives defending not only their fellow Americans who faced terrorist threats from other Americans, but who also defended one of the fundamental founding principles of our country that "all men are created equal."

The deadly attack in Portland is part of a disturbing pattern of violence and hate crimes that have risen under Trump's administration, and about which Trump's White House — not to mention his fellow Republicans — have had little to say.

In fact, Republican politicians' own recent behavior has continually sunk to new lows, including bragging about shooting reporters and even physically attacking a journalist.

As I noted previously, "Offensive words and behavior [have] become so prevalent among the GOP, that it is now their 'new normal,'" with Trump serving as offender in chief, inspiring out national ugliness.

And alongside these crude and dangerous acts by members of the GOP has come an odious bounty of violence and hate crimes.

Windows were shattered by gunfire at the offices of a prominent Kentucky newspaper, the Lexington Herald-Leader. Nooses were strung up at the Smithsonian's Museum of African American History and Culture — in an exhibition on segregation — and Hirshorn Museum on the National Mall.

The "n-word" was spray-painted on the Los Angeles home of NBA superstar LeBron James. The Japanese winner of this year's Indy 500, Takuma Sato, faced a barrage of online racist attacks, including by a reporter from the Denver Post.

Trump's glorification of putting certain people in their place, justification of racial hatred, and silence on behalf of victims of hate crimes has emboldened white supremacists like the Portland attacker. Despite Trump's prolific Twitter commentary, and his brash comments on a cornucopia of real and imagined offenses, when it comes to matters of race-based domestic terrorism, in the rare incidents that he responds at all, his comments are always a day late and a dollar short.

A large percentage of Americans are targets of white supremacist-inspired terror by our fellow citizens, and we are afraid, even if we are not surprised.

But when will Trump lead the vast majority of "real Americans," rather than the regressive minority? If Spicer's performance is any indication, the answer to that question may very well be "no comment."