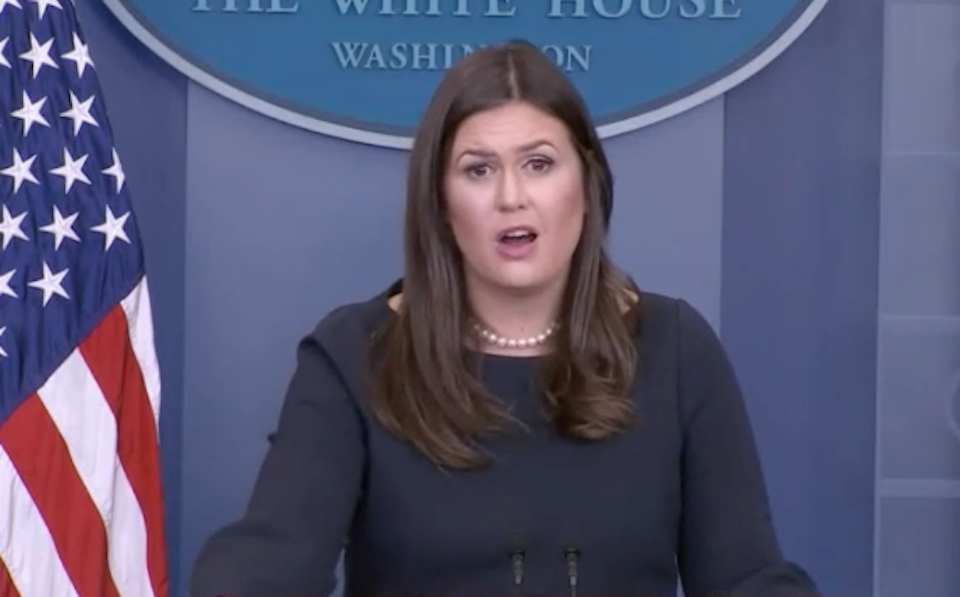 The Trump White House said NFL players should direct their protests at individual police officers instead of protesting during the national anthem, completely missing the point of their demonstration against systematic racism.

The Trump White House further insulted NFL stars who are protesting racism and police brutality by taking knee during the national anthem by questioning their real motivations and suggesting that they should instead direct their protests toward individual police officers.

White House press secretary Sarah Huckabee Sanders presided over yet another contentious press briefing Monday, offering up excuses for why Trump has spent so much time attacking the NFL and its players while life and death issues are being ignored.

Asked to explain why Trump accepts the word of white supremacists and their motives, but questions players like former quarterback Colin Kaepernick, who said his protest of the anthem was about the systematic practice of police brutality against black Americans, Sanders replied that if the debate "for them" is "really about police brutality," players "should probably protest the officers on the field that are protecting them instead of the American flag."

REPORTER: When Colin Kaepernick says that his protest is about fighting police brutality, fighting racial disparity, racial injustice, you're not taking him at his word. You're saying that the focus has long since moved on. But when white supremacists say that their protest is about heritage, not hate, the president does take them at their word. So why is there this disparity about who gets to decide what protest is about.

SANDERS: I think if this — the debate for them is really about police brutality, they should probably protest the officers on the field that are protecting them instead of the American flag.

Her comment was nonsensical. The players are not attacking the flag. They are using their elevated status and visibility to draw attention to an important issue that is affecting the lives of millions of citizens.

Asked later by another reporter whether she was actually calling on NFL players to protest police, Sanders struggled to defend her astonishing statement.

"No, no, that's not what I'm saying," she said. "I was kind of pointing out the hypocrisy of the fact that if the goal is, and the message is that of police brutality, which they've stated, then that doesn't seem very appropriate to protest the flag. I'm not sure how those two things would be combined."

I mean, ultimately, it’s to bring awareness and make people realize what’s really going on in this country. There are a lot of things that are going on that are unjust, people aren’t being held accountable for, and that’s something that needs to change.

That’s something that–this country stands for freedom, liberty, justice for all. And it’s not happening for all right now.

He went on to explain that he wasn't disrespecting the flag, but rather, looking for American institutions to live up to what the flag represents.

"When there’s significant change," he said, "and I feel like that flag represents what it’s supposed to represent in this country — is representing the way that it's supposed to — I'll stand."

Trump, his supporters, and his staff, including Sanders, are not interested in the true reasons motivating athletes and ordinary Americans in their protest. They just want them to shut up and fall in line with whatever Trump orders them to do. It isn't going to work.