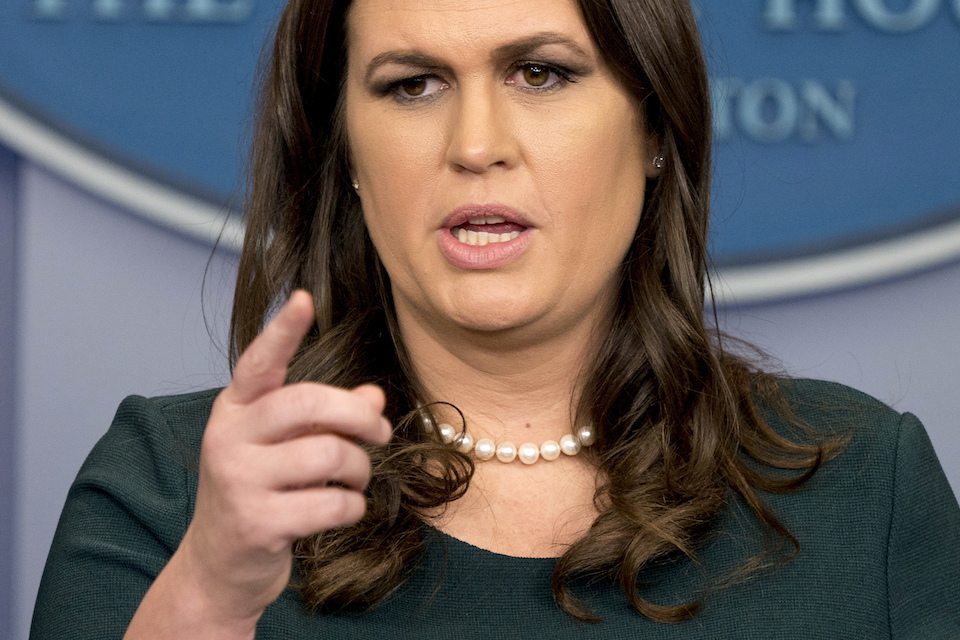 Trump's chief of staff viciously lied about Rep. Frederica Wilson — and there's tape to prove it. But the White House says it is OK because Kelly is a four-star general.

White House chief of staff John Kelly was caught in an ugly lie about a congresswoman. But instead of apologizing, the White House is defending him and saying it's "highly inappropriate" to call out his lie because he's a four-star general.

Press secretary Sarah Huckabee Sanders made the outrageous claim after a video proved that Kelly's attacks on Rep. Frederica Wilson were completely false.

Kelly claimed that Wilson bragged about securing money for an FBI building in Florida. Kelly said Wilson was an "empty barrel" who was "making the most noise" and insisted the crowd was "stunned" by her speech.

A video released by the South Florida Sun Sentinel proved that Kelly was lying, and that the story was an absolute fabrication.

Instead of apologizing to Wilson, Sanders doubled down Friday on the White House's fakery. Pressed by Chip Reid of CBS News, Sanders claimed that despite the indisputable visual and audio evidence, Kelly was still telling the truth and should not be questioned.

REID: Have you seen the speech?

SANDERS: She was also talking about —

REID: — for these FBI agents, who she then went on to effusively praise. And that was the bulk of the speech.

REID: Can you tell us specifically?

SANDERS: Exactly what he said. There was a lot of grandstanding. He was stunned that she had taken that opportunity to make it about herself.

REID: Will he come out and talk to us about this at some point?

REID: No, he was wrong yesterday, in talking about getting the money. The money was secured before she came to Congress.

The invocation of Kelly's service is a key element in the Trump White House strategy of hiding and cowering behind the authority of others. Kelly slandered Wilson on Trump's behalf, and the administration is now using his service as a shield.

That is what Trump has been doing throughout the process.

Four American servicemen were killed in Niger by ISIS forces. Trump would not publicly acknowledge them.

Immediately, Trump began throwing others in front of him and the controversy. He invoked both Presidents Barack Obama and George W. Bush and lied, claiming they did not contact the families of the fallen.

Then he invoked Lt. Robert M. Kelly, Kelly's son who was killed while serving. Trump ignored the fact that the Kellys were hosted at the White House by the Obamas, trying to imply that Obama ignored his suffering.

When he finally did speak to the Johnson family, in a call to Myeshia Johnson — widow of Sgt. La David Johnson — Trump said he "knew what he signed up for."

Trump lied about the content of the call — something Kelly inadvertently verified while smearing Wilson, who exposed the disturbing phone call.

The cycle of deceit continues. Trump smears everyone who questions him or points out his incessant lying. Cornered, he and his underlings invoke prestige and honor they have not earned, hoping to deflect from the rotten core of their administration.

When caught in a lie, Trump and his administration simply tell more lies and attack those who call them out for it.

To suggest that Kelly cannot be criticized, let alone called out for lying, because of his military service is absurd. It's also not a rule Trump himself has followed.

He had no problem publicly attacking Gen. John Allen when he spoke at the 2016 Democratic convention and said Trump should not serve as president.

Kelly lied, while so far the evidence shows Allen was right.

Trump cannot change, because this is who he is. What he touches becomes tainted with dishonesty, like everybody around him.