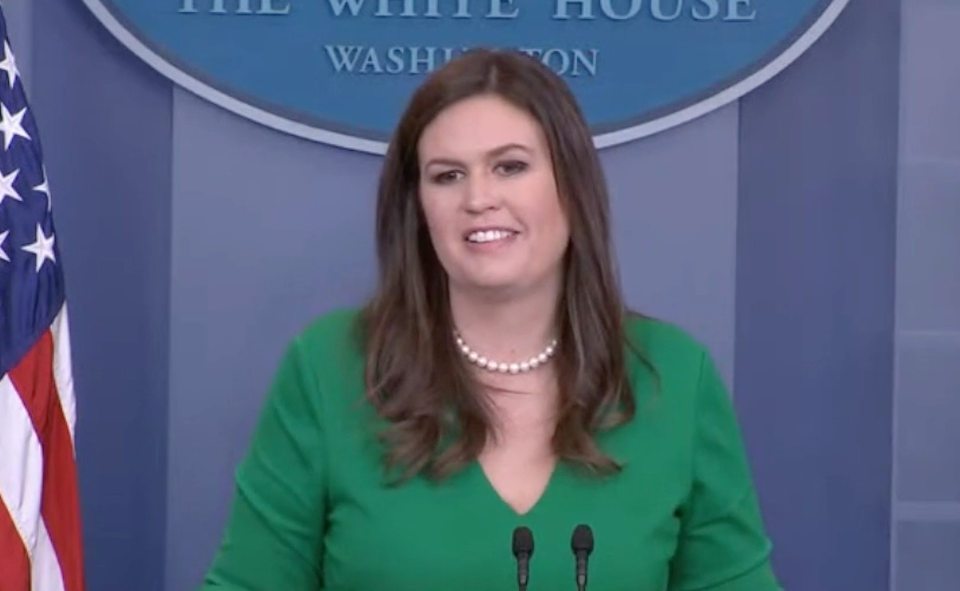 White House press secretary Sarah Huckabee Sanders laughed at the idea that Congress should do anything to prevent mass shootings, and insisted the topic of gun safety should not come up on the same day of a massacre.

The Trump administration has literally laughed off concerns about working on gun safety legislation after the massacre in Las Vegas.

During the daily White House press briefing, NBC reporter Hallie Jackson asked press secretary Sarah Huckabee Sanders to respond to Sen. Chris Murphy (D-CT), who called for Congress to "get off its ass and do something" about gun violence.

Sanders then smiled and laughed from behind her podium, mockingly saying, "I agree with him that Congress should get up and do something," adding that she didn't believe that action should "be specific" to gun safety. She then reiterated her comments made earlier in the briefing insisting that more time needs to pass before Trump and Republicans will address gun violence.

JACKSON: You talked about how now is not the time to get into a gun control debate or to talk about policy. After the Orlando shooting, the president that day was out on Twitter talking about policy. He was talking about his travel ban. So when, for example, Sen. Chris Murphy says it's time for Congress to "get off its ass" and do something, does the president agree?

SANDERS: I actually agree with that Congress should get up and do something. I'm not sure that it's specific to that. But I think Congress has had several months of doing very little, and we'd like to see some actual legislation come through.

JACKSON: What would the president like to see Congress do?

SANDERS: Again, we haven't had the moment to have a deep dive on the policy part of that. We've been focused on the fact that we had a severe tragedy in our country. And this is a day of mourning, a time of bringing our country together. That's been the focus of the administration this morning.

JACKSON: But Sarah, at that day, he was talking about the travel ban, saying he didn't want congratulations, essentially.

SANDERS: There's a difference between being a candidate and being a president.

Sanders' excuse for Trump's behavior — that "there's a difference between being a candidate and being a president" — makes no sense. Trump has invoked impulsive and inflammatory language in reaction to other tragic events while occupying the presidency, as he called for his Muslim ban to be enacted when terrorists attacked London.

But his approach to gun violence remains as callous as ever. Trump refused to bring up guns during his address to the nation Monday, and Sanders' defense that he hasn't had time to do a "deep dive" on policy is also nonsense.

In 2015, after nine people were killed at Umpqua Community College in Oregon, Trump said, " You're going to have these things happen," and told journalists he saw no way to prevent mass shootings because there are "millions and millions of sick people all over the world."

Trump has had two years to consider gun policy but has clearly given it no thought. Now, on a day when at least 58 Americans have lost their lives, the White House defense is that now is not the time to think about it.

Trump, like his allies and backers in the NRA, do not want the topic of guns associated with mass shootings, but it is impossible to separate the two.

The wide availability of guns contributes to America's bloody legacy of mass killing, and the refusal of NRA-backed politicians to address the issue — often begging off discussion until some vague, nebulous point in the future as the mainstream press lets them off the hook — makes the country a deadlier place to live.

And it isn't a laughing matter.