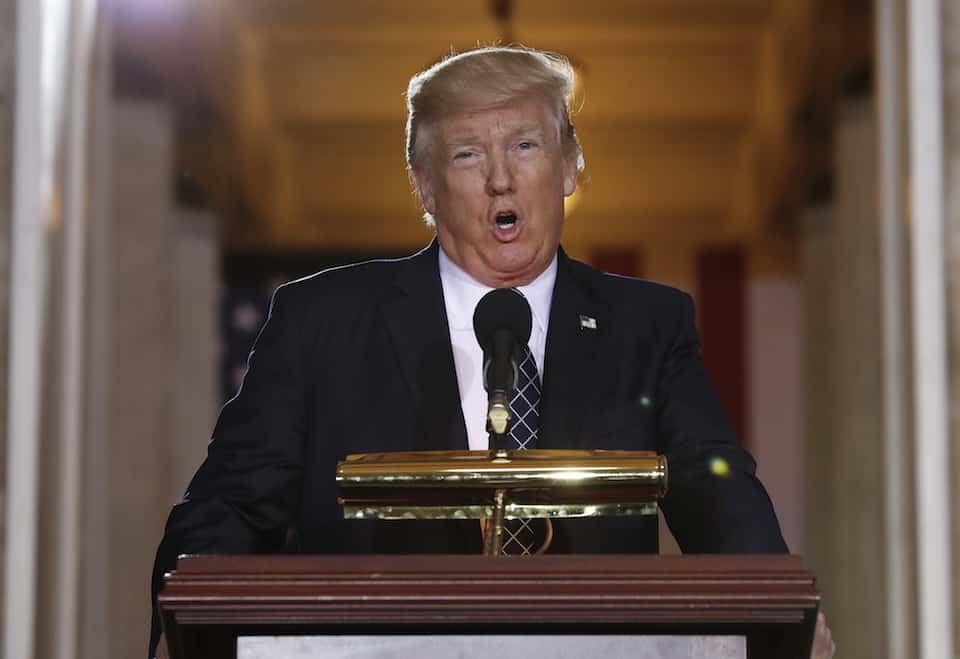 The Trump administration's unusual step of inviting the entire Senate to the White House for a security briefing on North Korea, in addition to Donald Trump's recent heated rhetoric, suggests he might be preparing for military action — a dangerous and terrifying scenario this ill-tempered and ignorant president is most certainly not capable of handling.

Donald Trump has engaged in a great deal of "saber-rattling" about North Korea, including his claim of "sending an armada" to the region, but his administration's recent actions suggest they could be preparing for much more than tough talk.

The Trump administration took the highly unusual step of inviting the entire U.S. Senate to the White House on Wednesday for a national security briefing by Secretary of State Rex Tillerson, with Mattis, Dunford, and Director of National Intelligence Dan Coats also in attendance. The State Department also announced that Tillerson will chair a special ministerial meeting of the United Nations Security Council about North Korea on Friday.

Trump's young presidency is already in trouble, with record low approval ratings, multiple investigations into his campaign's possible collusion with Russia, and an inability to enact any significant legislation, despite GOP control of both the House and Senate.

For a president desperate to prove his first 100 days are not a total failure, engaging in military action against North Korea, which poses an actual, though not imminent, threat to U.S. national security, could be the opportunity he is seeking to show his strength as a leader.

Trump began tweeting about North Korea's nuclear weapon program back in January. His tweets on the subject increased in frequency starting in early April and eventually escalated to include threats of unilateral U.S. action.

I think that North Korea's been playing games from the very beginning. ... And what we've said is we don't want war, so don't start one. ...

In response to questions during these appearances, Haley repeatedly refused to rule out U.S. military strikes.

Also on Monday, Trump had an unusually rigorous schedule focused on national security, with multiple meetings to discuss North Korea. He had lunch with U.N. ambassadors from the nations that comprise the Security Council, where he urged immediate action, saying, "North Korea's a big world problem, and ... now it's time to solve the problem." He also convened privately with Defense Secretary Jim Mattis and Joint Chiefs of Staff chair General Joseph Dunford, and that evening, he dined with Republican Senators John McCain and Lindsey Graham, both of whom are members of the Senate Armed Services Committee.

The White House's actions have not gone unnoticed by national intelligence and security expert Malcolm Nance, who questioned whether the White House might not only be briefing the Senate on Wednesday, but also asking for "war powers":

#BREAKING This unprecedented briefing on NK is a grave indicator of poss imminent action by US. Will Trump ask for war powers to attack? https://t.co/G1cotU8sDi

Nance further theorized the Trump administration's communication with the U.N. Security Council could allow the White House to claim they attempted to use diplomatic avenues before moving to military ones:

Intelligence indicators are piling up. This is a pathway to claim to have given diplomatic chance for NK. GW Bush was much less obvious. https://t.co/1ZlPY30O1J

Earlier this month, in response to Trump's unilateral decision to use military force in Syria and Afghanistan and reports that he was considering a pre-emptive strike against North Korea, Democratic House Minority Leader Nancy Pelosi issued a statement demanding that Speaker Paul Ryan initiate classified discussions about Trump's use of force. Her effort was an attempt to leverage Congress' constitutional war-related powers to hold Trump's executive branch accountable. Unsurprisingly, however, Ryan scheduled no such meetings.

What is perhaps most concerning about the possibility that the Trump administration could be preparing for military action against North Korea is Trump's failure to demonstrate any understanding whatsoever of the consequences of military action, and specifically, the use of nuclear weapons.

During the presidential campaign, Trump presented conflicting views of nuclear weapon use, and his administration's policy on nuclear weapon use is also uncertain. In December, Trump indicated a willingness to engage in a new nuclear arms race with Russia, saying during an appearance on MSNBC, "Let it be an arms race. We will outmatch them at every pass and outlast them all."

During his campaign, Trump refused to say he would not use nuclear weapons. He also showed a lack of understanding about the difference between nuclear weapons and conventional munitions, and he indicated that he was not familiar with the concepts of deterrence and disarmament. In fact, during an hour-long national security briefing in 2016, Trump repeatedly asked, "If we have nuclear weapons, why can't we use them?"

#MorningJoe- In a 1 hour military briefing Trump asked 3 times "If we have nukes why can't we use them?" https://t.co/XIaCLWsdGv

SCARBOROUGH: What concerns you most about Donald Trump?

HAYDEN: How erratic he is, Joe. I can argue about this position or that position. I do that with the current president, but he [Trump] is inconsistent. And when you're the head of a global superpower — inconsistency, unpredictability, those are dangerous things. They frighten your friends, and they tempt your enemies. So I would be very, very concerned.

FORD: General Hayden, Harold Ford, very very quickly: Who amongst your peers that you respect greatly — whether they think like you or don't think like you — do you know that's advising Mr. Trump.

[Stunned utterances and looks from other panel members.]

SCARBOROUGH: I have to follow up with that, but, then, I'll be very careful here. Several months ago, a foreign policy expert — on an international level — went to advise Donald Trump, and three times he [Trump] asked about the use of nuclear weapons. Three times he asked. At one point, "If we have them, why can't we use them?" That's one of the reasons why he just doesn't have foreign policy experts around him.

[Stunned utterances and looks from other panel members.]

Three times in an hour briefing: "Why can't we use nuclear weapons?"

BRZEZINSKI: Be careful, America, and be careful, Republican leaders. Your (unintelligible) is blowing up.

SCARBOROUGH: So, General Hayden, I want to ask, one more time, and it may be classified, but, the steps. Donald Trump decides to use a nuclear weapon. What is the time frame between his decision and when the nuclear weapons are launched?

HAYDEN: Joe, it's scenario dependent, but the system is designed for speed and decisiveness. It's not designed to debate the decision.

With a cabinet full of generals, a decimated State Department, GOP control of both the House and the Senate, and a Republican Party unwilling to hold the Republican president accountable to any laws or norms, the reality is Trump has unchecked power when it comes to military action, including use of nuclear weapons.

Trump's unpopularity, the ongoing questions about his election, and his demonstrated ignorance about a range of critical and complicated issues — from geopolitics to nuclear weapons — all add up to a dangerous situation with North Korea in which Trump is clearly in over his head and lacks the knowledge, experience, and sober advice to handle it.