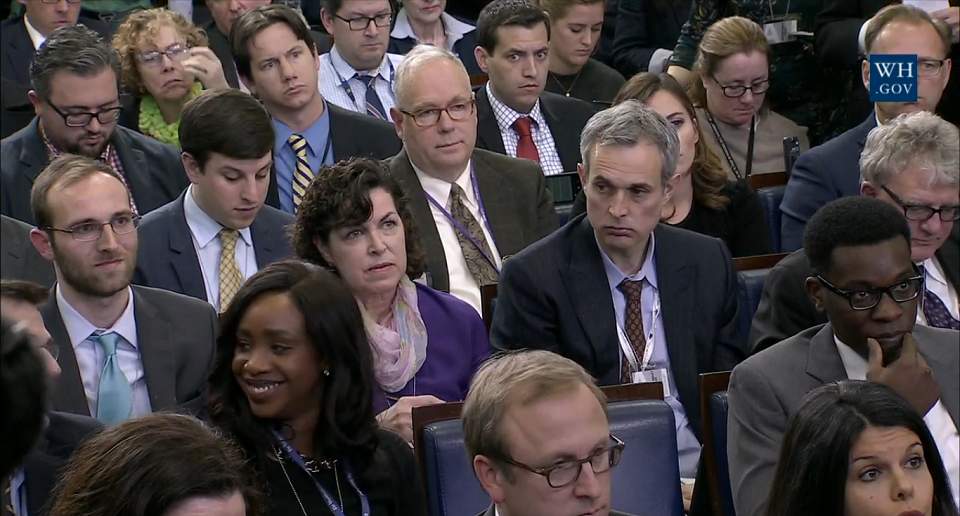 After nearly two months covering the Trump White House, very few reporters have stood up to Press Secretary Sean Spicer's bullying of journalists, and those who have are discovering that solidarity is in short supply.

Donald Trump set the tone for his administration by attacking a reporter during his first press conference as president-elect, and White House Press Secretary Sean Spicer has embodied Trump's bullying of the free press so effectively that he has become a hit Saturday Night Live character. Spicer's first appearance in the briefing room literally consisted of him screaming at reporters about what assignments they should be covering.

And at a televised press briefing this week, one reporter stood up to Spicer, and was laughed at by her colleagues for her trouble.

Following an ice-cold session with Trump budget director Mick Mulvaney, Spicer attempted to deflect questions about Trump's wiretapping lie by citing media reports that did nothing at all to support the claim. In particular, he cited The New York Times on ten separate occasions (full transcript here):

In an attempt to allow the paper to respond to Spicer's lies, RealClearPolitics correspondent Alexis Simendinger asked Spicer to call on NYT correspondent Peter Baker.

The reaction she got from Spicer was expected, if disrespectful. But the reaction of Simendinger's colleagues was shocking:

SIMENDINGER: Sean, I’d like to ask you about two topics, but can you help us a little by calling on Peter right now?

SIMENDINGER: Call — call on the —

SPICER: I understand. I actually call the questions. Alexis, if you don’t want to answer the question I can call on somebody else.

SIMENDINGER: Could you call on the New York Times, please?

SPICER: No, thank you. Gabi.

It is important to understand that Alexis Simendinger is not an ordinary White House reporter — she has been a correspondent through four administrations, and is a highly-respected journalist who was equally forceful with the Obama administration in advocating for fairness and access. This was not a partisan move; this was Simendinger acting as the conscience of that press corps, in courageous fashion.

For her colleagues to abandon her and allow Spicer to avoid tough questioning by The New York Times is a failure of journalistic solidarity, but to laugh at her effort was disgraceful.

This is a disturbing pattern from members of the White House beat, which I covered for six years. No one spoke up for Jim Acosta when Trump attacked him and refused to allow him to respond, or for the Jewish reporter whom Trump attacked at another press conference. When Trump called the press the "enemy of the American people" and canceled his appearance at the White House Correspondents' Association Dinner, the association responded by praising the administration and re-inviting him.

When one reporter stood up to Spicer last month by yielding her question to another reporter who was being bullied, no one followed suit, and all she got was a missed question.

Thus far, standing up to this White House has had to be its own reward, and if this press corps continues to fail their own colleagues in this fashion, there will be even fewer who are willing to do it. There is nothing funny about any of this.