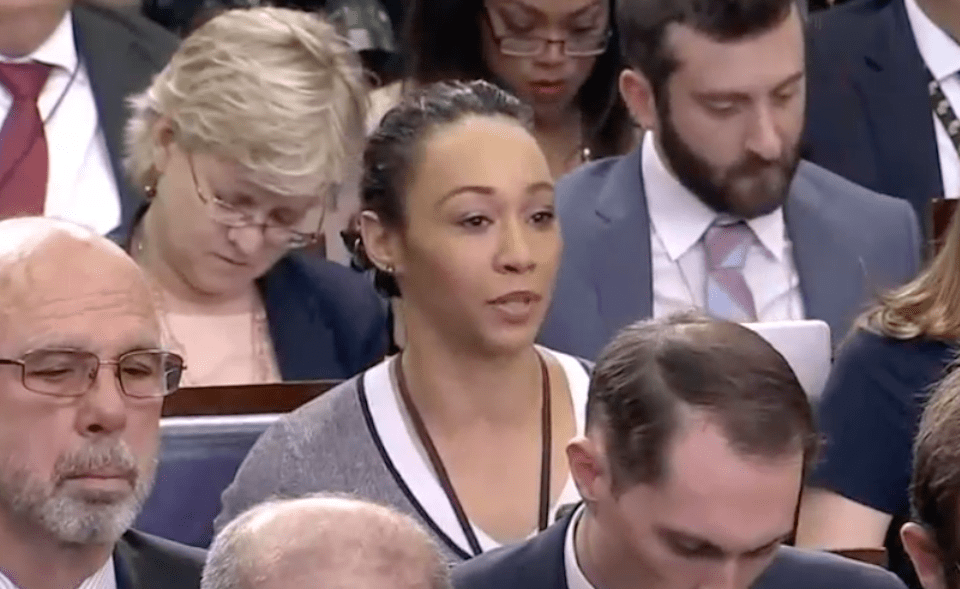 During a White House press briefing, Daily Mail correspondent Francesca Chambers challenged Sean Spicer over the hypocrisy from Donald Trump and his surrogates regarding anonymous sources and government leaks.

As part of his effort to delegitimize the press, Donald Trump has a long history of railing against the news media's use of anonymous sources and leaks from within government — but only if the resulting reports are critical of him, his family, or his administration.

He praises Fox News propaganda that supports his agenda (including when it relies on unnamed sources) and has even given White House press passes to extremist right-wing organizations, such as InfoWars, that traffic in conspiracy theories about Democrats.

But when the Washington Post published a bombshell report, citing multiple U.S. officials, about Trump's son-in-law and senior adviser, Jared Kushner, discussing the highly troubling possibility of a secret communications channel with Russia, Trump was livid.

Two days after the article was published, Trump lashed out on Twitter against the use of such unnamed sources and government leaks, and continued with his "fake news" narrative:

It is my opinion that many of the leaks coming out of the White House are fabricated lies made up by the #FakeNews media.

It is my opinion that many of the leaks coming out of the White House are fabricated lies made up by the #FakeNews media.

....it is very possible that those sources don't exist but are made up by fake news writers. #FakeNews is the enemy!

But two days after that, Trump retweeted an anonymously single-sourced Fox News story that pushed back on the Post's reporting to his millions of followers: Moreover, in contrast to the fully attributed Post article, the Fox article had no byline other than "Fox News."

But rather than answering her question, Spicer ended up spouting non-sensical, unrelated material and then moving on to another reporter:

CHAMBERS: Thank you, Sean. But the president retweeted, this morning, an article about that backchannel that was based on an anonymous source that said that there was an effort to set up a backchannel, that it was the Russians who suggested that, and that it was to talk about Syria. Was the president not confirming that that effort — that there was an effort in the facts that I just said?

SPICER: I think what I just said speaks for itself.

CHAMBERS: But he was — but you said that, first of all, that the article was based on anonymous sources.

SPICER: Which it is.

CHAMBERS: But the Fox article that the president retweeted was also based on anonymous sources. Why are those sources — or the source, rather — that they used more credible than the ones in the Washington Post article?

SPICER: Again, I don't think — there's two issues at hand. One is the statement that Jared's attorney has provided. The second is, is whether or not the backchannel — the dossier that was largely the basis for this was largely discredited in the first place. Most of the publications here refused to publish it in the first place. So, again, I'm not going to get into confirming stuff. There's an ongoing investigation. John?

In direct contrast to both Spicer's and Trump's attacks on the mainstream news media for using anonymous sourcing, in this case — when the article in question supports a version of reality of which he and his approve — Spicer appears to think such methods are legitimate.

It might be tempting to think Trump's activity on Twitter doesn't matter, but Trump and his strategists understand the powerful role social media now plays in shaping public perception. Through this medium, Trump can disperse a version of reality he wants people to believe — while attacking all others, and as Spicer does the same on Trump's behalf during press briefings.

Authoritarian-minded leaders throughout history have used these kind of tactics to control the public's access to and understanding of information — and to ultimately control what is viewed as the truth.

While he resides in the Oval Office, Trump will remain one of the most powerful men in the world, as he positions himself as Propagandist-in-Chief. It is up to both the American people to educate ourselves about such tactics and journalists like Chambers to call out Trump and his surrogates for their deceptions, manipulations, and hypocrisy.