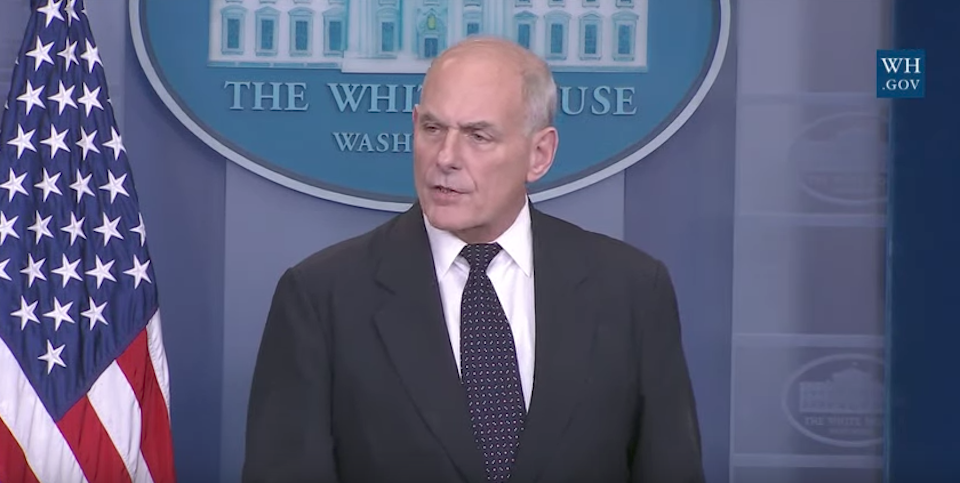 The White House smear campaign against a congresswoman who is simply trying to support a grieving Gold Star family she has known for decades has grown even uglier.

The desperate White House campaign to defend Donald Trump's horrific treatment of a grieving family turned even more shocking and upsetting on Thursday.

Chief of staff John Kelly made a rare appearance at the daily White House press briefing to launch an extensive and vicious attack on Rep. Frederica Wilson, a long-time friend and mentor of the family of Sgt. La David T. Johnson, who was killed two weeks ago in an ISIS ambush in Niger.

While Trump ignored the deaths of Johnson and three other soldiers, Wilson has been comforting Myeshia Johnson, the sergeant's young pregnant widow, and the rest of the family. Wilson was with them when they went to meet his body at the airport. She was with them when Trump called and so callously told the widow that her husband had "signed up" to die.

When Trump dared to attack Wilson and call her a liar, insisting that he had proof he'd said no such thing, Johnson's mother — who has not even buried her son yet — spoke out to confirm that Wilson's accounting of the call was "very accurate."

Even that did not put an end to the ugly attacks on Wilson and on the members of the family who have called Trump's behavior insulting.

KELLY: I was stunned, when I came to work yesterday morning, and brokenhearted, at what I saw a member of Congress doing. A member of Congress who listened in on a phone call from the president of the United States to a young wife.

And in his way, tried to express that opinion: that he's a brave man, a fallen hero. He knew what he was getting himself into, because he enlisted, there's no reason to enlist, he enlisted. And he was where he wanted to be, exactly where he wanted to be with, with exactly the people he wanted to be with when his life was taken. That was the message. That was the message that was transmitted. It stuns me that a member of Congress would have listened in on that conversation. Absolutely stuns me. And I thought, at least that was sacred.

Kelly also described Wilson's involvement with the family as "selfish behavior" — a particularly stunning thing to say, given that Kelly is making these attacks to defend Trump's selfish behavior.

Trump has had two weeks to do the right thing. He had two weeks to say something — anything at all — about the troops killed in action. He did not. Even when he boasted to a coalition of hate groups that he was defeating ISIS, he said nothing about the four soldiers killed by ISIS the week before.

When he was pressed by the media to say something, Trump did not read the statement that had been prepared for him — a statement he scrapped. Instead, he insisted that he always calls every Gold Star family and that President Barack Obama and other predecessors never did. That was a lie.

When it was reported that the grieving family was insulted by Trump's call — he seemed to not even know Sgt. Johnson's name, according to his widow, and instead referred to him as "your guy" — Trump did not apologize. He did not publicly offer his condolences. Instead, he further lashed out at Wilson, who is now receiving death threats, thanks to the steady smear campaign from the White House and its right-wing media enablers.

Kelly had the audacity to attack Wilson for listening to Trump's phone call, giving no consideration to the family who wanted her with them in the first place. Kelly admitted that he also listened to the phone call but did not address why it was appropriate for him to do so.

It is a stunning turn of events from a general who buried his own son, killed in action in 2010 — a death Trump cynically invoked during a radio interview with Fox, in a further attempt to defend himself by attacking Obama.

On Wednesday, press secretary Sarah Huckabee Sanders called Wilson's fierce protection of this family, and her demand for answers about how Johnson died and why his body was left behind, "appalling and disgusting."

The attacks have only grown uglier. Trump's inability to express empathy and to appropriately fulfill his solemn duty as commander in chief is not only bringing disgrace to the office he holds but to everyone around him.