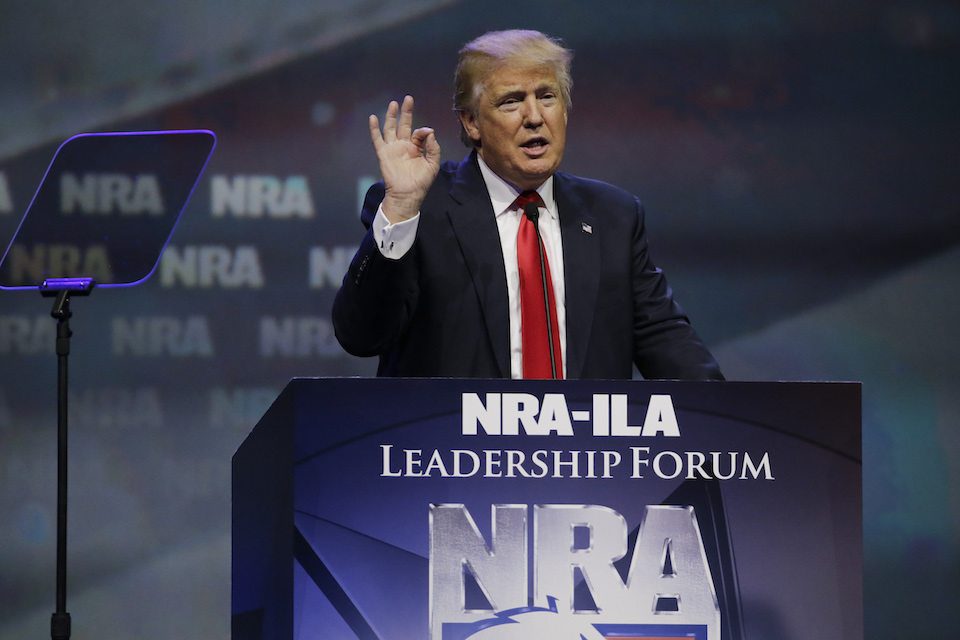 Despite Donald Trump's offer of "condolences," it seems the administration is unduly concerned with protecting the feelings of the National Rifle Association.

After the horrific mass shooting in Las Vegas Sunday night, Donald Trump again proved how incapable of real leadership he is.

His bizarre offering of "warmest condolences" followed by a statement that neglected to even mention gun safety put his all too predictable inadequacy as president on full display.

And just as predictably, his administration leapt to the defense of the National Rifle Association.

During a press briefing Monday afternoon, CBS Radio News White House correspondent Steven Portnoy asked press secretary Sarah Huckabee Sanders about a bill currently being advanced by House Republicans that would make it easier for people to buy silencers, and would remove background check requirements for purchasing them.

Portnoy cited a tweet from Hillary Clinton, in which she said, "Imagine the deaths if the shooter had a silencer, which the NRA wants to make easier to get," and asked if the White House had a position on the legislation.

Sanders' response was to glibly state that "we need to know more facts" before talking about prevention of similar tragedies.

And she sneered at Clinton, saying it's "very easy for [her] to criticize," and insisted that this "isn't a time for us to go after individuals or organizations."

Her vague reference to "organizations" is as transparent as it could be; after all, what other organization comes up in the aftermath of a mass shooting than the NRA?

Despite that group's cynical move to delay advertisements it had planned to run in support of Republican candidates in Virginia — a delay of a whole eight days — one thing the NRA is notorious for is the repugnant responses after all such tragedies in which it gleefully engages.

The NRA does not need nor deserve protection from criticism. Rather, it needs more than criticism; it needs to be reined in and made to observe laws and regulations that even the vast majority of its own members support.

But just as with Trump's heartless and empty responses to the massive natural disaster in Puerto Rico, his administration's answer after another mass shooting is to show little real empathy toward actual victims.