Home National White House tells Congress to 'get out of the way' if they're...
Support progressive journalism.
Donate today 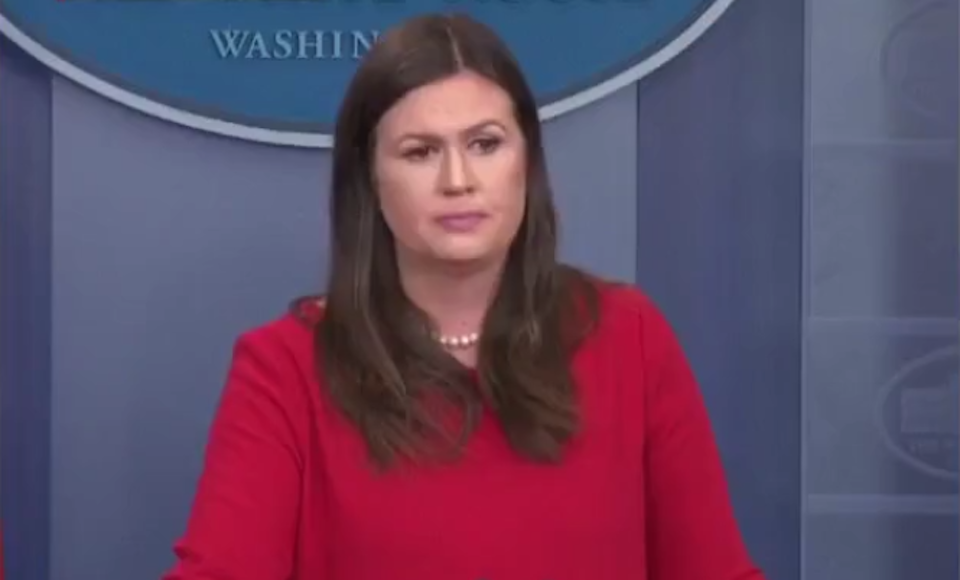 This White House never takes responsibility for anything, even its own cruel decisions.

On the same day that Donald Trump unnecessarily decided to end a program that protects immigrant children, his White House is already blaming Congress for not fixing it.

Trump started the day callousing teasing his plan on Twitter. Of course he didn't have the courage to make the announcement himself. Instead, he sent Attorney General Jeff Sessions out to face the camera and attempt to justify the horribly cruel policy reversal that will affect up to 800,000 young men and women — and their families.

During press secretary Sarah Huckabee Sanders' press briefing Tuesday afternoon, she insisted repeatedly that it is on Congress to clean up the mess Trump has made.

And if members of Congress will not fulfill Trump's agenda — which, to date, does nothing to help immigrant families but instead focuses on tougher deportation standards and a pointless, costly wall on the southern border — they should "get out of the way."

REPORTER: Sarah, you’re talking about a comprehensive immigration fix from Congress in a span of six months, and much to the president’s frustration, Congress hasn’t been able to really do much at all this year. What gives him confidence that they’re going to be able to act on immigration? Has he spoken to any Congressional leaders since making this DACA decision?

SANDERS: He’s spoken to a number of leaders, but hopefully — as you guys all know, they just came back from a three week vacation. I think that they should be rested and ready to take on some big challenges that America faces.

SANDERS: Because it’s Congress’ job to legislate. It’s not the president’s job to create law. It’s not — it’s Congress’ job to create legislation. I think that’s something we all learned in eighth grade civics. I know I certainly did. And I think that every member of Congress should know that that is their duty, and we’re asking them to fulfill it. It’s pretty simple.

REPORTER: Do you think that they’ll be able to do it?

SANDERS: I think that the American people elected them to do it. And again, if they can’t, then they should get out of the way and let somebody else take their job that can actually get something done.

Regardless of the White House's attempts to blame Congress for a decision Trump made, the blame for the fear and uncertainty that will now ensue, and the lives that will be ruined and families torn apart, rests squarely on Trump. Viciously targeting immigrants has been the central plank of his platform from the very first day he started his presidential campaign.

As Daily Beast reporter Betsy Woodruff noted, immigration enforcement can now use the information collected as part of the DACA program to target and deport those young men and women.

When Obama implemented DACA, he asked them to trust the country they knew as their home. And they did. Now, under Trump, their trust and faith in the United States government will be violated and used against them to punish them for the decisions their parents made to try to offer them a life of opportunity in America.

Sanders is right about one thing: Congress should act immediately. They need to fix the mess Trump has made, with legislation that will allow those young men and women to remain in the country that is their home. Because obviously, that's not something this heartless and hateful president cares about at all.