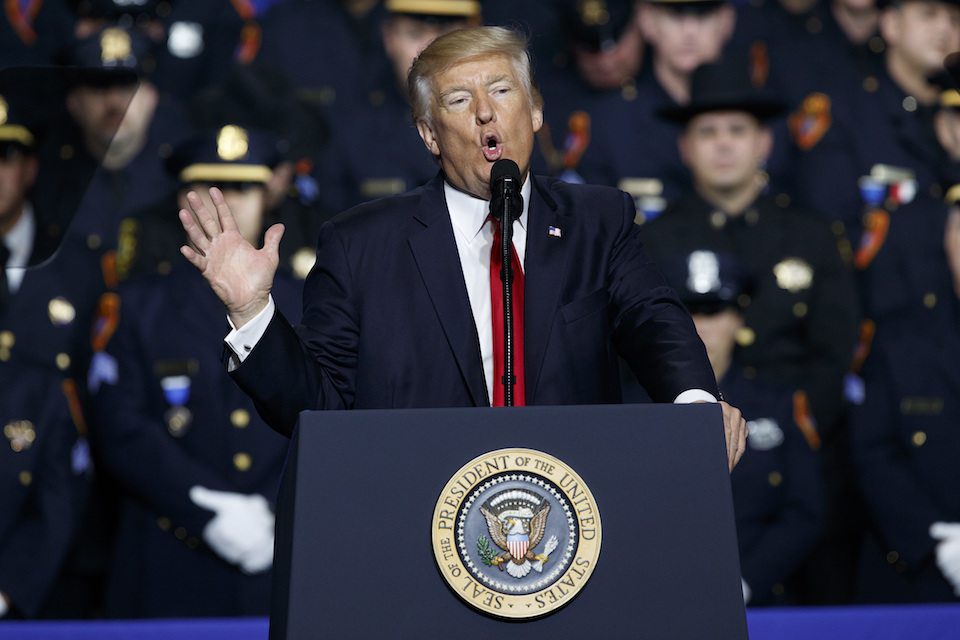 Donald Trump's defenders always try to excuse his most inappropriate rhetoric as nothing more than a "joke." It's still not funny.

When Donald Trump gave a speech to federal, state, and local law enforcement last week, encouraging them to be more physically forceful with suspects, he seemed deadly serious.

“When you see these thugs being thrown into the back of a paddy wagon, you just see them thrown in rough, I said, ‘Please don’t be too nice,'" Trump told the assembled crowd.

But now that he has been roundly and almost universally condemned for such an offensive and unpresidential suggestion — by police departments around the country, as well as the International Association of Chiefs of Police — the White House is claiming it was just a joke.

In Monday's briefing, press secretary Sarah Huckabee Sanders was asked about Trump's call for police brutality. As is almost always the go-to defense for Trump and his horribly offensive statements, Sanders brushed off Trump's comments, saying he "was making a joke."

REPORTER: The other thing I wanted to ask was, when the president made his speech to the police officers on Friday, almost within minutes, statements came from police chiefs across the country criticizing his remarks that seemed to endorse the use of force by police in certain arrests. Was the president joking when he said this? Or did he check his remarks out with the International Association of Police Chiefs, or maybe the attorney general?

SANDERS: I believe he was making a joke at the time.

The insistence that Trump's most inflammatory rhetoric is merely a joke — or should not be taken literally, or is merely "locker-room banter" — grew old and tiresome long before he took office.

Trump has a long and disturbing pattern of violent rhetoric, even before his campaign, when he gleefully talked about torturing suspects, and told his fans he wanted to punch protesters.

Even when he was nothing more than a reality TV star who regularly called in to "Fox & Friends," he celebrated police violence. His support for violence is so old that in 1989, he paid $85,000 to take out full-page ads calling for New York to reinstitute the death penalty.

Now the White House is asking Americans to believe Trump was just kidding around when he told a crowd of law enforcement the same message he has said countless times before. And that's the real joke.