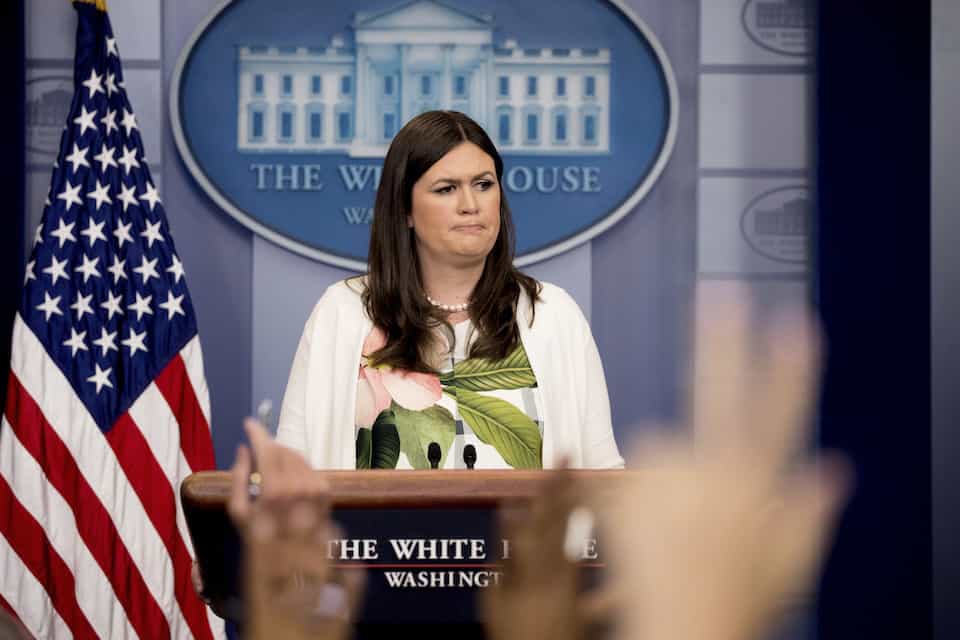 Despite the embarrassment, mockery, and negative repercussions it has often brought him, Donald Trump has not given up his love for Twitter since becoming president. And those who are charged with explaining and defending his behavior on the site have been reduced to absurd hypocrisy: Trump's tweets mean nothing, except when they say everything.

And his seeming inability to divest himself of his personal account, or at least to rein in his reckless use of it, has already become a dark hallmark of his presidency.

In the most recent early-morning tweet storm, Trump attacked his own Justice Department over his Muslim travel ban. These tweets came on the heels of his repugnant volley directed at London mayor Sadiq Khan after a terrorist attack in that city.

These instances are just the newest entries in a long list of Twitter tantrums — behavior that, prior to November 8, 2016, would have been considered unpresidential.

And Trump's behavior on Twitter has also caused some fairly blatant cognitive dissonance among his staff, who really want you to know that his tweets are insignificant and unimportant, not worthy of news coverage — except when they send a meaningful message that "speaks for itself."

At a White House press briefing, deputy press secretary Sarah Huckabee Sanders responded to a question about the divergent talking points on Trump's tweets by claiming that they do "matter, in the sense that it gives him a communications tool, again, that isn't filtered through media bias, but at the same time I do think that the media obsesses over every period."

But after a follow-up question about whether the tweets are "presidential statements," Sanders replied with a frown, "That come from directly from the president's Twitter account? No."

WATCH: “This obsession with covering everything he says on Twitter and very little what he does as president…” -@KellyannePolls pic.twitter.com/iyS3WnHoxh

CONWAY: But, you know, this obsession with covering everything he says on Twitter, and very little of what he does as president —

MELVIN: Well, but that's his preferred method of communication with the American people.

MELVIN: Well, he hasn't given an interview in three weeks, so lately, it has been his preferred method.

Characterizing the coverage of Trump's tweets regarding policy matters as an "obsession" carries an obvious connotation. People are rarely accused of being "obsessed" with something when that thing is deemed worthy of outsize attention; it is only when the subject is considered frivolous that others attempt to belittle the effort to study it.

Notably, Conway's husband offered his own response to Trump's tweet against the Justice Department, indicating a belief on his part that the posts do indeed merit attention — though he did declare soon after that he "still VERY, VERY STRONGLY [supports] POTUS, his Admin, policies, the executive order ..." as well as his "wonderful wife."

And the dismissal of significance from Sanders and Conway might hold a little more water were it not further juxtaposed with press secretary Sean Spicer's repeated insistence to the White House press corps that any given tweet from his boss "speaks for itself."

So, Trump's tweets mean nothing at all — except for when they mean everything all on their own.

And except for when Trump has been hoist with his own Twitter petard in the courts, where his ramblings have come back to haunt him on his travel ban.

The absurdity and ineptness of Trump's communication on Twitter is put into stark relief by a bot — cleverly named RealPressSec and created by technologist and coder Russel Neiss — which turns tweets into official-looking White House statements. The results are worth a laugh, although it is simultaneously sobering to realize that actual administration statements are often not much stronger.

Whatever the White House's talking point of the day is regarding Trump's Twitter usage, his rash and petulant social media communications will indeed continue to be newsworthy, because occupying the highest office in the land means every word you utter is likewise elevated.