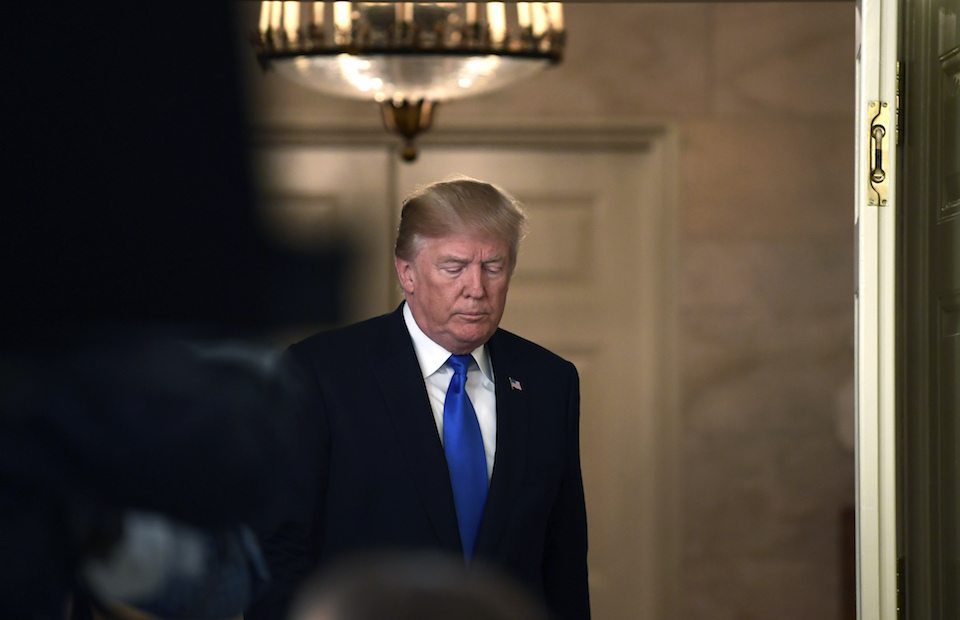 In the shadow of the widening investigation into multiple accusations of sexual harassment and assault against Hollywood mogul Harvey Weinstein, the man occupying the Oval Office has just been hit with a subpoena for his own alleged sexual abuse.

From Hollywood, California, to Washington, D.C., abusive men in positions of power are finally getting some much-deserved and long-awaited comeuppance.

It was less than two weeks ago that a bombshell report in The New York Times made public for the first time multiple accusations, over years and years, of sexual harassment and assault against Hollywood producer Harvey Weinstein. Days later, reporter Ronan Farrow published a harrowing series of accounts from a number of Weinstein's alleged victims.

As Farrow noted, rumors of such behavior had trailed Weinstein "for more than twenty years," and was "an open secret to many in Hollywood."

Weinstein was fired from his eponymous production company immediately following the Times' and the New Yorker's reporting, and has also been expelled from the Academy of Motion Picture Arts and Sciences.

And now another powerful man whose serial and heinous sexual abuse of women has been common knowledge for a long time, yet wasn't enough to prevent him from attaining the presidency of the country, is facing down his own potential requital.

Donald Trump has been accused of various forms of sexual harassment, abuse, and assault for years, by over a dozen women. And considering the entire world heard him on tape boasting about doing exactly that, Trump hardly has room to deny that this is who he is.

His insistence that every woman who has ever accused him of misconduct or abuse was lying, and that he would sue them over it — which he never did — flies in the face of everything we know about him and his disgusting treatment of women and girls anywhere near him.

Now, one woman is putting Trump on the spot. In October 2016, Summer Zervos, a contestant on Trump's reality TV show, accused Trump of groping her and making lewd comments. Trump, of course, called it a lie, and Zervos responded by suing him for defamation.

And a lawsuit means a subpoena: As Buzzfeed reports, the subpoena, which was issued in March but just recently made public, asks for "all documents from his campaign pertaining to 'any woman alleging that Donald J. Trump touched her inappropriately.'" Zervos' lawyers also asked for all documents related to the numerous other women who have lodged accusations against Trump.

Trump must respond to the subpoena by October 31. And as Shareblue Media's Executive Editor Jess McIntosh noted, the Weinstein scandal and his immediate subsequent shunning may offer a ray of hope regarding just deserts for Trump.

"Maybe no one's immune," she noted. "Hopefully, we see some justice there, as well."

Powerful men, like Weinstein, Trump, Bill Cosby, Bill O'Reilly, Woody Allen, and far too many others, think they can get away with predatory behavior because their victims are often frightened or intimidated into staying silent.

But as more and more women feel brave and safe enough to speak out in each new case, hopefully that can serve as both a signal of support to other victims, and a warning sign to other men who think their wealth and fame mean they can behave abominably and walk away scot-free.

Not even the president can ignore a subpoena, after all.